It's Wednesday, which means it's our penultimate day on the island.  Instead of traveling to far flung beaches, we make it a day for relaxing at home and visiting friends. We ate a light breakfast at home on the porch at Caribella, then walked again up and down Barnes Bay.  Already we can see changes in the shape of the beach.  Our swimming cove sand is building up, while in front of Mango's the sand has been quickly eroding to the tune of more than two vertical feet. 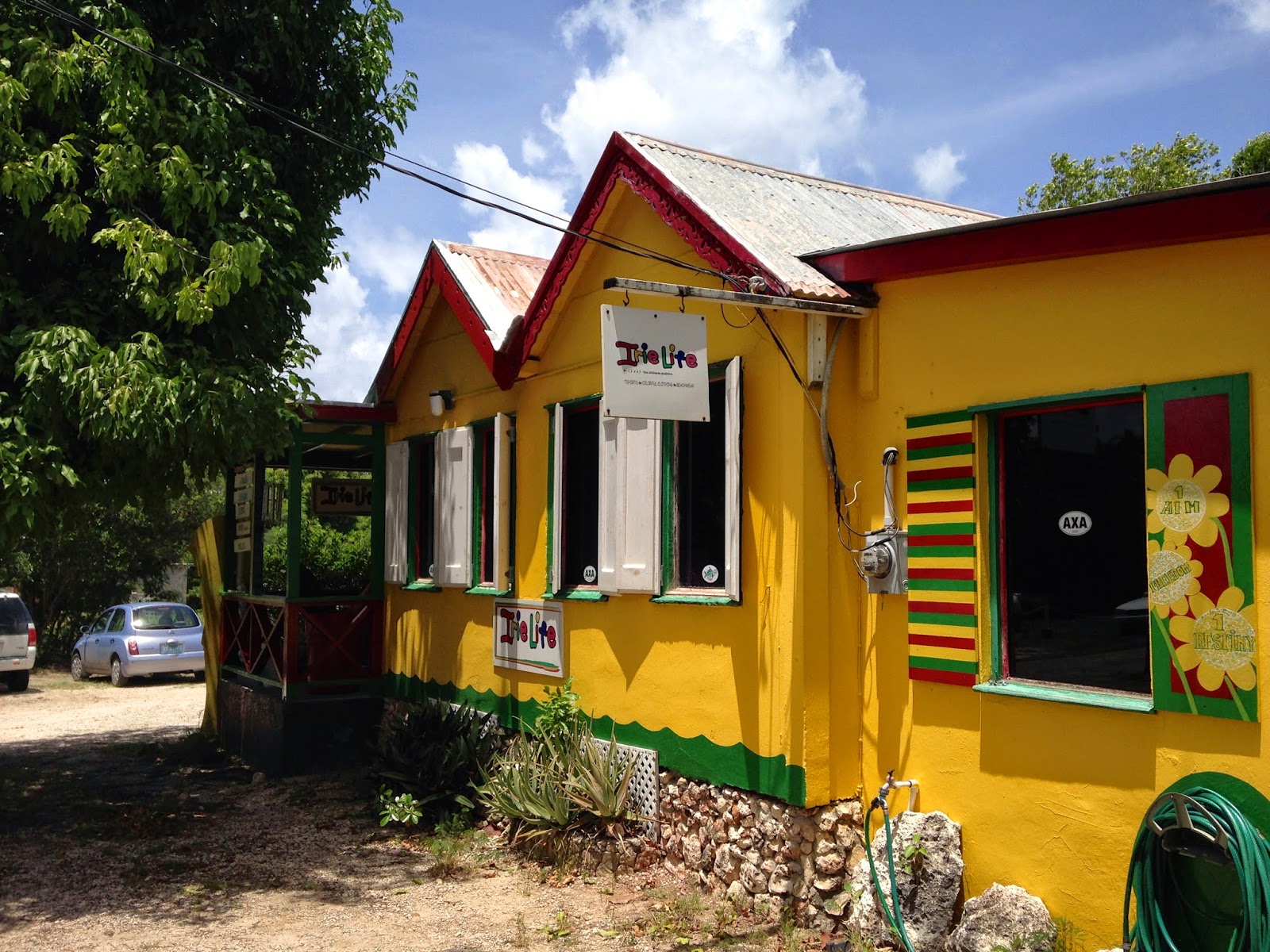 Around 10:45 we hit the road for Irie Life again so that DH can pick up two more copies of his favorite AXA baseball cap.  He's terrible about losing them, so it's a good idea to stock up. By then it was time for us to head to Crocus Bay.  We had a date with our friend Andrea for lunch at the DaVida Bayside Grill,  a place we hadn't visited in a few years.  Am I ever glad we gave that place another chance!  Turned out to be rather nice for lunch, with good food, plenty of shade, and a nice breeze coming off the water. 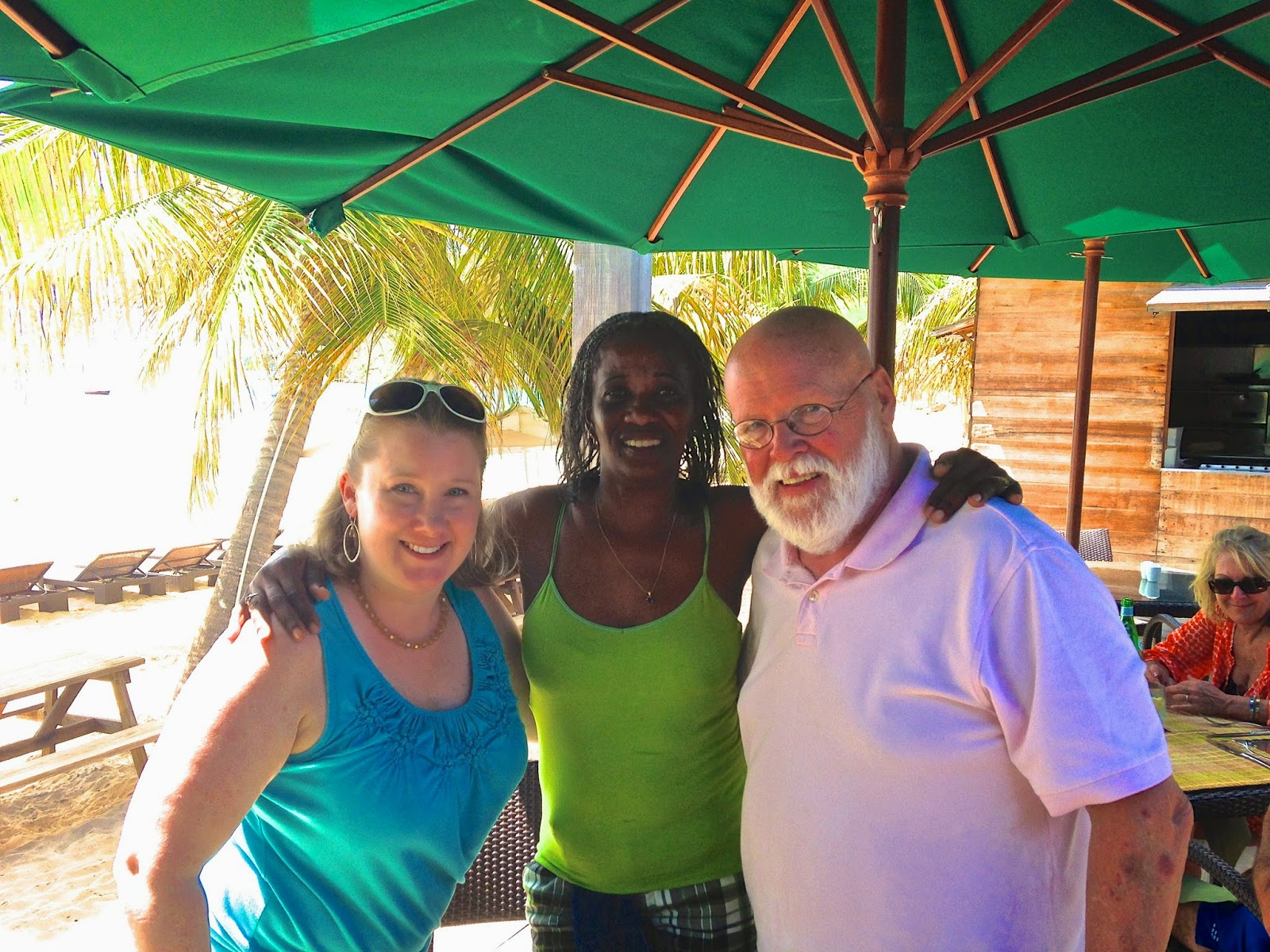 I had the fish sandwich, which was grilled panini-style, Andrea had the chicken salad, and DH has his usual hot dog.  I swear, the man is practically incapable of ordering anything else if a hot dog is present on the menu. Both the fish sandwich and chicken salad were quite good and the portions were ample. We had a good time catching up with Andrea, mostly talking about work and family and the ups and downs of both.
After a while, Andrea had to head out, but DH and I remained to take advantage of the chairs and we sat in the shade to finish our books.  While waiting for DH to finish his, I walked along the beach and made some photos.  It was really beautiful there, and with the greenery on the hillside reflecting downward, the water at that end of Crocus Bay is greener looking than anyplace else I've seen on the island. 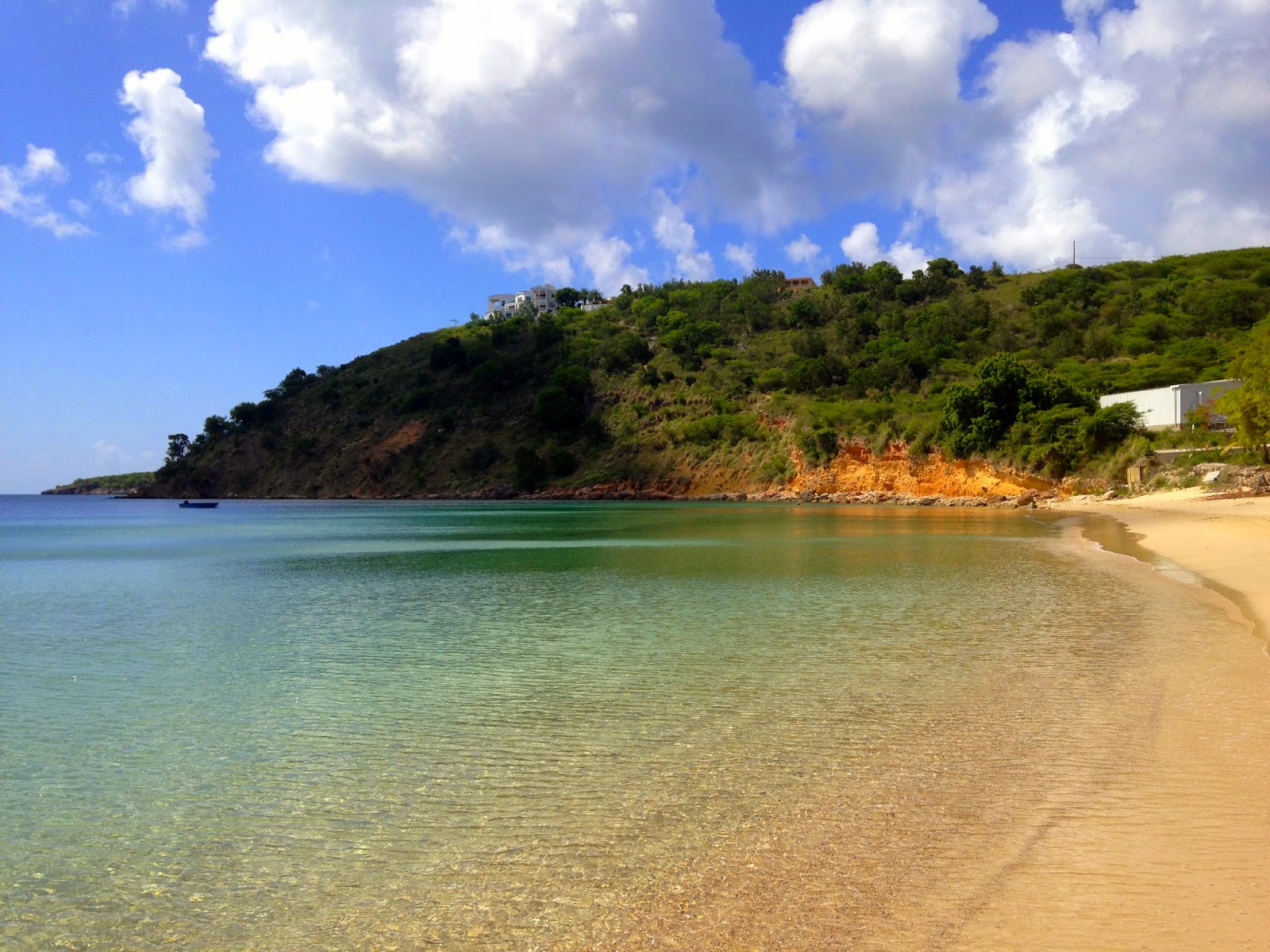 Late afternoon, we packed up, but not before deciding that DaVida and Crocus Bay definitely need to be added to our usual rotation of places we enjoy. Just goes to show that any restaurant can have an off day and that redemption can be found in a second visit. And speaking of second visits, we knew we couldn't leave the island without a second visit to Pamela at Sea Spray, so we stopped there on our way home.  It was time to try the White Sands smoothie, which apparently is known far & wide throughout the island.  I'd always chosen one of the fruit flavored smoothies before, as I sometimes feel that coconut flavored things are hit-or-miss -- but when Pamela told me that it was made with pure coconut coconut cream, I was sold.  Well, all I can say is that I may never order any other flavor again. I'm a White Sands girl all the way!
Again, we sat and chatted until it was almost time for Pamela to close up shop, then bid her adieu until next trip. On the way back to Caribella, we stopped by Rendezvous to make some photos, take a little sand, and say goodbye to our favorite beach. 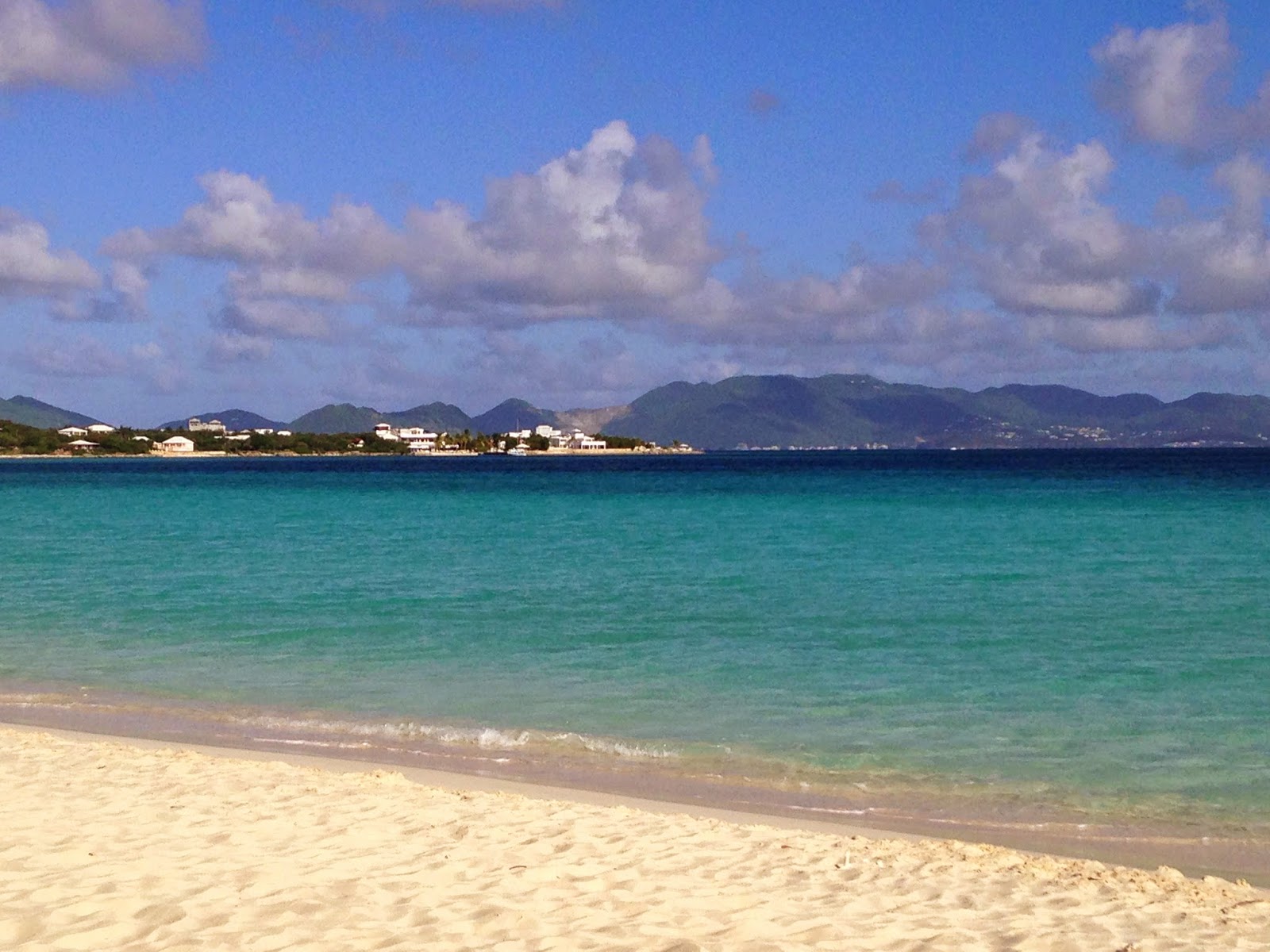 Then it was time to head to Blanchards Beach Shack to pick up dinner. I have become a big fan of this place because the food is good and reasonably priced, and not least because of the ways they're reducing their eco footprint.  It's the only place I know on the island where the disposable cups and cutlery are derived from corn (and are therefore biodegradable), not plastic. 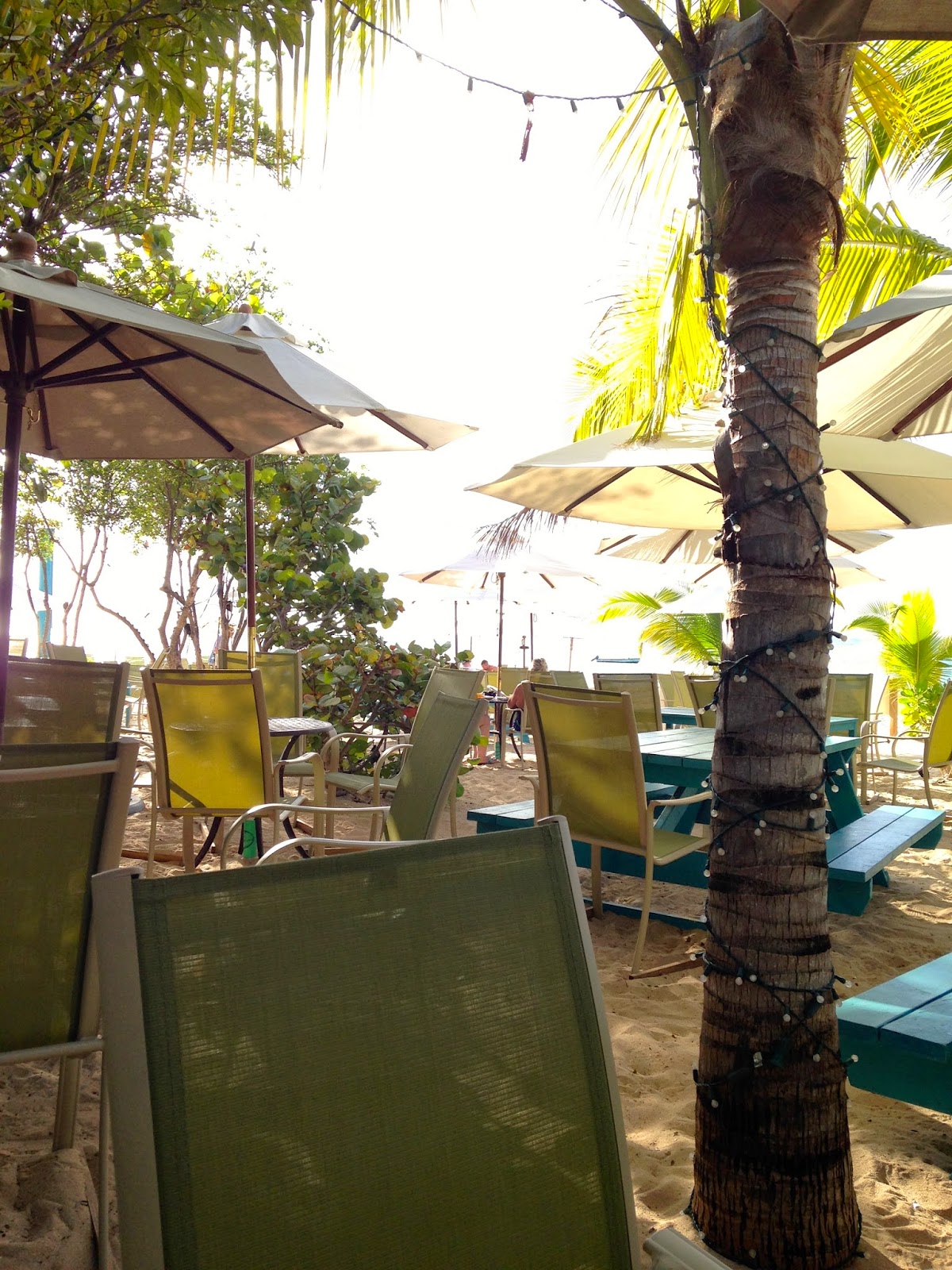 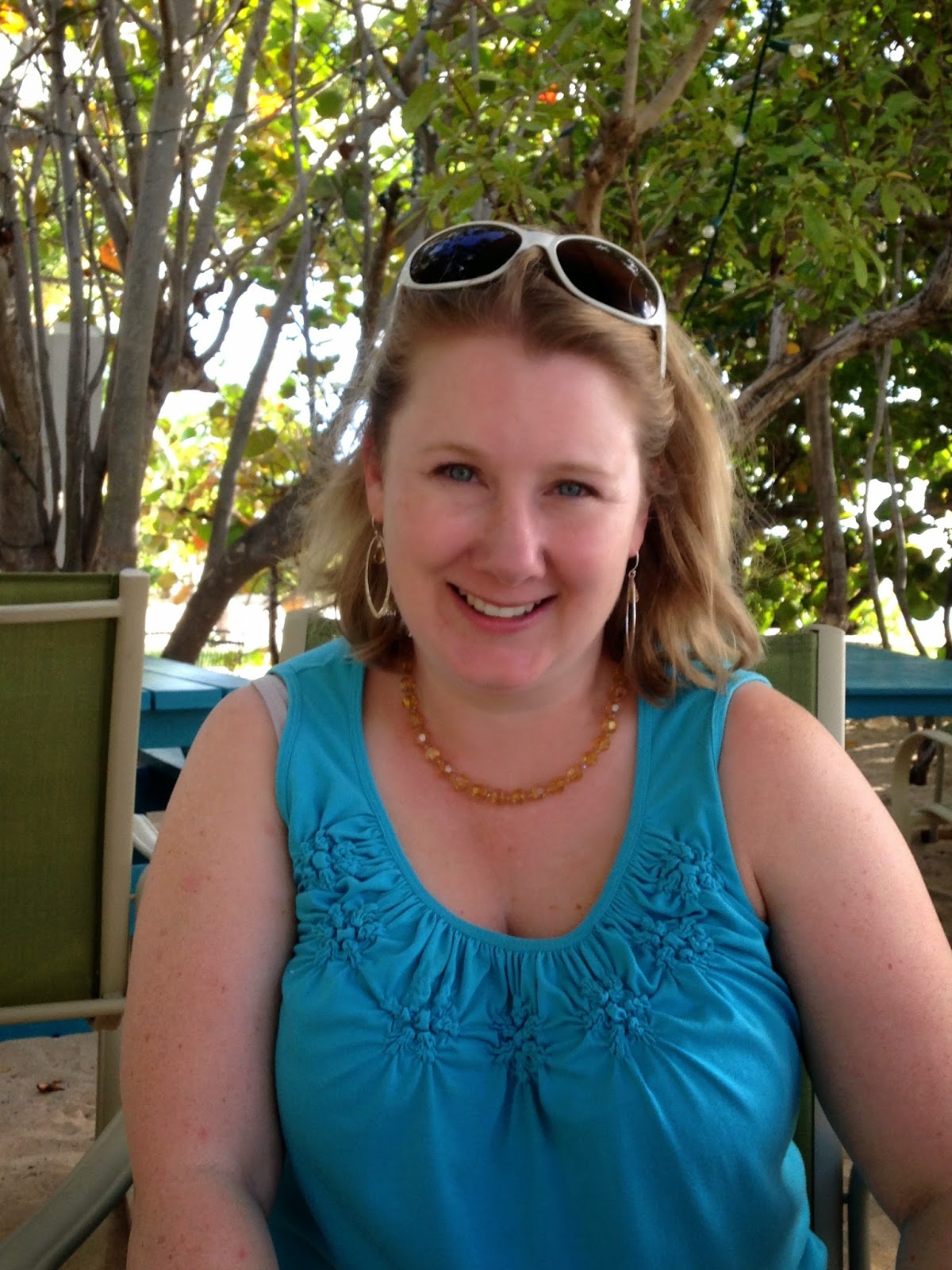 We've occasionally regretted our choices from the Beach Shack -- not because the food wasn't good, but because we didn't choose foods suitable for keeping in the fridge for a couple of hours before eating.  This time we chose wisely: a Caesar salad, some chicken wings, and a shrimp poboy (which somebody recommended on a travel forum about one week earlier, for which I'm grateful). The salad was good and big enough to share, the wings were fine, but my shrimp po-boy, dressed in the Blanchards' homemade sauce that was redolent with dill, was excellent. Succulent and cooked perfectly, the crispness of the shrimp was balanced by the creaminess of the dilled dressing, and as you can see, the sandwich was stuffed to overflowing. I definitely recommend it! 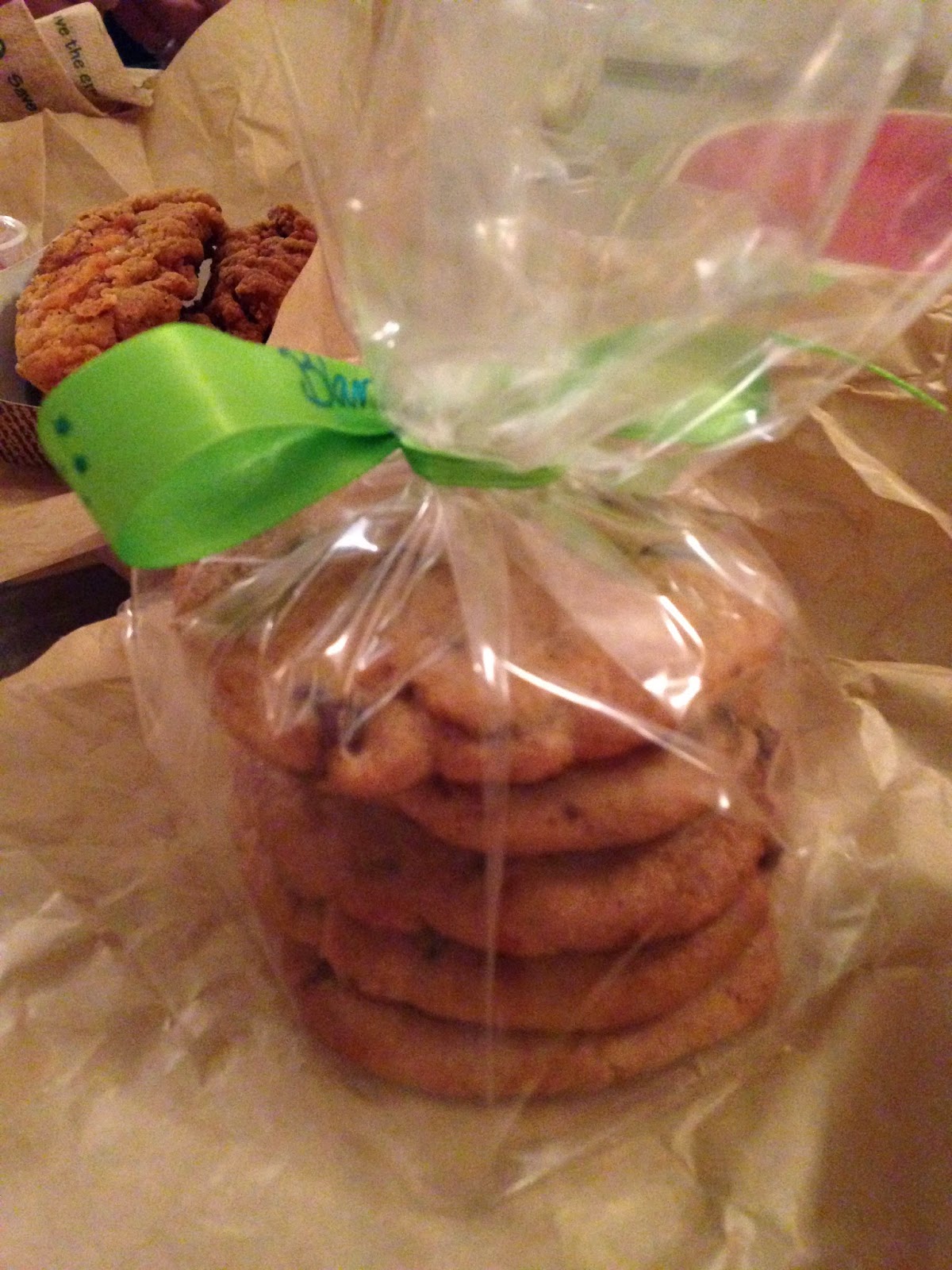 We watched the sunset, accompanied by some of their chocolate chip cookies (still warm when we bought them) and some bourbon, and sat together, plotting our last perfect day. 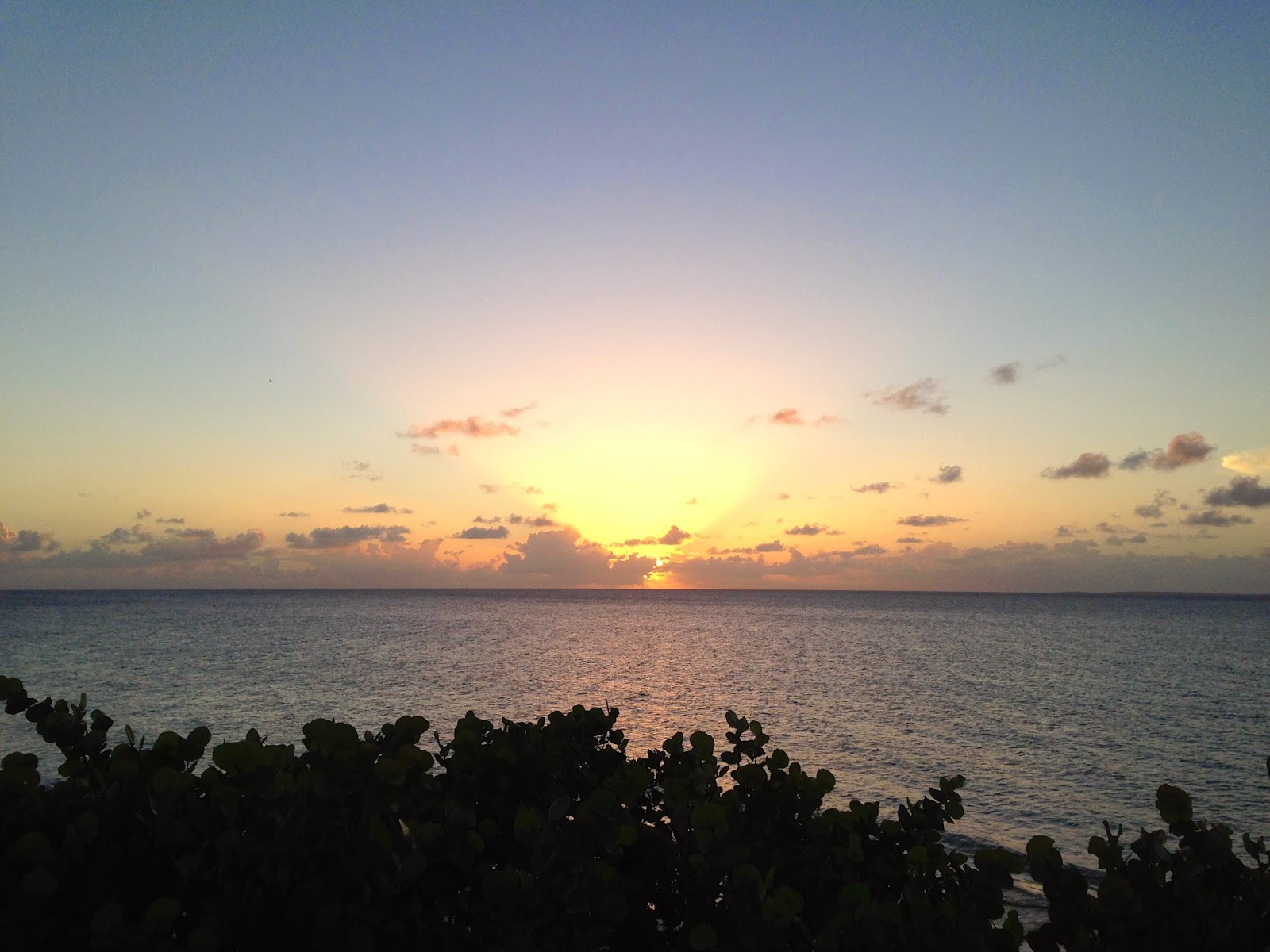 Posted by As the Crowe Flies and Reads at 10:25 PM