Love in the time of Victoria...Queen Victoria, that is.

I have been meaning to post about this book for the last few months, as it was a book I mentioned on the radio for the Round Table book discussion on WAMC back in January, but I'm afraid real life derailed the blog for a while. But noticing the display of Lewis Carroll books at the Odyssey today prompted me to dig this up to post.

ALICE I HAVE BEEN by Melanie Benjamin is a new(ish) hardcover novel that is the ingenious imagining of the inner life of Alice Liddell, the real life little girl who was the inspiration for Lewis Carroll’s Alice's Adventures in Wonderland and Through the Looking-Glass and What Alice Found There. Now I have to confess that I’m a huge fan of the Alice classics--I read the books so often in my childhood that I took to reading them backwards AND upside-down just to keep things interesting. The poem "Jabberwocky" was the first poem I ever memorized (quite possibly the only poem I ever memorized) and I can recite it to this day, but this novel is so vividly imagined and compellingly told that you wouldn’t have to be obsessed with Lewis Carroll to reap lots of enjoyment from the novel. It opens in 1932 when Alice is an old woman, reflecting on her life and how the public identification as Alice in Wonderland has affected her. The author deftly interweaves known facts into the fantasy of her conjectured story, and my curiosity was roused to the point that I actually did a few Google searches to sift through the narrative for fact vs. fancy (Alice did meet Queen Victoria's youngest son whilst he was attending Oxford, but there's no evidence that he courted her, for one example).

I found Alice Liddell’s childhood the most compelling section, where we see her interactions with Charles Dodgson, the Oxford mathematician who would go on to write the Alice books under the psyeudonym of Lewis Carroll. The author does an amazing job of maintaining a very delicate balance between a sweet, avuncular relationship and a predatory relationship between the two, and it’s clear that however ambiguous their friendship is to the outside world, the two of them find mutual comfort and understanding with each other.

It’s the section where Alice is a young woman that is so heartbreaking to me, which picks up several years after the rift between Dodgson and the Liddell family. Tired of overanalyzing the relationship that shocked the entire Oxford community, Alice retreats into the comfort of hazy memories and finding order in the strict ideas of Victorian fashion and decorum, preferring not to dwell on that universal great mystery of just how narrow the chasm is that separates childhood from adulthood. Ultimately this spellbinding novel is a meditation on the sorrows and losses on both sides of that chasm, which makes it such a satisfying read.
Posted by As the Crowe Flies and Reads at 8:18 PM No comments:

Close encounter with another favorite author!

April 15 is a date most Americans dread, but 2010 is a year that I, for one, will have happy memories of Tax Day. I was fortunate enough to meet Yann Martel at the NEIBA (New England Independent Booksellers Association) offices in Arlington, MA, who was in town doing an event at a Boston-area bookstore. Michael Kindness, one of our sales reps from Random House, arranged for the opportunity for us to get books signed, so while the Odyssey Bookshop wasn't able to book Martel for an event of our own, we could still get signed books for our customers, particularly those in our First Editions Club. (Give us a call or visit our website at www.odysseybks.com to order a signed one--limited quantities!) 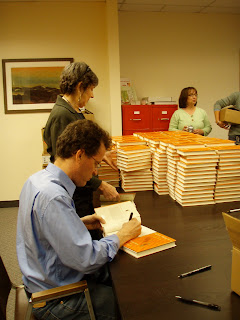 Yann Martel signs his new book. To the tune of about 350 copies!

I eagerly devoured Beatrice and Virgil a couple of months ago in the Advance Reader's Editionformat, having loved Martel's previous novel. As with Life of Pi, Martel puts animal allegory to good use again, layered over a postmodern meta-fiction structure. Ostensibly about a writer named Henry who has lost his creativity after hitting it big with a critically-acclaimed AND commercially successful novel, the book is actually an exploration of how inadequate words are to describe the Holocaust. In fact, Martel suggests, the only way one can convey the true horrors of this world is by coming at them obliquely, not directly. This novel is so haunting and provocative that I could not stop thinking of it for days.

You know how it feels impossible to describe the look, feel, and taste of a food another person has never encountered? There is a seven page passage of this novel that will serve as the ruler against which all future food descriptions will be measured and found wanting, in which Virgil (a Howler monkey) describes to Beatrice (a donkey) *exactly* the various aspects that give a pear its "pearness." This passage alone stands out, but there are dozens more, scattered throughout, that highlight Martel's facility with prose that is beautiful, concise, and often cutting.

By the time I got to the epilogue, the Games for Gustav section, I felt utterly sucker-punched. I read the Games section hurriedly straight through the first time. The second time I paused and considered the implications of each game through Virgil's & Beatrice's eyes. The third time I read it, tears coursed down my cheeks, as the utter impossibility of answering each question of the games really began to sink in. This book is as serious, agonizing, visceral, and immediate an encounter with the Holocaust as I've ever experienced, in book or film format. 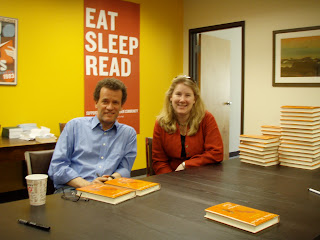 Here's a shot of Martel and me after most of the books had been signed.

Posted by As the Crowe Flies and Reads at 1:38 PM No comments:

I turn to fiction when I want to understand...

I work in the nearby town of South Hadley, MA, which made national news recently with the sad, sad story of a young high school girl from the local high school who committed suicide. It later came out that she had been bullied relentlessly by her peers, both physically & verbally, and even online. Allegedly a number of the bullies even bragged about how miserable they made the poor girl's life. I'm a good 20 years removed from high school myself, and while I never experienced the cruelty that Ms. Phoebe Prince suffered, I recently read a young adult novel that enabled me to relive every taunt, every nasty aside, even the few (minor) physical assaults that accompanied me through middle school and high school:

BY THE TIME YOU READ THIS, I’LL BE DEAD by Julie Anne Peters. Daelyn Rice is a girl bullied by her peers and misunderstood by her parents when she discovers a website called Through-the-Light. There she meets other teens who are assigned a “Date of Determination,” a date by which, if their lives do not improve, they plan to commit suicide. Follow Daelyn as the website counts down to her D.O.D and she recalls the endless stream of abuse from her school peers and her "Fat Camp" counselors--abuse that the perpetrators intimidated her not to reveal. This raw, horrifying and tragic book couldn’t come at a more pertinent time to our community, mourning a similar loss. If you think bullying is no big deal, read this book and think again. It's corrosive, damaging and pervasive.

Posted by As the Crowe Flies and Reads at 9:40 PM 1 comment: