Once More Unto the Breach: Shakespeare Sunday Despite the fact that Michael woke with a seriously nasty head cold on Sunday morning, we powered on because we had a date at the new Shakespeare’s Globe Theatre. In fact, when we bought our tickets to Henry V months before departure, it was the first concrete plan we made for our vacation. Henry V is my favorite of the history plays, and about a month before our trip Michael humored me by watching the very fine Kenneth Branagh film adaptation. 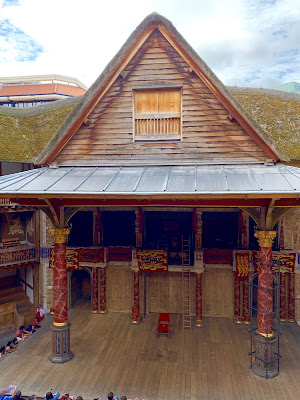 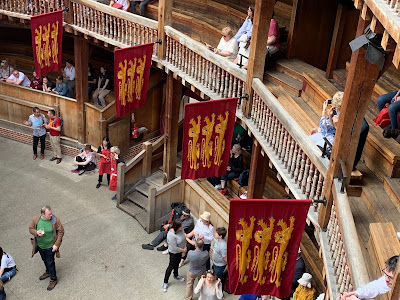 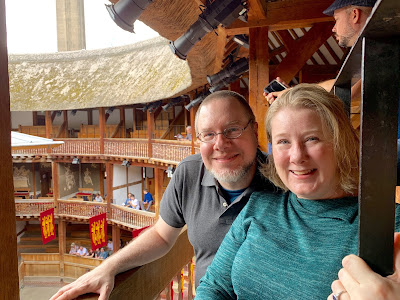 We opted for front row seats on the upper tier. Certainly a more authentic experience might have been the groundling tickets, but we are definitely of an age where standing for hours on end in the sun or rain no longer holds appeal. So armed with tissues and cough drops, we climbed to the upper deck to await the play.


Even if Henry V hadn’t been my favorite history play, we would have been intrigued with the staging, with many of the lead roles having gender reversal. Sarah Amankwah, the woman who played Henry, was absolutely captivating and I wouldn’t be a bit surprised for her to become a household name in the future.

Other than a very annoying seat mate who apparently felt the need to mansplain the entire play to his companion, we loved the experience.  We enjoyed a lemonade during the intermission and dove right back in. Unfortunately for the groundlings, that’s when the weather turned cold and rainy, so we were quite thankful for our covered seats - not to mention happy that we rented the cushions for our derrieres.

After the show, I had the marvelous good fortune of meeting up with an old friend from college. Marci is an architect who’s been living in London for well over a decade. She met us outside the theatre and we walked down to the Tate Modern together after lots of hugs and squealing.

I confess that I didn’t have much use for the exhibits at the Tate, but the views from the top floor were exhilarating. Marci’s art and design background did help give context for some of the exhibits, which was interesting. After wending our way back down to the ground level, we took an Uber to the Shoreditch neighborhood so that Michael and I could see Marci’s studio, meet her husband Emory, and enjoy an early tapas dinner.

The four of us ate scrumptious foods and drank a delicious wine and decided that we weren’t quite ready to part ways yet. So we wandered around the neighborhood for a while, with Marci and Emory pointing out interesting bits of architecture and street art. We decided that we were still hungry, so they directed us to their favorite Vietnamese restaurant. Despite having had tapas less than an hour earlier, we ordered broadly off the menu and sampled nearly a dozen dishes among us.

By 8:00, Michael’s energy was fading quickly so we parted ways with lots of hugs so that we could head home to Notting Hill, stopping first to get some nighttime cold medicine to ensure a good night’s sleep. After all, we had a big day coming up: boat ride on the Thames to Greenwich!
Posted by As the Crowe Flies and Reads at 9:08 PM No comments: