Book Review: Colorless Tsukuru Tazaki and His Years of Pilgrimage by Haruki Murakami 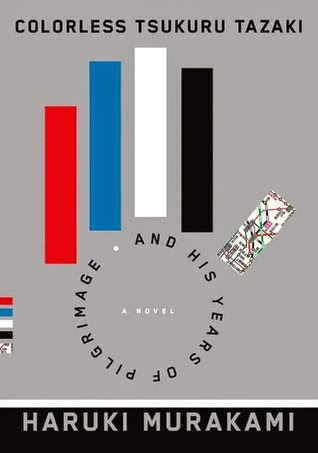 It is a worldwide major publishing event when Japanese writer Haruki Murakami puts out a new book, and even bookstores in the US, a country not precisely exalted for either its love of literature or celebration of other cultures, hold midnight release parties for his books.

This is the story of Tsukuru, who narrates this story as a bachelor in his thirties but spends a lot of time exploring memories from his high school days when he was part of a group of five friends.  Best friends, to be exact, though Tsukuru always had a bit of a complex about his place in that circle.  His lack of self confidence leads him to think of himself as metaphorically "colorless, " a term derived from the names of his friends: each of them has a color in their name except for him.

Tsukuru is the only one who leaves Nagoya to attend university in Tokyo, and after his first year in college, he comes home one weekend, only to be informed, categorically, that none of his friends want to be friends any more.  Tsukuru isn't to call them or contact them in any way, and once the truth sinks in, his descends into a malestrom of depression from which he barely emerges. His friends' rejection of him colors (pun intended) all of his future relationships, or lack thereof.  He is unable to form emotional attachments or lasting relationships of any kind.

Sara, a woman he is dating, encourages him to track down these four friends and confront them with their desertion, to demand why they abandoned him so cruelly, and the second half of the book is dedicated to Tsukuru's efforts to do just that.

While I am glad that I read this novel, because I think it's important to read works in translation and because  I think Murakami is one of the world's most important novelists, I can't pretend that I really understood it. In fact, I've concluded that there is just too wide a chasm of cultural disconnect for me to "get" Murakami at all.  This is the third novel of his that I've read (not including a fourth novel that I never finished), and I don't think I'm any closer to an appreciation than I was before. To me, his dialogue is completely stilted, the depiction of suicide as both prolific and mundane is countercultural to the way most Americans approach or understand it, and the sex scenes are so overtly lacking in anything remotely erotic that I wonder why they're even present.  In fact, they read more like a technical manual.  They are the unsexiest sex scenes I have ever read. Those are just three generic examples from this book of how it didn't work for me as a reader, but I felt that away about the two previous novels of his that I've read, too. This is not, I hasten to add, because I think the American approach to suicide, sex, etc is the correct way and Murakami's is the wrong way; it's just that the American culture is what I know.  I just don't "get" him.

In fact, I feel about Murakami the same way I felt when I was studying French in college and trying to read a short story by Guy de Maupassant or a poem by Rimbaud. I was trying so hard to grasp the surface meaning in a language I was trying to learn that all of the substance underneath utterly slipped by.  That's how I feel about Murakami, except, of course, that here I'm reading an English translation. I'm absolutely convinced that I'm missing a world of meaning in his novels. Still, I'm glad that I put in the effort to read it, and I hope that one of my internet friends will share with me the genius that they see in his work.

My review wouldn't be complete without giving a nod to Chip Kidd for the fascinating design of this book, and a nod to Knopf for the beautiful production values.  Before I saw the actual book, the cover design didn't do much for me, but the physical book is very interesting and well put together. Tsukuru, represented by the "thumb" of the cover design, is shown as a map of subway or train lines (fitting, since he is a designer of train stations, and also for some spoilery reasons), while the fingers are the colors of his high school friends. 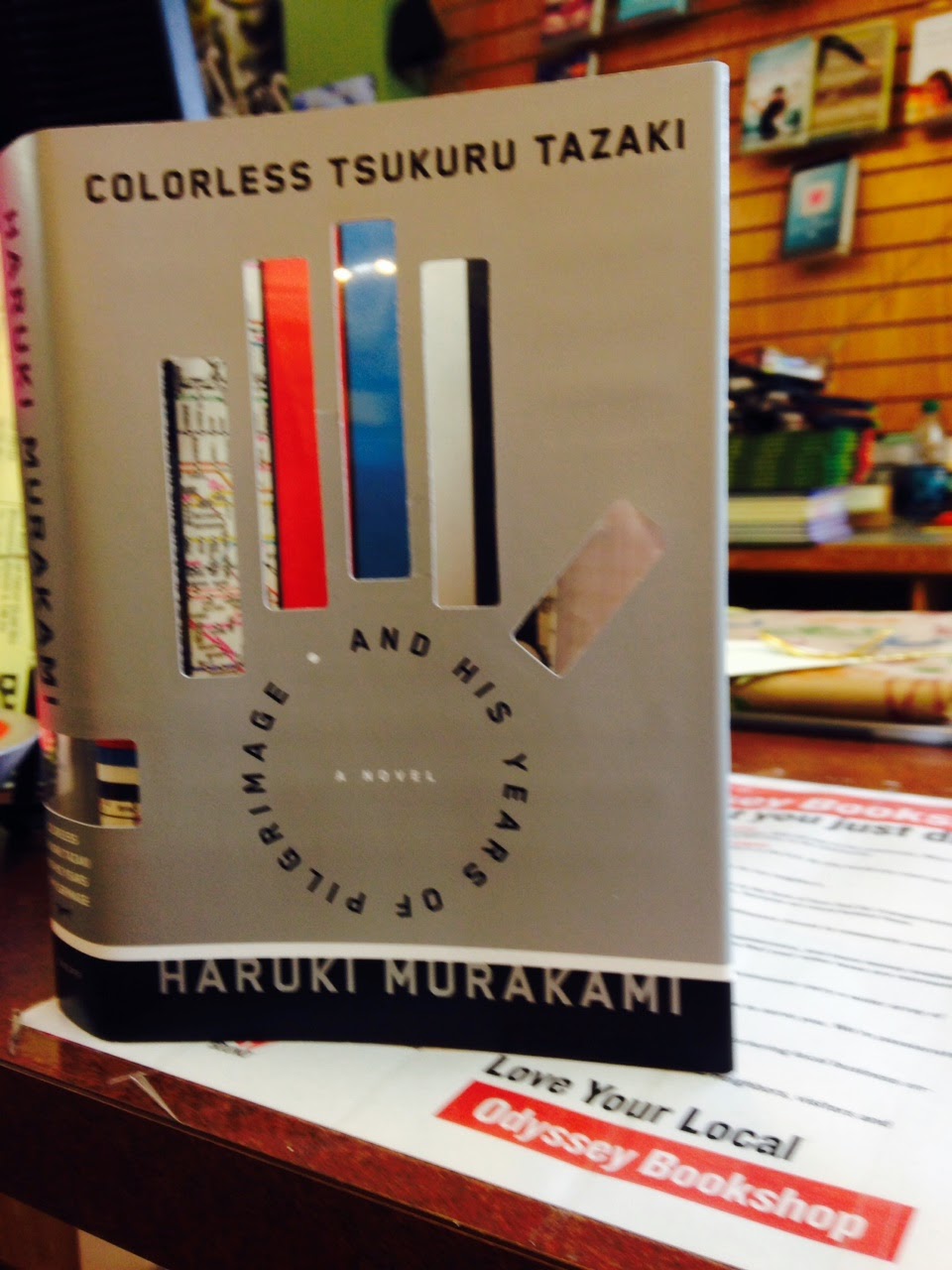 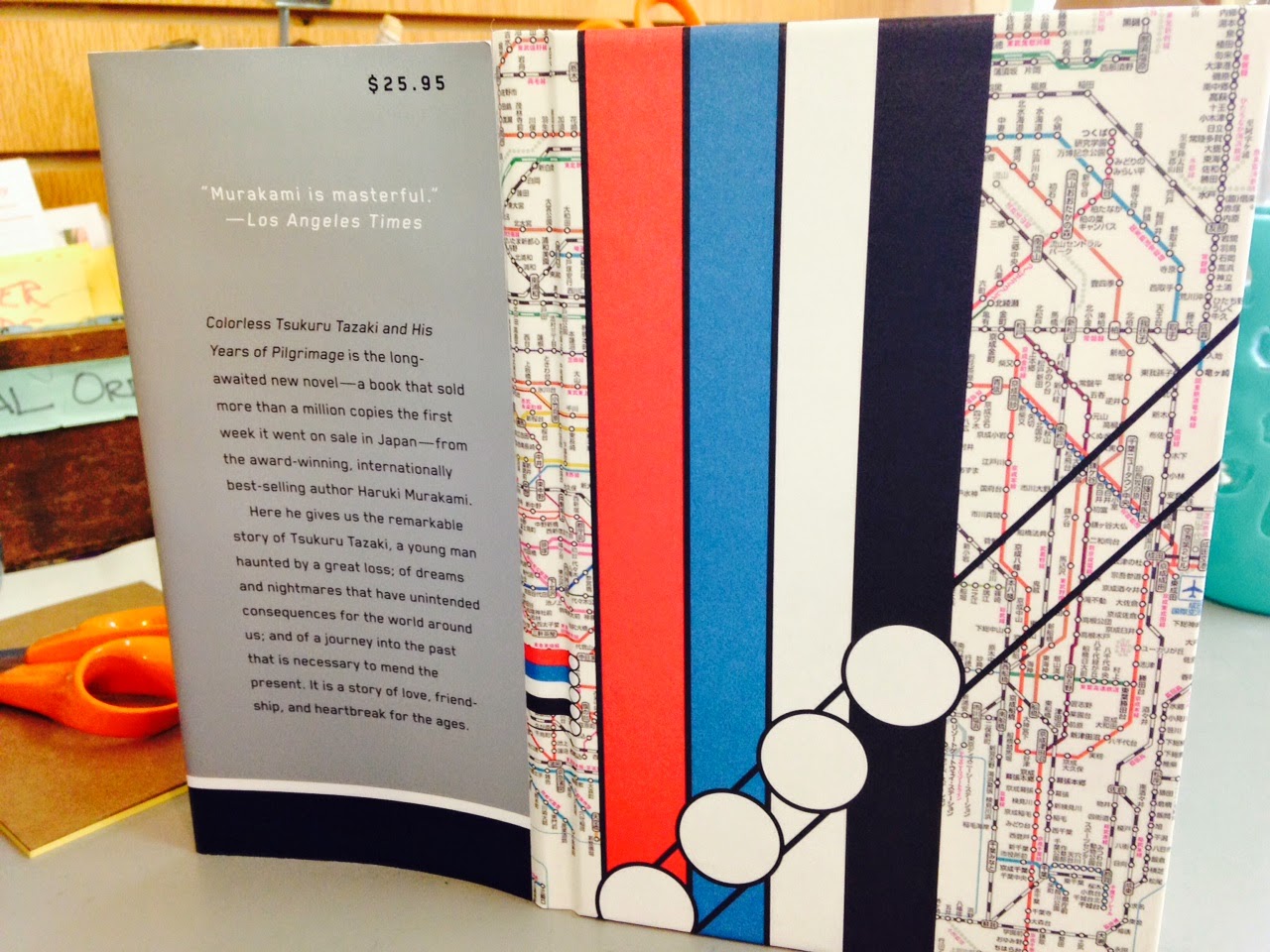 The four lines of the fingers are repeated on the tope of each page, and curiously, the pagination is printed in black with the exception of the number four, which is always printed in white. I have a half-cocked theory about this, but it might be a little spoilery to get into. Also, the endpapers in the book are all different colors: red and blue in the front, black and white in the back. Printing in the various colors, putting together a book like in general, is a very expensive proposition, so extra kudos to Knopf for undertaking it. Be sure to check it out--a lot of thought went into this design, more so than most novels and the book, at least the US edition, is worth seeing in person (for which read: worth buying in the physical format, not as an e-book).

Posted by As the Crowe Flies and Reads at 12:32 AM