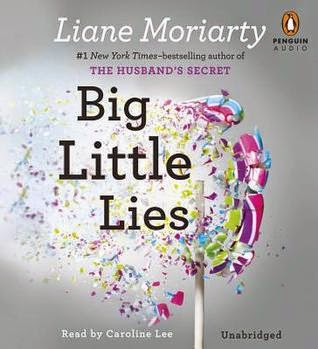 It happens a few times a year: a publisher sends me a comp copy of an audio book that I would otherwise never pick up to read of my own accord, and in the process of listening to it I become terrifically surprised.  Such is the case when my Penguin sales rep, Karl, sent me the unabridged audio of Liane Moriarty's new novel, Big Little Lies, a couple of weeks ago.

I hadn't thought of reading this book, but I'm always willing to listen to books that I wouldn't dream of reading, as I enjoy listening to the audios in my car on my commute each day.  Little did I know just how enamored of this book I would become.

On the surface, the book seems like it could be a mystery: "Pirriwee Public’s annual school Trivia Night has ended in a shocking riot. One parent is dead. The school principal is horrified. As police investigate what appears to have been a tragic accident, signs begin to indicate that this devastating death might have been cold-blooded murder."

Really, though, it's the story of female friendship amidst the perils and politics of modern parenting.

Also, it's Australian. I didn't know the author was Australian until I looked her up.  At first I just thought that the casting of an Australian reader for the audio was a quirky directional choice. Anyway, we've got Madeline, Celeste, and Jane, who are all mothers of children entering the kindergarten class at Pirowee Public, and the novel centers around them, telling their stories in a third person narrative that flits about from one to the other.

Madeline is in her forties, on her second marriage and third child.  She works part time and is that rare bird in this particular Sydney suburb: she is neither a Career Woman nor a Career Mom. She's funny, a little brash, obsessed with clothing and looking good, but she's also extremely loyal and passionate, and it takes the smallest thing to make her outraged. Her kindergarten daughter Chloe is feisty, kind, and imperious in fairly equal measure.

Celeste is a quiet woman who happens to be gorgeous -- not run of the mill gorgeous, but other-people-trip-up-walking-down-the-street-to-do-a-double-take gorgeous.  She's also introspective and a little distracted, unsure of her true worth, and amazed that a vivacious woman like Madeline would want to be friends with someone like her.  It eventually becomes clear just why it is so convenient that her husband travels out of the country frequently for his career, and in the meantime, her hands are full raising their twin boys full time.

Jane is single and the newcomer to Pirriwee, and a good 10-15 years younger than all of the other mothers.  She's hiding a secret about the identity of her boy Ziggy's father, and she's unsure whether to let herself be drawn into a friendship with Celeste or Madeline.  When Ziggy is accused on the first day of kindergarten orientation of choking a little girl, Jane and her son get off to a rocky start with all of the other parents and children.  If it weren't for Madeline championing her the whole way, life would be very lonely and difficult, indeed.

Moriarty positively nails the type of helicopter parent that has made a bad name for parents in this country, and via the character of Madeline she takes delight in skewering them. If this doesn't sound funny and interesting, then I'm just not doing a good job of telling it, because this book is both.  In spades.  In fact, I got so frustrated with the slow pace of listening to the audio that I borrowed the physical book to take home and read instead.  There are lots of clichés in this book, but Moriarty either turns them on their head or paints them in a new light through her humor and wry observations.  I loved the friendship that develops among Jane, Celeste, and Madeline, and I love the come-uppance that happens in the end. The reader, Caroline Lee, is great and she voices Madeline particularly well with a sexy voice and a husky, breathy tone.

Nobody is more surprised than I am that this book resonated with me the way it did.  It's a light and very fast read that occasionally gives way to darker material. Material so dark, in fact, that it might bog down and change the tone of any other book.  In that sense, the book puts me in mind of Joshilyn Jackson's novel, Someone Else's Love Story.
Posted by As the Crowe Flies and Reads at 1:46 AM