In a move that seemed almost completely out of character, we stayed home and ate breakfast on the balcony instead of going to Geraud's. Eggs & toast, coffee, juice, and a gorgeous view.  In fact, we were still lingering there when Vandra came up to clean, so we invited her to join us. She actually allowed that she wasn't feeling too well -- usually she shares the housekeeping duties with another lady,  but this visit she had the responsibility entirely to herself.  We packed up our beach bags and drove Vandra home immediately so she could get some rest and then implored her to take the next day off.  (That's one of the only odd things about Caribella: we feel like we're putting them out when we insist we *don't* need our towels or sheets changed every day. Go figure.)
For a long time, Shoal Bay East was our favorite beach on the island.  Celebrated as one of the most beautiful, not just in the Caribbean, but in the world, it's nearly two miles of the most powdery sand you've ever stepped foot on.  The fact that it's not (yet) dominated by any large resort makes it unusual on Anguilla; instead, there are beach bars and villas and condos dotted regularly up and down its length, and there's a place for you somewhere, whether you're looking to be social or just wanting to soak up some of its bliss in near-solitude.
Normally we would have headed to Shoal Bay East (SBE) by our second or third day on Anguilla, but when we heard that The Place on Rendezvous Bay was going to be closing only half way through our vacation, we decided to make the most of it and go there every day.  So it was a surprise to both DH and me that it was a full week after arriving on Anguilla that we headed for the east end of the island. 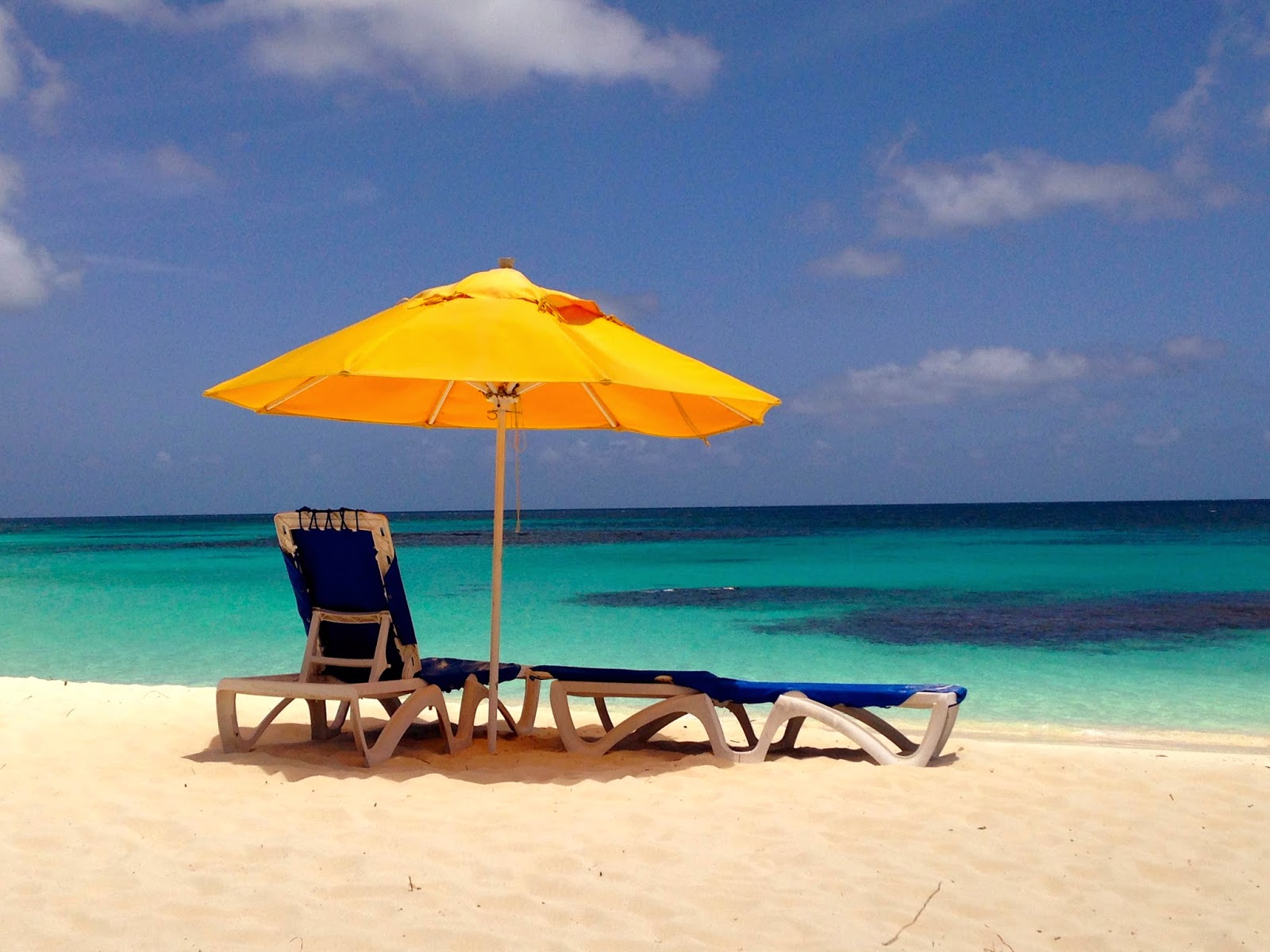 A day on SBE for us will always mean setting up camp at Elodia's (at least, when they're open), and weekends at Elodia's generally mean grilling, so it was with an eager step that we unloaded the car and headed up to greet Carole, one of the ladies who runs it.  We also love the fact that they offer small pavilions with chaises instead of just the usual umbrella -- as we so often seek the shade, this is the perfect set up for us. The fact that it's the prettiest and quietest part of SBE? Well, that's just gravy.

Not long after we'd settled in, a pair of girls and their younger brother came by and asked if I'd be interested in purchasing any of the jewelry.  Looks like the Rainbow loom/rubber band jewelry craze was going full tilt on Anguilla, just like back home in the States!  I picked out a colorful handband that must have taken some time to make, and they offered to throw in a complimentary bracelet in the colors of my choosing.
It's not often that you can find one-of-a-kind pieces of jewelry, custom made while you wait.  At only EC $10, I would have been a fool to turn them down.  So we went up to the main building to order lunch (chicken & ribs combo platter to share) and cool off with some Tings (a regional carbonated beverage made with real grapefruit) and enjoyed the breezes until both our food and my bracelet were ready. 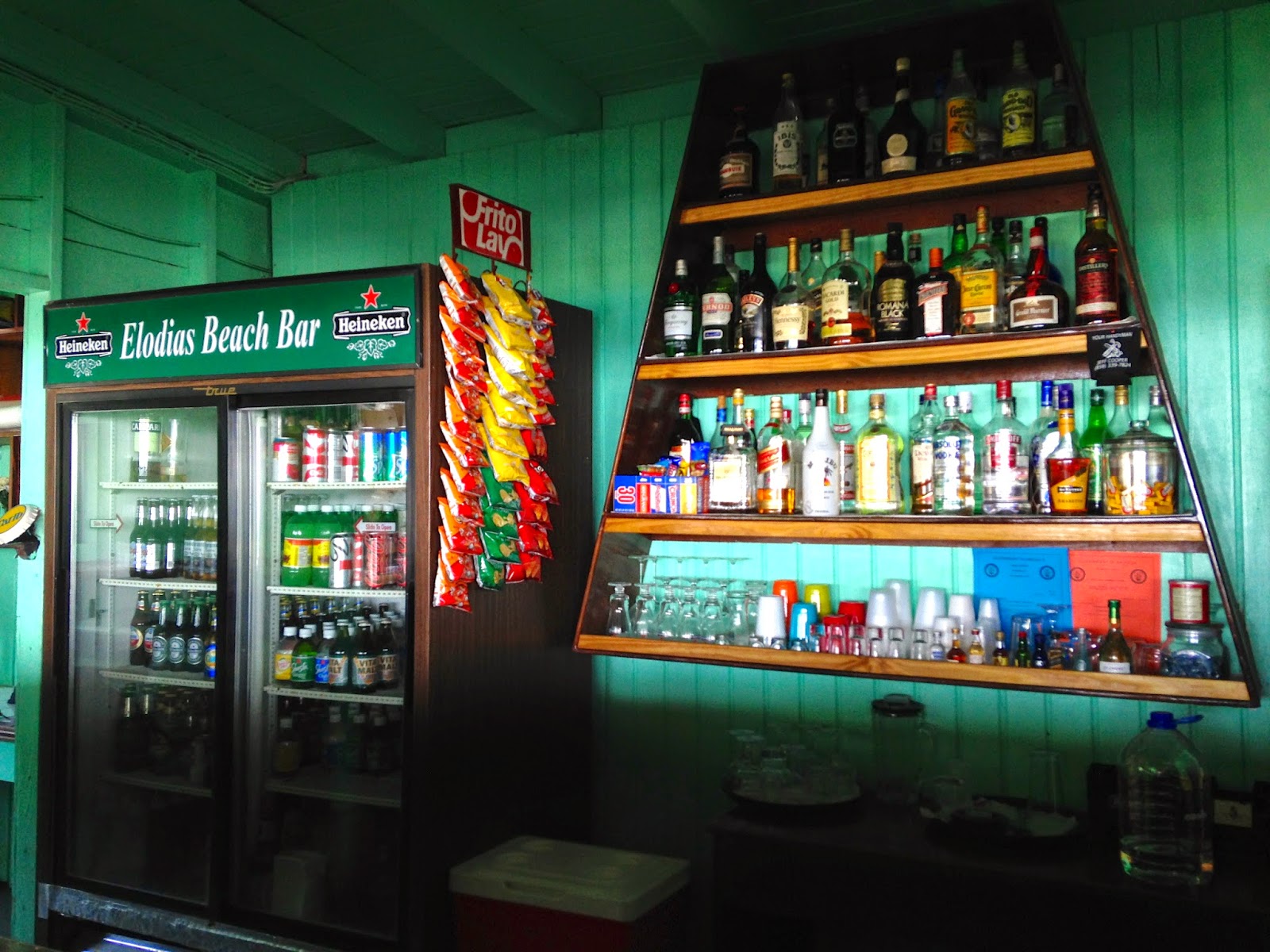 We stayed at Elodia's until late in the afternoon, then headed back to Caribella for our usual swim & sunset routine. Over cocktails we had to get down to a bit of business: we'd been on the island for eight days already and hadn't seen/done/eaten many of the things we wanted to see/do/eat. Thus it was time to make a list and draw up a chart and make sure nothing essential got left off. It can be very complicated when you start calculating which places are closed on which days, etc.  We like to visit our favorite places (Mango's, Straw Hat, Veya -- in alphabetical order) twice for dinner when possible and leave room for others, but now we were down to our last six nights, so it was time for strategy.
Dinner that night was Mango's, which we love for multiple reasons: the food, the ambience, the location, the owners, the staff, and not least because we can indulge as much as we'd like and then simply walk next door to be home. So after taking a handful of post-sunset pics, we walked over to greet Dave & Kim (the owners) and Andrea (only our favorite person on the island. NBD). 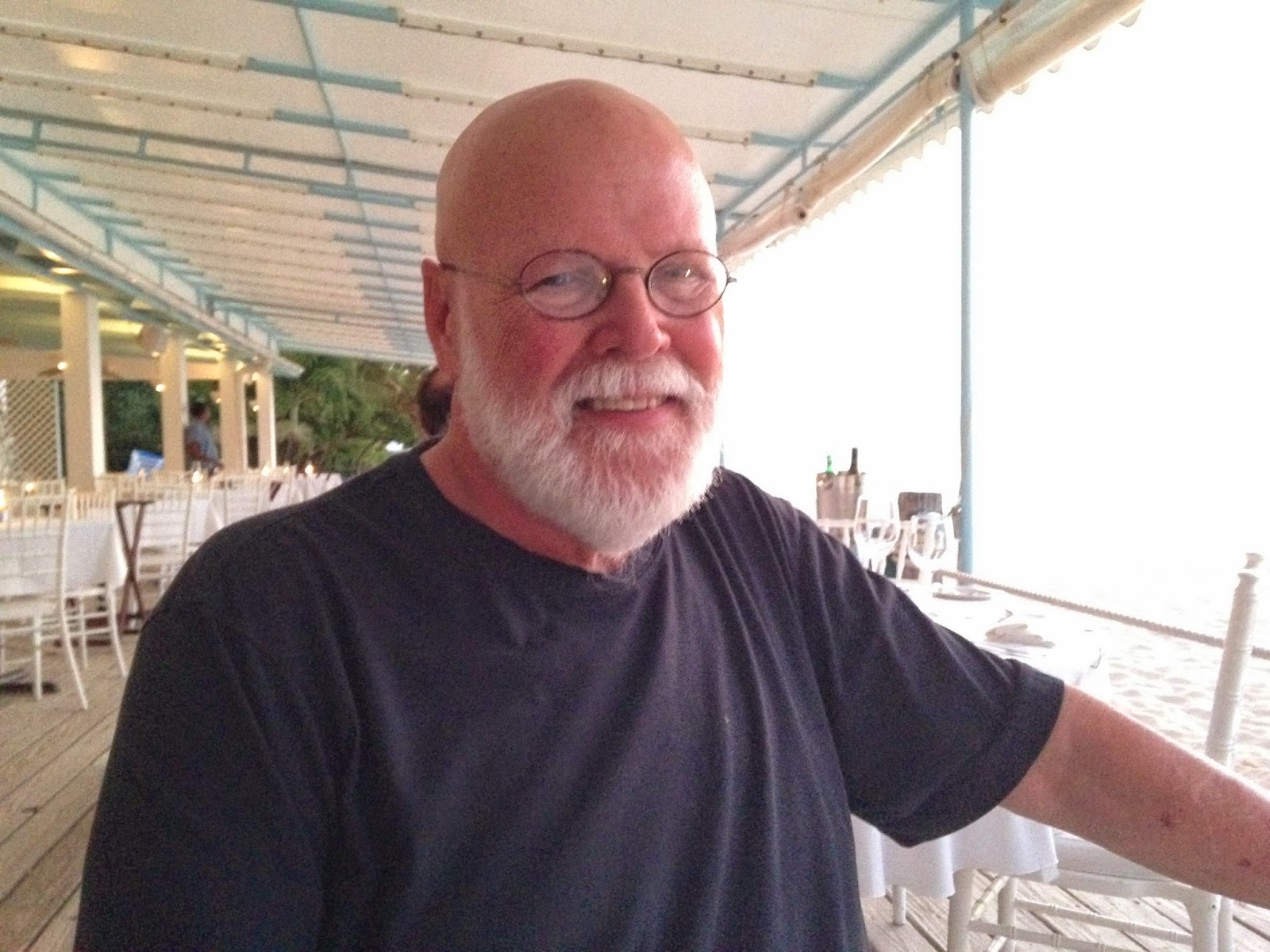 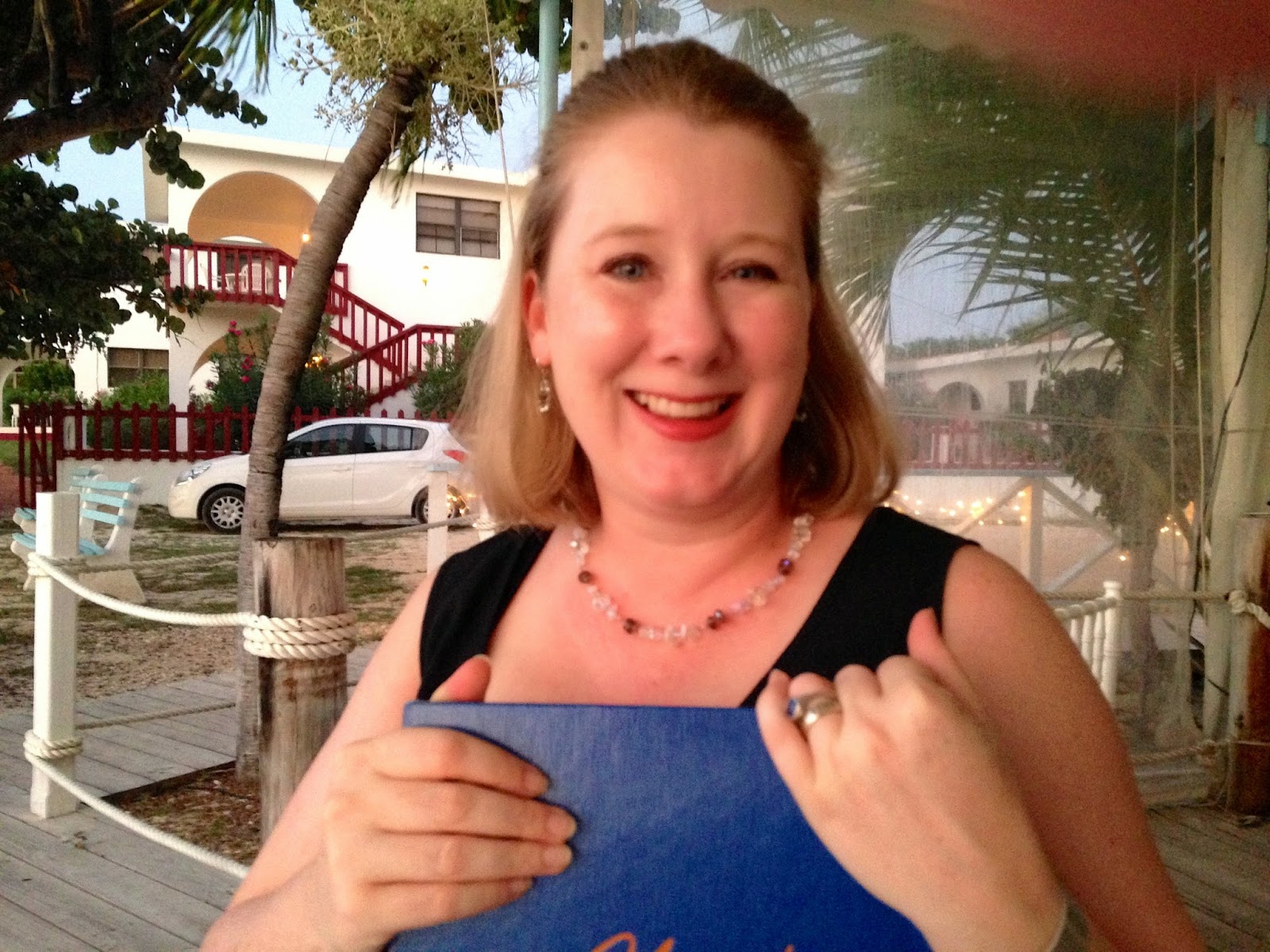 We each tried something new this time.  After discussing trigger fish with Andrea, I opted for that, which is served in an orange caper sauce.  DH decided to try the warm seafood salad special, which frankly I thought sounded awful, but it turned out to be delicious. In fact, both dishes were excellent. 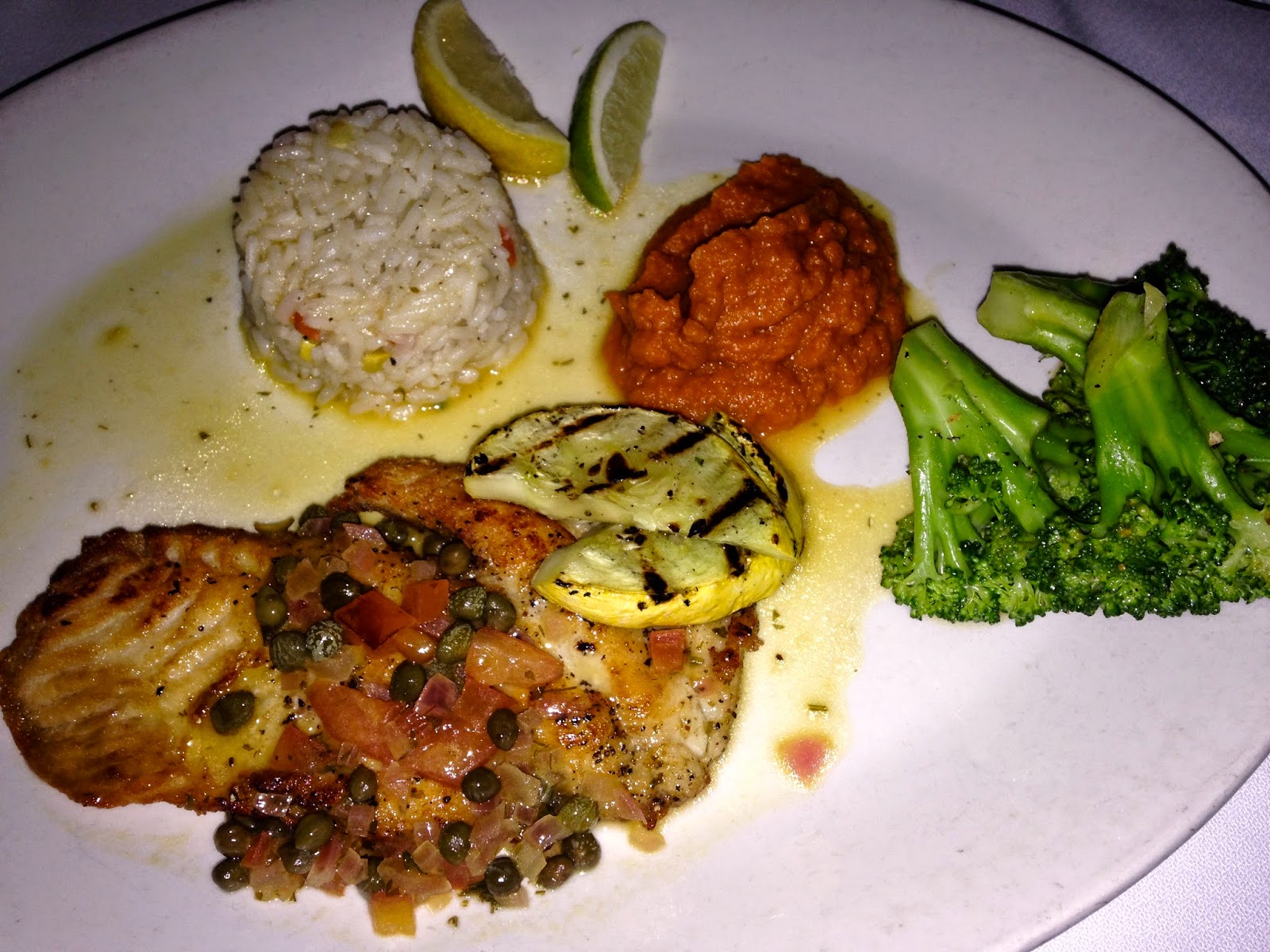 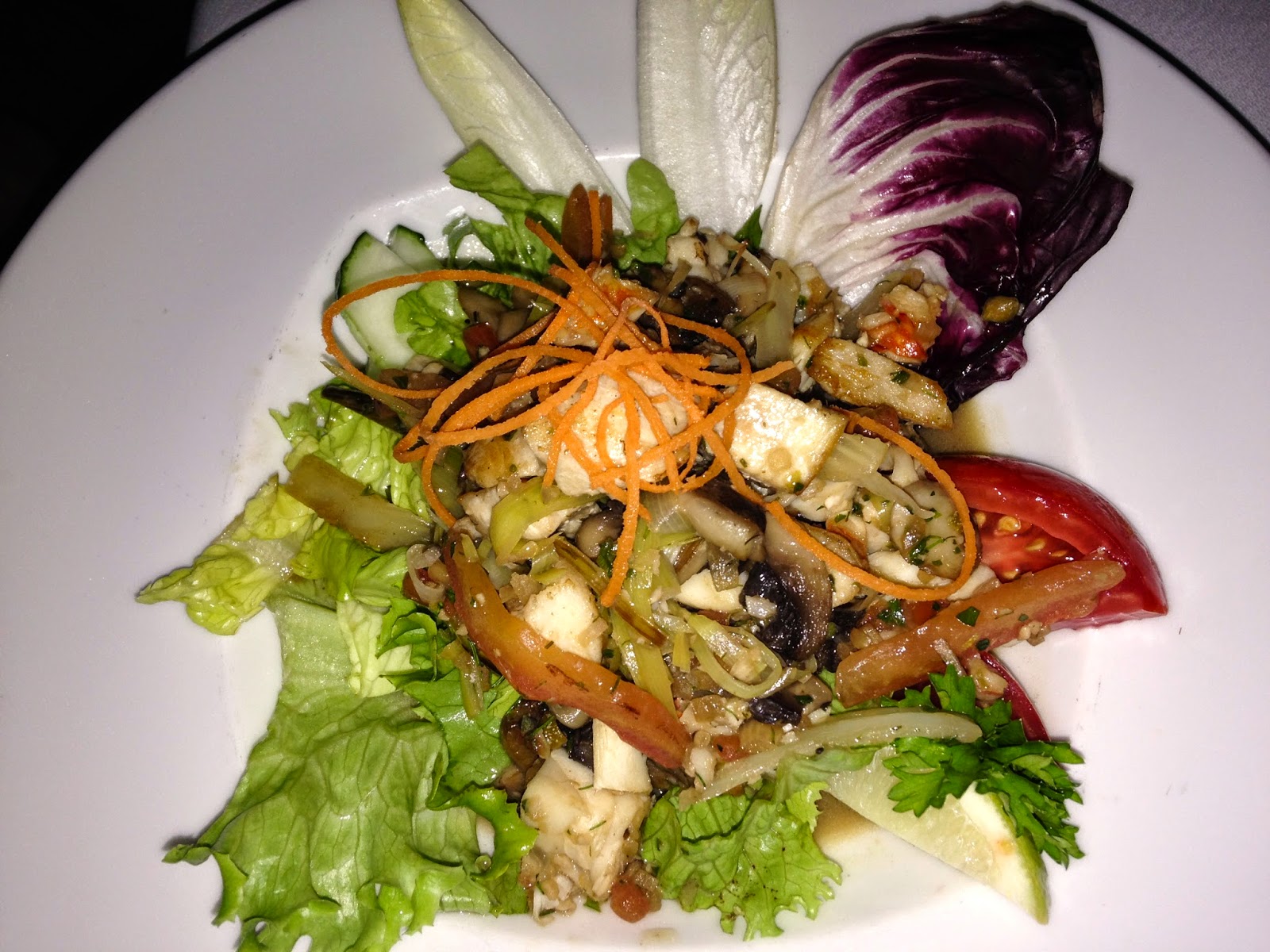 We had another round of drinks and then decided to head home without dessert. We remembered to use our Anguilla Card this time (we forgot on our first night that Mango's honors it!) and thus saved 10%.  Once back home, we had shared a big bowl of ice cream and tried to watch television, but we couldn't find anything that didn't look, well, stupid. So it was off to bed with a book, which turned out to be much more satisfying.
Posted by As the Crowe Flies and Reads at 10:11 AM