Best of 2015: A month late and many dollars short

Let’s pretend like I’ve been here all along, shall we?  That I didn’t take a nine month hiatus from my online life and such.  I shall tell myself this over and over, as obviously it’s much easier to write a blog post when one is already in the habit of doing so, rather than trying to overcome the tremendous inertia it would take to come back from an absence of that length.

Since it’s also easier to create a book list than to write a book review, I’m a-gonna start with counting down the best books I read in 2015.  Usually this is a pretty daunting task, choosing my favorite 10-15 books out of the 125+ books I read in any given year, but 2015 was special in that I essentially stopped reading during those same months that I wasn’t blogging.  I’m still clawing my way out of that bookless  pit that I fell into, but things are definitely getting better.

I only read 53 books in 2015, but forty of those books were read in the first four months of the year. Since one thing I learned last year was the importance of being kind to oneself, I’m trying very hard not to berate myself for those shocking numbers.  After all, who could have predicted that being unable to read would be the collateral damage of my separation? 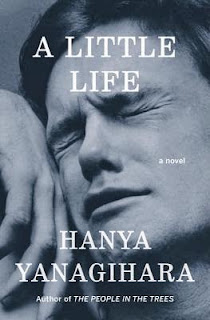 The best book that was published in 2015 that I read was A Little Life by Hanya Yanagihara; despite having finished it at the end of 2014, it has earned a spot on this list.  My god, that book had everything in it that a reader like me could want, not least of which was a deep sense of catharsis from reading the last third of it.  I wrote a rather gush-y post about it here, if you’d care to check it out.

Everything else that I list is in chronological order from when I read it:

2. God Help the Child by Toni Morrison. Here’s what I said about it back in February 2015: I liked this one significantly more than her last 2-3 novels, and it might even be my second favorite of her books, after The Bluest Eye.  This one is spare, either all plot or all character, with very few descriptors in between.  It's almost like she said, "Fuck it.  I'm 83 and I don't have time for any filler.”

3. Leaving Before the Rains Come by Alexandra Fuller.  Little did I know when I read this book about the dissolution of a marriage that I would be relating to it on a much more personal level before the year was out.  Fuller is an excellent writer and memoirist. My full review is here.

4. The Wonder Garden by Lauren Acampora is a wonderfully dark collection of short stories featuring the underbelly of suburbia. I had the pleasure of meeting the author for dinner at NEIBA in the fall of 2015 and had the most delightful time sharing stories with her.  My full review is here.

5. The Church of Marvels by Leslie Parry.  I couldn’t believe that this was a debut novel -- well written and well constructed, interweaving multiple characters’ narratives into one brilliant story overall. Atmospheric, engaging, ends beautifully.  Not sure you can ask for more than that in one novel.  Here’s a partial review, such as it is.

6. Winnie-the-Pooh by A. A. Milne.  I’m a little embarrassed that I’d never read this book as a child, which is quite a shame since it’s as delightful a book for young readers as I’ve ever encountered.  Even so, it took me weeks to read it last year.  I have no review for it, but probably most of you already know it better than I do anyway!

7. Fortune Smiles by Adam Johnson. This collection of short stories, a follow up to his Pulitzer Prize-winning novel, The Orphan Master’s Son, is strong.  Strong, dark, and largely tragic.  I was a little surprised when it won the National Book Award recently, but not displeased.

8. The Tsar of Love and Techno by Anthony Marra.  Another short story collection that follows up a better-known and prize winning novel (in this case, A Constellation of Vital Phenomena). This loosely-related collection of stories, however, forms a novel in the same way that Olive Kitteridge did.  I dig Marra’s writing -- his lyricism and sense of metaphor in particular -- and he’s overall one of the most genuine, kind, and engaging authors I’ve ever had the pleasure to have met. 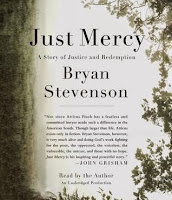 9. Just Mercy by Bryan Stevenson.  This was technically an audio book that I listened to, and it’s the only non-fiction to make my Top Ten list this year.  Holy crap, but this book was good, and it should basically be required reading for everybody who has ever felt outrage over the treatment of the disenfranchised in this country.  Or better yet, for everybody who has not felt that outrage.  So basically required reading for everybody. The audio was fine, but I think it might have been better served by a professional reader.

10. Scary Old Sex by Arlene Heyman. This is also a collection of short stories, which won’t be published until March 8, 2016. You know, I’m a little surprised that short stories comprise 40% of my Top Ten list.  But then again, considering the nature of short stories and being able to pick them up and put them down again at shorter intervals might explain a lot.  These stories are not interrelated per se, but they are linked thematically by love, sex, marriage, aging, and the fragility of our mortal coil.

So that’s that, then.  I’m a little surprised at my list, but those are all of the books I read in 2015 that I gave a 4- or 5-star rating on Goodreads.  My reading does seem to be picking up a bit now in 2016.  I’m able to finish a book in less than two weeks usually, and while I’m not sure if I’ll ever be able to resume my average pace of 2.5 books per week, I’ll be quite grateful if I can get back to one book per week.  We’ll just have to see.

But what about you, Gentle Reader?  What books excited you most in 2015?  And are there books coming up this year you’re particularly keen on?
Posted by As the Crowe Flies and Reads at 10:52 PM 17 comments: