Wow, I’m off to a blazing start for the year, aren’t I?  Two blog posts in four months?  Only the most dedicated of bloggers would be able to top that.  As my friend Alley says, it’s so much easier not to write a blog post than to write one, and I’ve apparently been exploring the exciting world of not writing blog posts for quite some time.  I’ll give this travel post a shot to see if I can overcome the inertia of not writing.

Last week, I had three and a half days off from work, plus my regular weekend, and my beau and I had planned to visit Washington, DC, for our first vacation together. Funds were a little tight, so we selected DC as a great place because most of the fun activities available there are free. Sadly, we both had unexpected expenses in March that made canceling the trip the wiser thing to do. Yay for adulting and all of that.

So we canceled DC and decided to stay home.  My roommate was going to be away for the entire week traveling for work, so we’d still have lots of privacy, and on the plus side, we ended up eating bacon every day for the win. For a little splurge, we decided to head up to Brattleboro, VT, for one night.  We originally selected a private apartment via AirBnB, but it wasn’t available the night we wanted to go, so we rented a room in somebody’s apartment instead, with a shared bathroom.  Here’s the pretty, light-filled room we selected:

The apartment was within walking distance of downtown, which was our primary criterion, and after dropping off our bags, we headed out to explore.  A little online research had revealed a few things we wanted to do whilst in the area, all of which pertained to eating and drinking. I’d worked out a little time table to make sure we could take it all in. 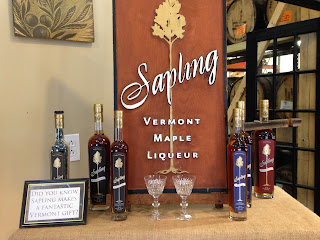 Our first stop was Saxtons River Distillery, maker and purveyor of fine maple-infused spirits. They offer free tastings of all of their beverages, plus tastings of the maple bitters that they sell, but do not make. There was maple bourbon, maple rye, maple liqueur made with neutral spirits, a coffee liqueur, and then their super-special aged maple one. I’m not a big maple fan, so I was quite taken by surprise with how much I enjoyed them all. I’m also not a big rye fan, so I was even more surprised that I liked the rye better than the bourbon. We bought a few bottles, took some photos, and thanked the young man for his time. 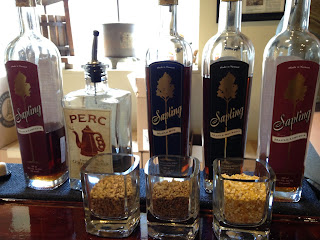 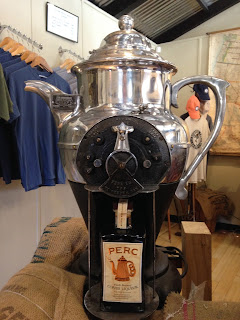 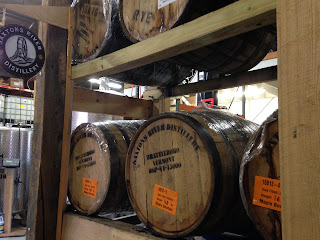 Next up was a stop at the Grafton Village Cheese Company.  They offer lots of complimentary cheese tastings -- perhaps twenty? -- and also have various jams, sauces, and spreads available for tasting, too. 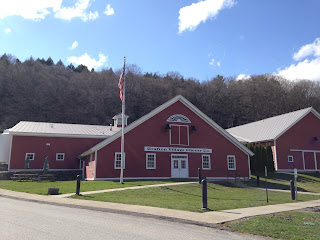 We poked around, we sampled everything. Well, I sampled everything except the Bernie Sanders “Feel the Bern” Habañero Mango Jam, because I’m a wimp when it comes to spicy things. The nice cheesemonger behind the counter struck up a conversation with us for a few minutes and then she offered to let us sample one of the super-duper-fancy gourmet cheeses that sell for roughly $50/pound -- the one she opened up for us was a medium cheddar marbled with black truffles.  Very yummy! 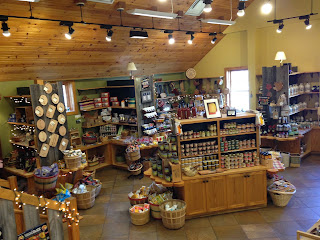 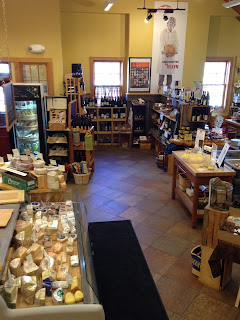 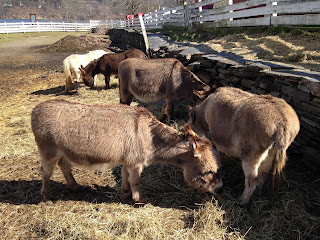 We made our selections, paused at the observation window to see the cheese making in the back room, snapped a few photos, including some of the burros grazing in a paddock outside, and headed back to our room. Where I promptly fell on the bed for a nap.  I’d hurt my back the day before at work, and the extra-firm mattress was just the thing.  Apparently what with all of the cheese and booze sampling, I had missed my mid-afternoon ibuprofen replenishment for staying ahead of the pain. 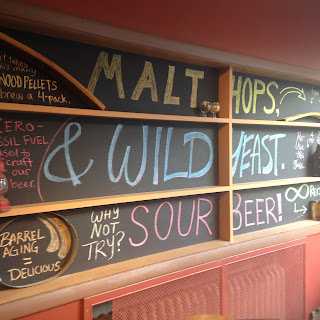 After my refreshing nap, we walked downtown to the Hermit Thrush Brewery, home to many sour beers.  I didn’t know from sour beer a year ago, but my beau has introduced me to its joys. I mostly don’t mind beer, and I like darker beers like stouts, but I may just start a love affair with the sour ones. 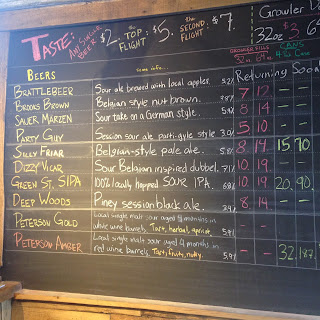 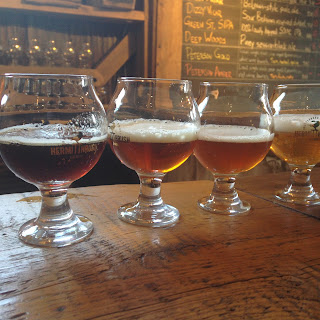 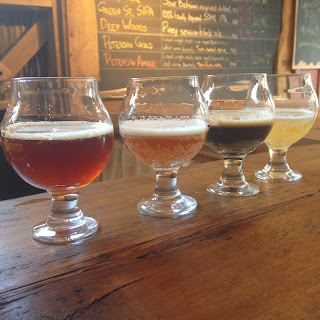 We bought a mini growler of the Green St sour IPA to go and headed out into the world to see what we could find for dinner.  We basically just stopped in everywhere to check out the menus, and we had just agreed that we would do a full lap of the restaurants downtown before committing to a location, when a sandwich board on the sidewalk stopped me in my tracks -- the Fireworks restaurant was hawking a cocktail special featuring passionfruit purée.  In we went. Obviously.

It was the right choice.  I was in the mood for cocktails, and good ones, too, dammit. We planned ahead by walking, and it was vacation, dammit. So you’ll pardon me for forgetting the names of some of the drinks I had.  We had five cocktails between us, and they were all amazing. Carefully-crafted, well-balanced, and all featuring a house-made infusion or flavored syrup, this might be my favorite cocktail menu I’ve ever encountered in New England.

Oh, yes.  There was also food.  We shared the Pizza Bella, which had garlic shrimp, arugula, and shaved cheese on it.  It was amazing.  And the perfect size for sharing when one has no recourse for leftovers.  So what if our food bill was $17 and our bar bill was $47? It was all worth it.  Every bit of it.

We went someplace else for dessert, but it wasn’t memorable, and then we walked back to our room for the night.  Brattleboro, I like you and your walkability. The next morning we poked around in various shops for a couple of hours before hitting the road for home.  Although I had two coworkers check in on the kitties, I was still a little worried about leaving Murray for so long -- Murray of the high vet bills who had almost died a few weeks before.

There’s a small town called Shelburne Falls on the way home from Brattleboro that is picturesque and quaint, and best known for its Bridge of Flowers, so we made the slight detour to check it out.  The day was beautiful and sunny, but unseasonably chilly, and alas, very few flowers were actually in bloom on the eponymous bridge. 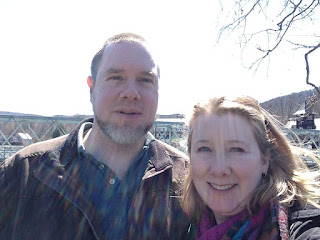 There weren’t many things open that we wanted to explore, so we walked down to the glacier potholes instead.  You can’t get as close to them as you once could, but it was still interesting. 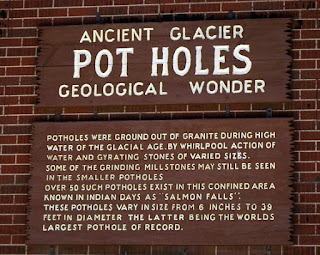 Who knew that grinding and gyrating could create such wonders? 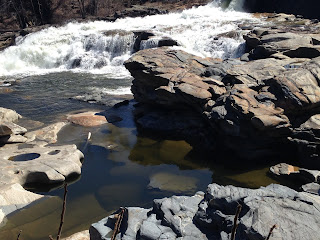 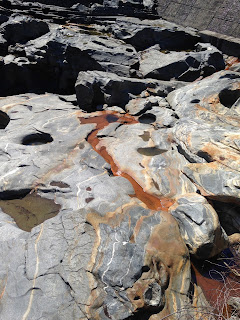 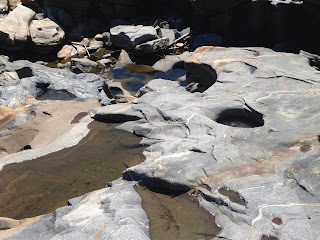 We stayed for awhile, listening to the thunder of the water and meditating on the perfect roundness of the potholes and the forces that created them. But then it was time to head homeward and bid adieu to our one-night [vacation] stand. After all, there was bacon in our near future and we didn’t want to miss a bite of it. 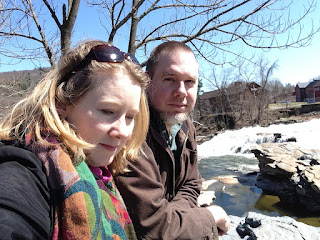