Caitlin Moran: The Ending. Or is it? 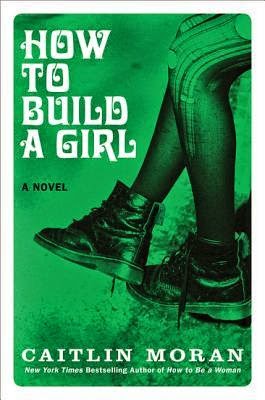 So we've come to the end of this book, and this readalong.  Maybe.  The original idea was to post about the last section and do a wrap up all in one day, but part of me is feeling a little bereft that we're at the end.  Thus, I propose that those of us who want to continue our conversation about Johanna and her family and her awakenings can do so next week, right here.  I'll put up another Linky and we can go from there.

So...Section Three.  When we left off last week, Johanna had recently discovered that rather than being critical and smart and pointed in her music reviews, she was just being a dick.  Now she's worried that she's been a dick to John Kite, and maybe THAT is why he hasn't been pursuing her, even though she's been writing to him about her swashfuckling sexual adventures (I am so glad to live in a world where swashfuckling is a word).  And we can all rest easy that John Kite is an upright kind of fella, not some pedo, and that maybe, just maybe, they will get together when the time is right.

In the meantime, though, two other major things are happening. One of which is Johanna comes to the realization that her relationship with Tony Rich is abusive and then leaves him.  I wonder how metaphorically we're supposed to take this. That is, Johanna finally gets that Tony's sexual sadism isn't doing anything for her and that not only does he hurt her during sex, he treats her pretty shabbily, too.

While I wish her telling him off would have been as mean as her music reviews, I love her self-realization afterwards: "I feel excitingly...free. Things were going to happen to me last night that I did not like -- and I stopped them. I have never prevented my own doom before! I have never stood in the path of certain unhappiness and told myself -- lovingly, like a mother to myself -- No! This unhappiness will not suit you! Turn around and go another way!"

The other major reveal is we learn why the family's benefits were cut 11%: Johanna left school full time.  I have to admit, I didn't see that coming at all, and I was both surprised and impressed by the way her parents handled it.  And this: "I'm learning a whole new thing: that sometimes love isn't observable or noisy or tangible. That sometimes love is anonymous. Sometimes love is silent. Sometimes love just stands there while you're calling it a cunt, biting its tongue and waiting."

A few bullet points for other things I responded to this week:

I still like the song, but I can't separate my nostalgia for it from any actual merit it might have.  I especially like the last bit, where the singer invites people who feel a breath of sadness, who are touched by madness, or who find themselves ridiculous to sit down next to [me]. Here, go listen it to it for yourself:

Overall, I've had so much more fun with this book than I thought I would. I mean, I expected it to be fun, but I mostly thought it would be of the frivolous sort.  This book is far more substantive than a casual glance would indicate, chock full of wry social commentary, class issues, and above all, feminism. Beneath the humorous, and even raunchy, veneer, the heart of Caitlin Moran's first novel beats time with the age of feminism.

Part of the fun has been the readalong aspect, so I'd like to thank all of you who have been participating.  Some of you are old internet friends, but the rest of you are new ones and I'm glad that we could all come together each week to hang out there.  I'll miss this! It's been a tough week and I'm otherwise gif-less, but I couldn't end the readalong without letting you know how I feel about y'all:

NB: We wouldn't be gathering here without the help of Harper Collins, the American publisher of How to Build a Girl, who has provided the galley in physical or e-galley format to all of us participating.  I'd also like to give a shout out to Caitlin Moran herself, for writing such an entertaining and provocative novel.

Posted by As the Crowe Flies and Reads at 1:07 AM