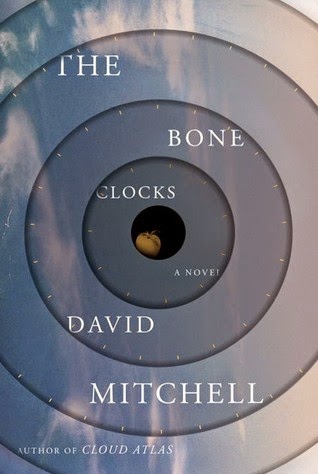 I have been putting off writing my review of David Mitchell's new novel, The Bone Clocks for nearly three months, largely because I feel completely inadequate to write a review of such a novel.  I'm not one of those readers who has been a Mitchell Completist or general devotee; in fact, before this novel, the only book I've read with his name attached is The Reason I Jump, which he translated but did not write. In other words, aside from knowing that a new book by David Mitchell qualifies as a world publishing event, I did not know precisely what to expect.

What I got was a soaring work of triumph that beautifully blends literary fiction with experimental and/or genre fiction. I can't pretend that I fully understood this book, and I was aware of that fact even as I was marveling over some of the prose and puzzling out the implications of time as Mitchell presents it.

Any attempt to summarize the plot of this book will necessarily fail -- even the short publisher promotional summary is a full three paragraphs and doesn't convey all that much other than the various locales of the novel.  But reviewing a book without any attempt at synopsizing is foolish, so here I go: The Bone Clocks hangs heavily on the narrative of a woman named Holly Sykes, one of the most remarkable characters I've ever had the privilege of meeting.  Her sections bookend the novel in a very nearly cradle-to-grave manner, beginning in the 1980s as a misunderstood teenager (surely there's no other kind?) and ending in a dystopian future setting when she is a grandmother fretting over the future of the children in her life. In the other sections that comprise the bulk of the novel, Holly is present either as a secondary character or merely in the reader's memory, but she's always there, lingering at the periphery of the reader's, and occasionally the other characters' consciousness.

So far, so good. But here's where the summary gets complicated.  In her youth, Holly has an affinity for the paranormal, and certain things happen in the first section that will have major reverberations in the later sections.  There are politicians and doctors and novelists and war correspondents and trustafarian rich kids, all living in more or less our own reality. There are also beings called Anchorites and Atemporals, locked in centuries-long psychic warfare. Along the way, Mitchell plays with the  notions of time, not just in a nonlinear or circulinear way, but in a... I can't even keep going, because trying to summarize is just too preposterous.

I think it simply must suffice to say that The Bone Clocks (incidentally, a rather poetic reference that comes very near the end of the novel) is a work of staggering imagination and craft. It's not perfect, and there are some sections that strained my credulity even as I was suspending my readerly disbelief. But that's almost beside the point in the face of what David Mitchell has accomplished.

I no longer have access to my ARC, so I cannot quote any passages from the book, so I'll just conclude with a quotation from the review of one of my Goodreads friends, New Englander, because it's something that I wish I had written, "Overall, then, a fantasy that tries and then comforts your patience. The plot will reward, you just have to be willing to take a long and winding road and enjoy the journey by stopping to smell any paranormal roses along the way. "

(I have to confess that David Mitchell's use of the golden apple (also pictured on the cover) was most poetic.  I only know Yeats' poem, The Song of Wandering Angus, from taking a Southern lit course in college and reading the source of Eudora Welty's title, The Golden Apples:  "And pluck till time and times are done the silver apples of the moon, the golden apples of the sun." That line means a lot more now after reading Mitchell's book.)
Posted by As the Crowe Flies and Reads at 12:56 PM