The Heads of the Colored People by Nafissa Thompson-Spires 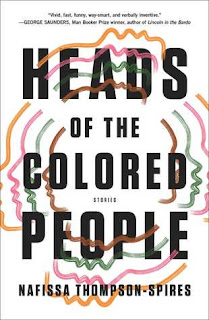 Work has been keeping my very busy these last couple of weeks.  I’m grappling with questions about my future and my job, all while trying to stay on top of myriad deadlines.  In the midst of all of that, my book reviewing and blogging have fallen behind a little, so to make myself feel a bit better, here’s a mini review of a new collection of short stories.

Heads of the Colored People is a debut that simply blew me away, particularly the titular story, which is a true powerhouse (with a nod to Eudora Welty). Subtitled “Four Fancy Sketches, Two Chalk Outlines, and No Apology,” it plays with the fourth wall, turns readerly expectations upside down, makes you laugh, and then utterly guts you. I mean, seriously sucker punches you.

I picked up this collection of stories because of the provocative title and stayed for the sheer writerly talent contained within.  Thompson-Spires’ narrative voice is so distinct, so self-assured, that it defies belief that this is her first book.  Edgy but always accessible, she’s a new literary talent to be reckoned with. Put this book on the shelf with Junot Diaz and Roxane Gay, where it will be in good company. Seriously. Just buy this book.

Heads of the Colored People went on sale in the US yesterday, published by Atria, a division of Simon & Schuster.  I read an advance reading copy provided at my request by the publisher. My coworker and I liked this book so much that we made it a selection for my store’s signed First Editions Club, and I am very much looking forward to meeting Nafissa Thompson-Spires in person at the end of this month.
Posted by As the Crowe Flies and Reads at 10:08 AM 3 comments:


March was full of so many good books, two of which I actually got around to reviewing already. Out of the nine books, two were nonfiction, one was a re-read, one was an audio, two were graphic novels, and three were by authors of color. I really liked or loved each of them, too, so all the winning for me!

1. Illegal by Eoin Colfer and Andrew Donkin, illustrated by Giovanni Rigano. This book was a useful reminder that I should read more graphic novels.  This one follows a young boy named Ebo in his desperate quest to leave Ghana, cross the Sahara, and make his way to Europe to keep his family together and make a better life. It’s an incredible read. Review here.

2. The Ensemble by Aja Gabel. This debut novel follows a quartet of classical musicians from their years in graduate school through adulthood, children, relationships, etc.  It’s a very good book, and one of the few books I can think of that explores the importance of work relationships and non-romantic intimacies when people’s livelihoods are intertwined. The music writing is pretty incredible, to boot.

3. Things That Make White People Uncomfortable by Michael Bennett. This is one of the two nonfiction books I read this month and the other review I happened to have written.  I had no idea who Michael Bennett was when I picked this book up to read, but it turns out that he’s a professional football player who is also an activist, and he has some pretty terrific things to say.

4. Today Will Be Different by Maria Semple.  I can’t tell you how long it’s been since I read a book that was already published, but I was in a bit of a book slump and not interested in anything I’d brought home from work to read, so I grabbed this one from the shelf.  I liked it.  It has the same wry, bordering on dark, humor that marked Where’d You Go, Bernadette, and the same kind of brilliant and neurotic protagonist, too.

5. America for Beginners by Leah Franqui.  Another debut novel, and this was the right book at the right time for me.  Featuring the widow Mrs. Sengupta from Kolkata takes a trip to the US, where she is accompanied by Ronnie Munshi, her tour guide guide, and Rebecca, her companion (for modesty’s sake). These three unlikely pilgrims make their way across the US, but Mrs. Sengupta has a hidden agenda: to find and meet the partner of her gay son, whom her husband disowned. I love road trip stories, and this one had so many rewarding moments.

6. The Wrong Heaven by Amy Bonnaffons.  This is another debut, this time a story collection that feels like it’s the love child between Kevin Wilson and Kelly Link.  Each story is dark, leading either to a dark & twisted or dark & titillating conclusion. Lee Boudreaux edited this one, and she’s my favorite editor in the industry.  I will blindly read anything she had a hand in, and a ridiculously high percentage of the time I will come away better for having encountered her books.

7. Sisters by Raina Telgemeier. I can’t remember the last time I read two graphic novels in one month, but the one arrived damaged at my bookstore -- too damaged to sell -- so I was able to take it home to read for free.  So much fun, so much truth about sibling and family dynamics! I had read and loved Telgemeier’s Drama and I’m not sure why I never got around to this one until now.  Good stuff here.

9. The Secrets Between Us by Thrity Umrigar.  I had the great pleasure of having dinner with Thrity and a couple dozen booksellers last week, courtesy of Harper Collins.  This is the sequel, of sorts, to The Space Between Us, which I had read years ago and enjoyed, but this book, after getting off to a somewhat slow start, became a book that I really loved. The politics of gender, class, and sexuality converge in this heartfelt tale of women and the hardships and indignities they’ve had to survive in 20th and 21st century India.

And just because I happened to have found old photos, here are pictures of Parnassus, the beautiful bookstore in Nashville that Ann Patchett co-owns with the marvelous Karen Hayes.  Wouldn’t it be great to revisit your childhood and find a place for kids that is as magical as the children’s space at this bookstore, complete with a child-sized entrance that requires passing through the pillars of the Parthenon? 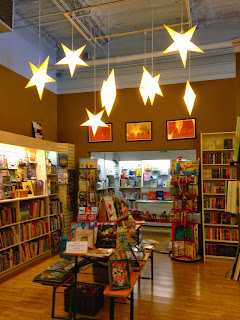 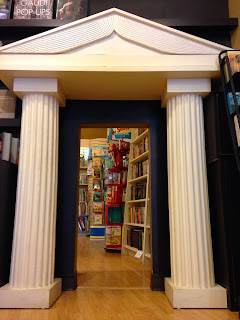 Posted by As the Crowe Flies and Reads at 4:48 AM 3 comments: