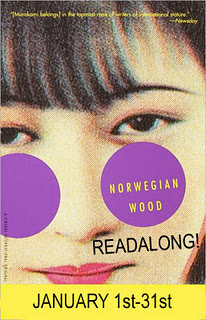 Well, sometimes you just get what you ask for.  I thought I wanted more Midori, then it was all Midori, all the time, and then she turns into this sulking shell of a girl.  But then, I guess, she turns out okay, despite her falling in love with Toru.  At least she's direct, and a little directness goes a long way with this crowd.

Let's see...Naoko is still dreary and fucked-up, and whoops--she commits suicide, too, to nobody's surprise. Too bad, so sad. Moving on.

Reiko.  Alas, she fell under Toru's spell, too.  I mean, I can totally see now why chicks dig him--he likes to iron clothing and get rid of wrinkles and everything, and who wouldn't swoon over that? I reckon she's off to off herself.

Toru. Mr "I've just declared my love for Midori, so I guess the first thing I better do after getting back to civilization is indulge in a pity fuck right now." Helluva guy, that Toru.

So, I suppose it should come as no surprise that I didn't care much for this book.  Murakami's men are either boors or bores, and the women are all either dull and suicidal, or far too bright & incandescent to be with Murakami men. Still, by the time I came to the end of this book there was a certain satisfaction in it, apart from the relief of finally getting to the end.  I'm completely puzzled why this is the book that rocketed Murakami to both national and international stardom, though--how this book can be a cultural touchstone is way beyond me.

I bought 1Q84 as soon as it released in the US, but I don't think I'm going to be picking it up any time soon.  I'm going to need a Murakami palate cleanser before starting in on that doorstop of a book. But still, y'all, how much fun was it to do a read-a-long with a modern classic that most of us didn't really like so much?  Totes fun, that's how much!  Yay, Alice, for hosting.

Posted by As the Crowe Flies and Reads at 9:21 AM