I have a confession to make.  Up until now, I have never read The Great Gatsby, but the reasons I just read it are fairly roundabout.  My husband read it a couple of months ago for the first time, and last month I commented on a Top Ten Tuesday post that it would be a book that I'd like to receive for Christmas.  In that same TTT post, I lamented the fact that nobody gives me books any longer, now that I work as an independent bookseller.  My mom in turn read that post and determined to make me eat my words, so she gifted me with her personal copy of Gatsby this past weekend when I was visiting her in Wisconsin over the New Year.

I remember watching the Robert-Redford-as-Gatsby film adaptation more than 20 years ago with my mom, who is positively gaga for Redford, but I'm afraid that my mind retained only a couple of images: the car accident scene and the final scene in the swimming pool.  I came to the book with a similar tabula rasa in terms of the story, but I'm not sure whether it's to my family or the literary culture of the places I've worked that I owe the fact that all of the names and places were already familiar to me by the time I picked up the book.

Now I'm sitting in the Detroit airport, moments after turning the last page of Fitzgerald's book.  I'm not sure what to say about this book, other than I know I have absolutely nothing new to bring to the conversation.  There are some really, really lovely turns of phrase throughout, and I suppose I see why it has become an American classic, but for me it falls mostly under the heading of Pretty Good rather than Great.  I like the book for its tightness (I can think of a few writers who should take that lesson to heart), and I especially admire the way Fitzgerald allows the reader to make those mental mini-leaps during the lapses in narration instead of filling in every single blank the way modern writers need to do.  But I can't help feeling that I'm missing out on a lot of subtext in this book, both cultural and historical, and it makes me wish I had read this book in an academic setting so that I might have a fuller appreciation of it.

What about you?  Have you read Gatsby?  What is the one thing you feel I should take away from this book?  If you're an avid Fitzgerald fan, what should come next for me? 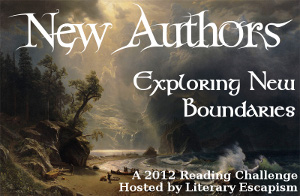 Believe it or not, this book qualifies for the New Authors challenge hosted by Literary Escapism.  I have never read F. Scott Fitzgerald before.  One down, 39 more to go for the year.
Posted by As the Crowe Flies and Reads at 12:57 AM