Harry Potter and the Deathly Hallows: Part the First, In Which I Go Crazy With Wand Innuendos 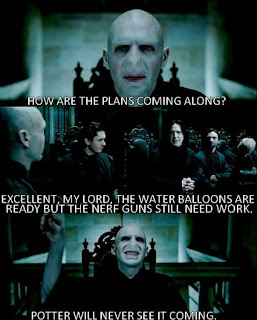 Ho, boy.  It's harder than I thought it would be to coalesce my thoughts this week.  I think Deathly Hallows is a pretty good book but a pretty poor wrap-up to the series, but I'm not sure that anything could have wrapped up the series brilliantly for me--my expectations were always going to be too high. The whole time I was reading this week, I kept thinking, oh, not much longer.  Or, wow, we won't see ______ again.  I'm feeling pretty melancholy and the worst hasn't even happened yet.  But onwards and upwards.  Thanks once again to Alice for hosting the readalong, without which I'm sure I'd have got lots more reading done but had much less fun.

I think this is the first book where JKR used any epitaphs.  I am not a fan of that.  I do love the dedication, though. And it's curious to me that it looks so serpentine. Is it a subtle nod to Slytherin? Or an even subtler nod to the Mouse's Tale/Tail from Alice's Adventures in Wonderland? I'd really like to know.

Chapter One: Snape is literally and figuratively Voldemort's right-hand man. Love that. But then we hear about Pius Thicknesse and methinks that JKR has grown a tad heavy-handed with her Name Symbolism once more.

She makes up for it when Voldemort and Malfoy compare the length of their wands, though.  Makes Lucius's "involuntary movement" all the more intriguing, no? And then "some of the throng sniggered." They certainly did, Jo. 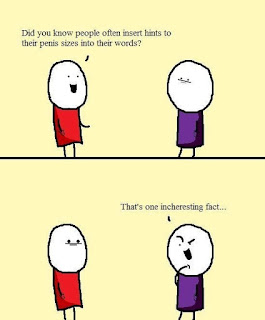 Not my original idea here, but I remember reading a pretty in-depth review of DH after it came out, saying that in the first chapter, Rowling really ratchets up the fear and tension by killing off a character so beloved that...we never knew her name before now. When I first read the scene of Charity Burbage, I was pretty subdued, but every subsequent time I've read it, I can only think of what that critic said and it makes me giggle.

Chapter Two: In Memoriam.  Maybe this chapter would have been better named In FoDump.

Chapter Three: I got nothin'. I really had wanted a better reconciliation of Harry and Dudley, and there were glimmers of it, but I think there's an enormous story there just waiting for JKR to tell it.

Chapter Four: I like the action-y bits in this chapter, but it all kind of leaves me wondering why they couldn't just, oh, I dunno,  drive Harry out of harm's way instead of creating this ridiculously complicated diversion. They could have put lots of Shield Charms on the car. Dumbledore wanted Snape to still be useful to Voldemort? Dude, Snape just killed you to be useful to Voldemort. No need to get Moody killed in the process. Besides that, why not Disillusion themselves when leaving Privet Drive?  They did that when arriving there and it seemed to work just fine.

Also, the same critic who wrote that about Charity Burbage brought it to my attention that at one point there are six naked Harry Potters in the room, waiting for clothing. Just sayin'.

I was upset when Hedwig died.  She dies a better death in the movie than in the book, though.

Chapter Five: I love the twins here. Getting an ear cursed off and still making bad jokes about it. The twins are really at their best in this book, I think.
I'm sorry, but an editor should have caught this one: "The suddenness and completeness of death was with them like a presence." In other words, it was with them like something that was with them. Yup.

Also, Ron is at his best in this section of the book.  His humor is quick and the tone is just right and he seems to have gotten a grasp on the different ways he can be a friend to Harry vs Hermione.  I chuckle every time I re-read his "always the tone of surprise" line. And his response to Hermione's saying that if she were to drive a sword through him it wouldn't damage his soul: "Which would be a real comfort to me, I'm sure." Oftentimes in previous books Ron's humor has a bitter edge or is at someone else's expense--usually Luna's or Neville's.  But I really like Ron in these first ten chapters, and he's not a character I generally am partial to.

Chapter Seven: Twelve Fail-Safe Way to Charm Witches...about which Ron adds,"It's not all about wandwork." No, indeed, Ron.  No, indeed.  Tee hee.

Chapter Eight: Krum hadn't realized that he'd ever discussed his wand with fans before.  You cheeky Seeker, Krum!

Chapter Nine: In which Hermione is essentially the most awesome character ever but then claims never to have done any memory charms. One chapter after telling us that she's performed complex ones on her parents. Editors should have caught that, too, but like Helen of Troy's face, it's a line that has launched a thousand "ships."  (Most adult Hermione/Snape stories incorporate that line and have Snape perform the memory charm on the Grangers.)

And then Ron struggles with his wand and tells Hermione that it's no wonder he can't get it out.  With Harry standing right there and everything!

Chapter Ten: Oh, thank GOD they finally figure out who the heck RAB was. Now we know was Narcissa didn't get a star name like the other Blacks--it's because her cousin Regulus got two.  Oh, and yeah, they finally remember that locket from OotP that they mysteriously couldn't open.

Oy, my goodness, Kreacher's tale.  So heartbreaking.  One of the most poignant part of the entire series, I think. My eyes are actually welling up right now, just thinking about what I read yesterday. So emotional, so right on the money in terms of Hermione's analysis of house elf motivation and loyalties and what bastards wizards are for treating house elves the way they do.

Heckuva chapter to end on, I say.
Posted by As the Crowe Flies and Reads at 7:20 AM