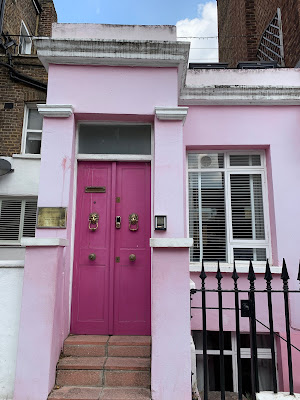 When we booked the Pink House in Notting Hill for our home in London, we had no idea how just how close we would be to the world-famous Portobello market. Turns out, that we were less than two blocks away, but lucky for us Lonsdale Road is closed to vehicular traffic on that end, so we still had a very quiet neighborhood experience! 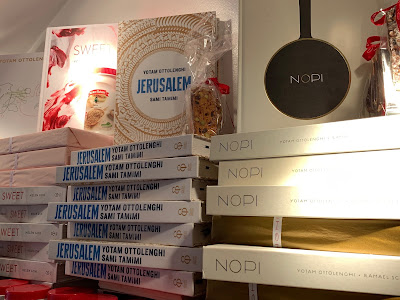 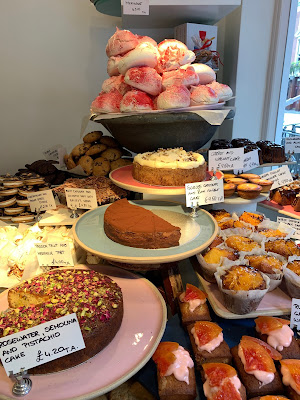 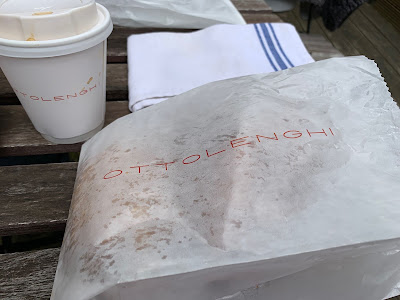 Thus we spent our Saturday morning in the ‘hood. For breakfast, we walked the mere two blocks to the Ottolenghi bakery and brought some incredible pastries back to enjoy the morning from our rooftop terrace. The selection of pastries and goodies was mouth-watering and it was very difficult making our final selections, but I decided to go classic with a croissant and a pain au chocolat while Michael ordered a muffin and something lemon. I think.  I didn’t take notes and he’s not right here for me to confer with, so I could be incorrect. 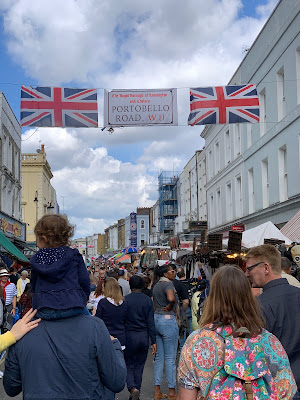 After polishing our breakfast off to the last crumb, we walked over to explore the market. While I was expecting the tchotchkes and the made-in-anywhere-but-England souvenirs, I wasn’t prepared to see the smorgasbord of foods, both prepared and fresh, that were on offer. It was crowded everywhere, as you can see from the photo above, and it was almost overwhelming in terms of stimulating all of the senses at once. 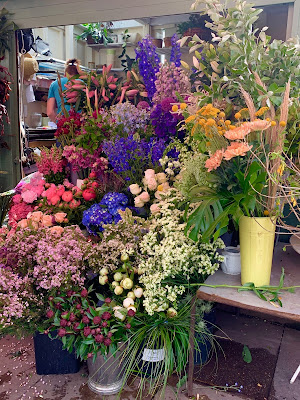 Walking around in the hot sun made us feel thirsty and the scents of all the yummy foods on the air almost made us regret the Ottolenghi, especially when confronted with the fragrant paella in a pan whose diameter had to be damn near my height (!).  After the crowds started to feel like too much, we bought a smoothie served in a fresh pineapple shell to quench our thirst and then moved perpendicular to the market to escape the sea of humanity.

We found a lovely wine shop where the proprietors let us sample an expensive ginger liqueur that we’d seen many times before but didn’t want to drop $45 on a bottle without knowing whether we liked it. (It was delicious and we walked out with some nip-sized gins to share with folks back home.) We walked down lovely street after street and soaked up the very English atmosphere. Michael even located the “whoopsie-daisy” gated park from the Notting Hill movie so naturally we had to take a photo there.  We even discovered the world’s smallest working car and the local public toilets. 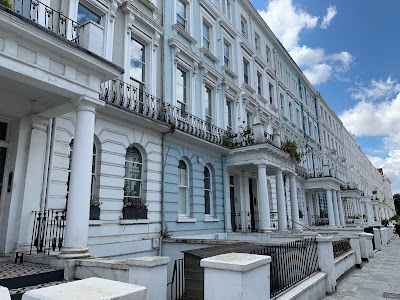 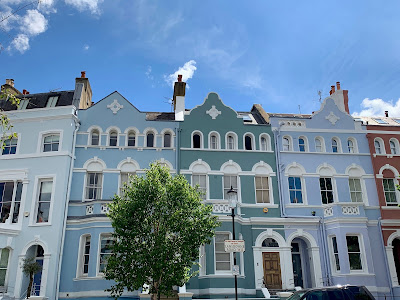 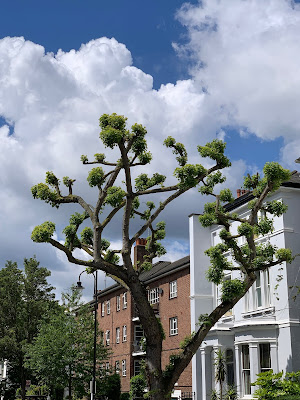 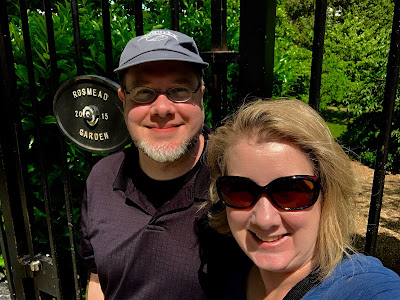 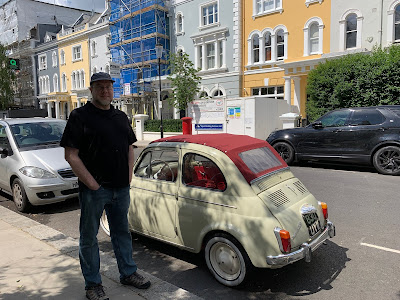 We were enjoying the sunshine and the fresh air, so for the second half of the day we decided to keep going in the same vein. Our London Pass included the zoo, so that’s where we headed.  En route, we made a pitstop at the 221B Baker Street to pick up some presents for Michael’s sister whose one request was for a souvenir that feeds her Sherlock love. From there we took the bus (another form of excellent public transportation that the wonderful city of London has to offer) to the zoo.

I have ambivalent feelings towards zoos in general, even when they’re as nice overall as the London Zoo is. Michael feels similarly conflicted, and I was as surprised as anybody when he said that he was interested in seeing the special spider exhibit. I love the man, but to say he’s not a fan of spiders is to engage in the most careless of understatement.

The zoo itself was spacious and some of the exhibits were lovely, but some seemed so restrictive that they made me deeply sad, like the penguins and the giraffes.  One that we both enjoyed, though, was the butterfly enclosure, and Michael really liked the squirrel monkey exhibit, where he shot an adorable video of a mother & baby. 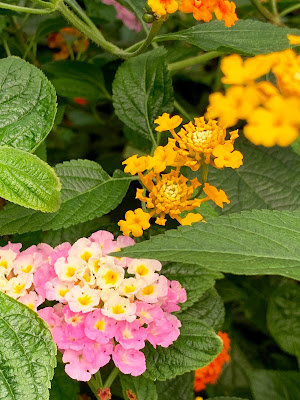 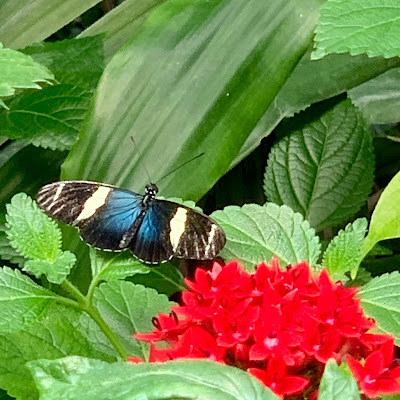 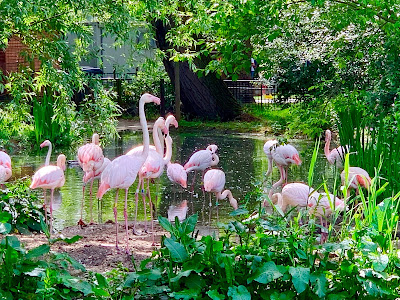 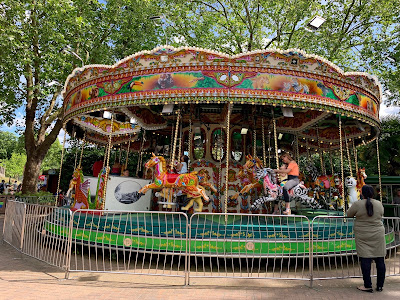 Once my phone told me that we had clocked six miles already that day, we decided to head back and organize something for dinner. One bus ride and one tube ride later, we found ourselves wandering Queensway to figure out where we wanted to eat.  It was my choice this time, so after perusing various menus from every corner of the globe, I chose Alwaha, a Lebanese restaurant, because I love the spice profiles and it’s not something we can easily get at home. 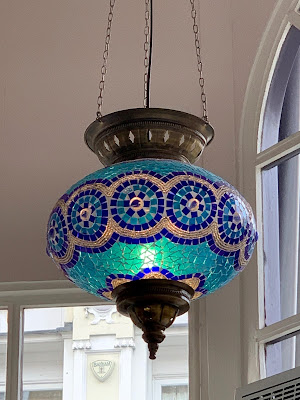 Between the early hour (we’d skipped lunch so we were famished by 5:30) and the fact that it was during Ramadan, we had the entire place to ourselves. We shared a flatbread called Manakeish Bil Jibneh, which was topped with halloumi and spices, I ordered a grilled lamb dish while Michael opted for the grilled prawns with garlic and lemon. One shared glass of arak later, and we were two very happy customers.

The restaurant had a very simple decor and we enjoyed our window seats as we watched the world walk by.  I was completely taken by the beautiful calligraphy by the artist Mouneer al-Shaarani. They were framed without anti-glare glass, so I couldn’t get very good shots of them, but if they had been even remotely within my price range, I would proudly have one of them on my walls right now. 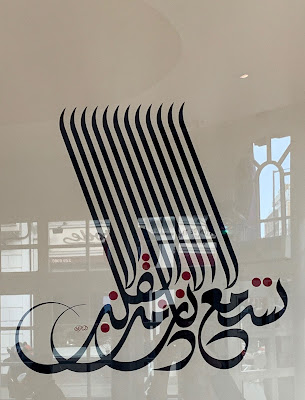 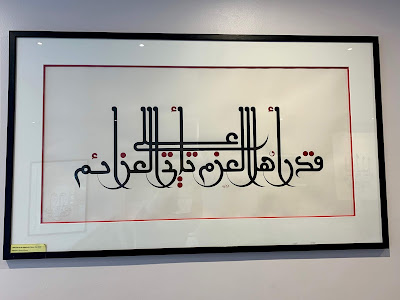 We had a leisurely stroll home, enjoyed a canned gin & tonic on the rooftop terrace (ugh -- why is that even a thing in England?!) and retired to the basement to watch a little Netflix. Which for us meant alternating episodes of Dr. Who and The Crown.  When in Rome, right?

Posted by As the Crowe Flies and Reads at 6:53 PM