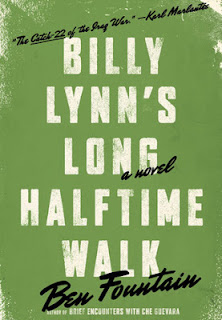 NB: I have slightly modified my original review of this book.  I'm more excited than I can express that this book won the National Book Critics Circle Award, and since I said a long time ago that I thought this book would make the 2012-2103 awards circuit, I guess I'm crowing (get it?) about my own premonitions, too.

Summary from my ARC: Told over the course of a single day*--specifically Thanksgiving Day at Texas Stadium, as the Dallas Cowboys take the field--Billy Lynn's Long Halftime Walk is the story of Bravo Squad, eight survivors of a ferocious firefight with Iraqi insurgents, whose bravery and and valor have made them national heroes. In the final hours of their Pentagon-sponsored "Victory Tour," Bravo's Silver Star-winning hero, nineteen-year-old Billy Lynn, will confront hard truths about love and death, family and friendship, war and politics, duty and honor.

I feel that in addition to being a fresh and edgy book, this may be an important book. So far it's the only one I've read coming out of the Iraq War that subsumes itself in neither action sequences nor in an overwrought family or romantic drama. This one seems to be just as much about the concept of war itself as the politics behind it and how America feels about it. (Though given the book takes place mostly in Texas, especially Dallas, we're not really given a look at the dissenters' side of things.)

Billy Lynn is a fascinating character, a boy thrust into the army (in lieu of doing hard time) after taking a crowbar to his sister's ex-fiance's car for gallant but misguided reasons. He's a thoughtful young man, fully aware that the labels of "hero" mean nothing when one's actions are guided neither by bravery nor fear, but simply reactionary to any given situation, including Bravo's famous firefight with the Iraqi insurgents: one day you're the hero and the next day you're cowering under your humvee and refusing to come out. His thoughts are never far away from his imminent return to Iraq, nor from his buddy, Shroom, who died the day Billy was labeled a hero.

Ben Fountain's novel is the first book coming out of the Iraq War (that I've read, at least) that seems willing to say that war is, more than anything else, a commercial enterprise AND an entertainment enterprise. It's difficult not to draw these parallels about the US's involvement in Iraq with, say, the Dallas Cowboys franchise and the oil-steeped politics of the state in which the book is largely set, or the larger-than-life characters we meet, such as the Dallas Cowboys' owner or the man who spends the book negotiating a movie deal for Bravo. War as commercially motivated enterprise, not a political one, isn't a new concept per se, but it goes a long way in increasing this particular reader's distaste for it, because if it's really not about oil, really not about protecting our interests, and really not about freeing a people from their dictator's rule, then it's really not something I can ever understand, or wish to, for that matter.

Karl Marlantes blurbs this book, and he's not a writer whose opinion I take lightly, especially when it comes to the topic of war. He calls it "the Catch-22 of the Iraq war," and with a comment like that, I'm not sure that there's anything more to add.  I'll just conclude with some passages that resonated with me as I read it:

"So they lost Shroom and Lake, only two a numbers man might say, but given that each Bravo has missed death by a margin of inches, the casualty rate could just as easily be 100 percent. The freaking randomness is what wears on you, the difference between life, death, and the horrible injury sometimes as slight as stooping to tie your bootlace on the way to chow, choosing the third shitter in line instead of the fourth, turning your head to the left instead of the right. Random. How that shit does work on your mind (26-27)."

I love this moment between Billy and his sister Kathryn, re: their father:
" 'He's an asshole,' Kathryn said.
To which Billy: 'You just now figured that out?'
'Shut up. What I mean is he likes being an asshole, he enjoys it. Some people you get the feeling that can't help it? But he works at it. He's what you'd call a proactive asshole' (75)."

Billy with his nephew on leave:
"Based on his highly limited experience with small children, Billy had always regarded the pre-K set as creatures on the level of not-very-interesting pets, thus he was unprepared for the phenomenal variety of his little nephew's play. Whatever came to hand, the kid devised some form of interaction with it. Flowers, pet and sniff. Dirt, dig. Cyclone fence, rattle and climb. Squirrels, harass with feebly launched sticks. 'Why?' he kept asking in his sweetly belling voice, as pure as marbles swirled around a crystal pail. Why? Why? Why? And Bill answeing every question to the best of his ability, as if anything less would disrespect the deep and maybe even divine force that drove his little nephew toward universal knowledge...So is this what they mean by the sanctity of life? A soft groan escaped Billy when he thought about that, the war revealed in this fresh and grusome light. Oh. Ugh. Divine spark, image of God, suffer the little children and all that--there's real power when words attach to actual things. Made him want to sit right down and weep, as powerful as that. He got it, yes he did, and when he came home for good he'd have to meditate on this, but for now it was best to compartmentalize, as they said, or even better not to mentalize at all (82-83)."

The reader never gets the full picture of exactly what happens to earn the Bravo Squad their Victory Tour back home, but here is one of Billy's ruminations on it: "All your soldier life you dream of such a moment and every Joe with a weapon got a piece of it, a perfect storm of massing fire and how those beebs blew apart, hair, teeth, eyes, hands, tender melon heads, exploding soup-stews of shattered chests, sights not to be believed and never forgotten and your mind simply will not leave it alone. Oh my people. Mercy was not a selection, period. Only later did the concept of mercy even occur to Billy, and then only in the context of its absence in that place, a foreclosing of options that reached so far back in history that quite possibly mercy had not been an option there since before all those on the battlefield were born (125)."

Read this book.  Seriously, just read it. If it doesn't make the award circuit come NBA & NBCC time, I will be grievously disappointed with the state of the world.

Posted by As the Crowe Flies and Reads at 8:53 AM