Book Review: If You Could Be Mine by Sara Farizan 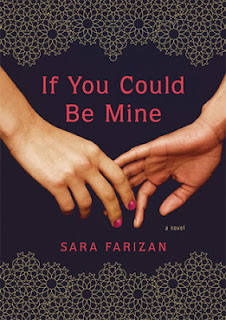 1. Homosexuality is illegal in Iran.
2. Gender reassignment surgery is paid for by the government in Iran.
3. Sahar and Nasrin are two girls who live in Iran.
4. They are also in love with each other.

Leave it to Algonquin, one of my favorite literary presses, to launch their new line of books for younger readers with a novel like If You Could Be Mine by Sara Farizan.  Nothing like a nice, safe, book that is sure to be a crowd pleaser, right?  No, in fact I salute Algonquin for picking a book like this; it's not often that we see so many layers of non-traditional protagonists in one book: Sahar is not white, nor is she is heterosexual, nor of a Judeo-Christian heritage.

Sahar narrates the story from a first person, present tense point of view.  She and Nasrin are in love and have been since they were little girls. They sneak kisses and caresses behind closed doors until the terrible day that Sahar learns that Nasrin's parents have arranged her marriage to a suitable man. Lucky for Sahar, she can confide the burden of her secrets to her cousin Ali, himself a mover & shaker in the underground gay community, and he introduces her to Parveen, who has undergone gender reassignment surgery.

From the moment Sahar meets Parveen, her driving thought is to follow in her footsteps so that she can marry Nasrin, and like many teens, she is completely heedless of the consequences that might follow such an action. All she can think about is Nasrin and not being separated from her; it never crosses her mind that Nasrin might not continue to love her in a man's body, much less than being in love with somebody at the age of 17 isn't a good enough reason to undergo such a medically and psychologically intense process.

Alas, Nasrin never seemed worth it to me. In the same breath that Sahar tells the reader how much she loves Nasrin, she inevitably shares a story that demonstrates how shallow, self-involved, and unconcerned with academic achievements Nasrin is.  I never was able to understand what it was about Nasrin that made Sahar want to forsake her life as she knew it for this other girl, other than her beauty and popularity. Maybe that's the author slyly playing with the idea of teen love, hinting that it can only ever be in the eyes of the beholder? Perhaps, but that would imply a level of sophistication that is otherwise not present in the novel.

There are some interesting minor characters here, including her cousin Ali, but also Nasrin's betrothed (who pops up later in a twist I admit I didn't see coming) and a pair of prostitutes who pose as a mother/daughter team. I would have very much enjoyed seeing more of all of these characters, as I cetainly found them more compelling than Nasrin, and even, occasionally, Sahar. The book is fairly slight--it's a small trim size with generous margins and fewer than 250 pages--so it's a shame that it wasn't fleshed out a little better.

Though I greatly admire the author for tackling difficult issues, I wish she would have developed them more. While these issues are certainly worthy of a teen or adult novel, the handling of said issues feels more like a middle grade novel--lacking the depth and nuance that I have come to expect from finer young adult writers. The first person, present tense (or the present pernicious, as my friend Rob calls it) does not do the book any favors, either.  It is the least sophisticated POV, in my opinion, and a 3rd person narrative could have done wonders for allowing the author to show more from Nasrin's perspective rather than simply to tell the reader certain things, which is how the novel plays out.

Still, I applaud Sara Farizan and Algonquin for producing a novel that is sure to make some young readers think about their world in a new way, including many things they take for granted, and I look forward to more of Farizan's work.  If she reacher her potential and creates novels as substantive as her topics are, she will certainly be a force to be reckoned with.

NB: I read an ARC of the book that I picked up at Winter Institute. Algonquin Young Readers will launch its new line with this YA novel at the end of August of this year.
Posted by As the Crowe Flies and Reads at 8:19 AM