These are the opening lines to Kristin Hannah's new novel, The Nightingale, and they are an excellent two sentence summary of this novel. Hannah, known up until now primarily for her emotional relationship fiction (á la Nicholas Sparks, with perhaps a touch less romance), takes on new ground in this book, published today by St. Martin's Press.

I'm pretty selective in the commercial fiction that I read, but a few months ago I was invited to a pre-publication dinner party with Kristin Hannah, so I promptly picked this book up to read.  Or rather, I picked up an advance audio version of the book to listen to on my commute.  This was a mistake, because while the reader herself was quite good, the audio direction was a little lacking.  Because most of this book takes place in France, the reader was apparently directed to render all of the dialogue with a French accent, despite the fact that the French characters would presumably be speaking French, and therefore a French-accented English is entirely unnecessary.

I stopped listening to the audio and picked up the book to read instead. And man, this is a good story.  Let me be clear here, since I tend to review literary fiction on this blog.  This is not literary fiction, so please do not pick up The Nightingale and expect finely crafted prose.  Frankly, if that's the only thing you're looking for in your novels, you probably should not be reading my blog anyway. With this book, Hannah gets to the emotional heart of war and the human existence, and I'm not sure that you can ask for more than that out of a novel. What's more, she has brought to light for the first time in English the story of various French women and their resistance efforts during World War II, and any time that women's stories become less marginalized is a victory in my book.

Vianne and Isabelle are two sisters with very different sensibilities and priorities. After the Nazis invade France and the Vichy government takes over, they have polar opposite reactions.  Isabelle refuses to play by the new rules, preferring instead to thumb her nose at the new authorities while Vianne keeps her head down and tries to get by, knowing that with her husband fighting at the front, it is up to her to keep food on the table for her daughter, Sophie. Growing apart quickly, and with not much trust or love lost between them, little does the other suspect that each sister will eventually serve the resistance effort in her own way.

I think it's fair to say that when it comes to war stories, I've always been as interested in the stories of those who are left behind as I am in the narratives of those who actively fight at the front, if not more so. Not least because those are often women's stories, stories that become anonymous in the face of time, lacking the active glamorization of war that often accompanies men's stories.  Not to detract from any soldier's experience -- they were harrowing and defined by deprivation, I'm sure -- but Hannah's novel hits on the heart of war at home and the devastating choices one has to learn to make.

Unlike many wartime settings, Hannah leaves room for characters who are neither obviously heroic nor cowardly, but somewhere in between. It demands readers to think about what they would (or would not) do to keep their loved ones safe from harm: Would you feed another starving human if it means your own child will go without food? Would you risk your home as a safe house? Would you turn away from the torture or murder of a neighbor if interfering means capital punishment? How do you raise your child to be a moral person when you cannot set the example you wish to, because to do so is to risk your life or your child's? Above all, how can you possibly atone for the betrayal, albeit inadvertent, of a loved one?

More than anything else, I would say that this book demonstrates that the lines drawn in the sand between what we are and are not capable of doing are ever-shifting under the weight of our complicated humanity. Vianne's and Isabelle's narratives stayed with me for many weeks after I turned the last page, and I'm thankful to Kristin Hannah for giving their stories a place on my shelf.

I never did make it to the author dinner to which I'd been invited; it took place in Boston, about two hours away from me, on a night when the forecast was calling for a 100% chance of freezing rain & snow, and I've regretted not being able to attend ever since. My wonderful sales rep, Bob, managed to attend, however, and procure for me a signed copy in my absence. The book itself is quite beautiful, and it goes on sale in the US today, courtesy of St. Martin's Press. 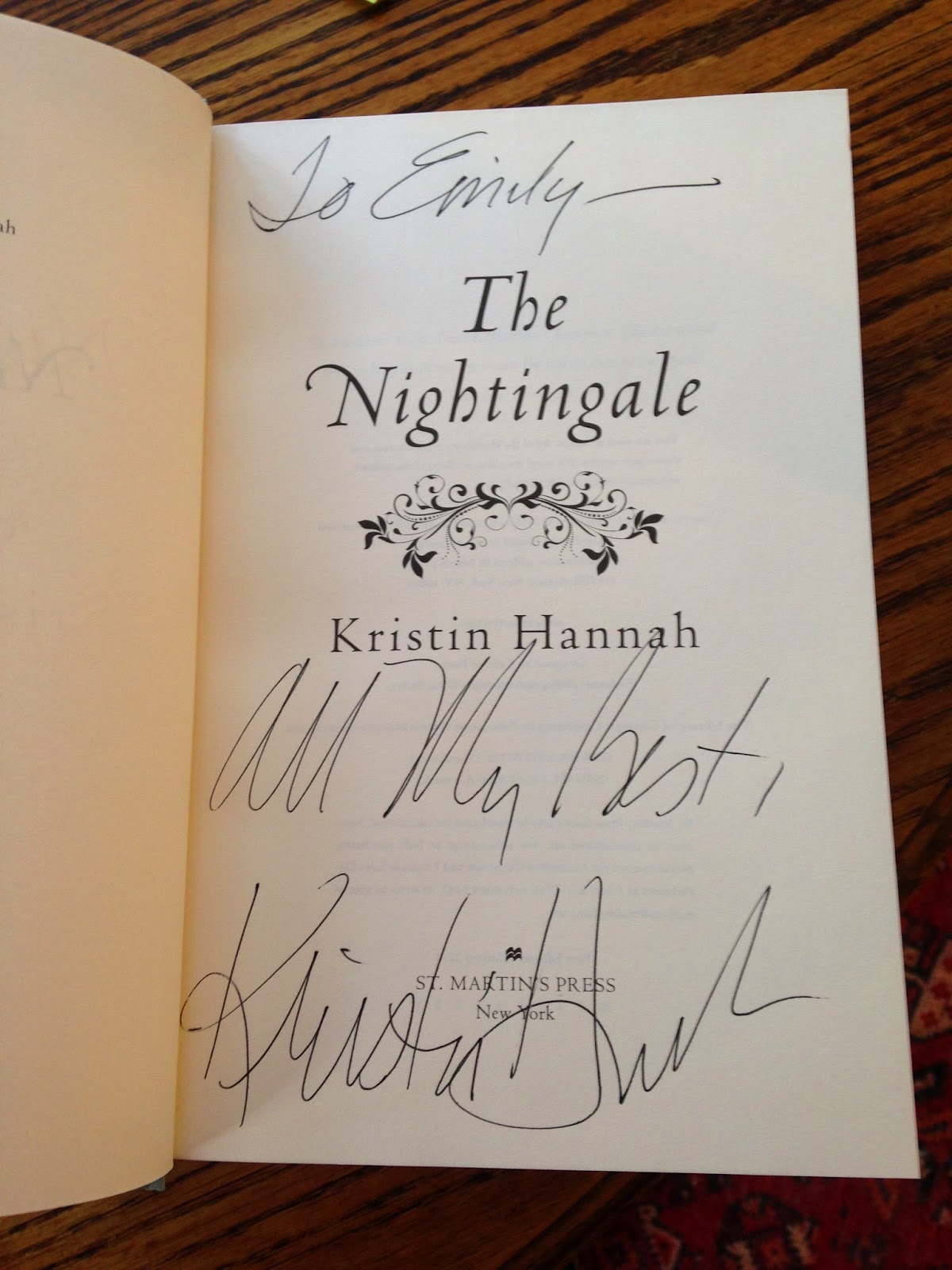 Posted by As the Crowe Flies and Reads at 12:12 AM