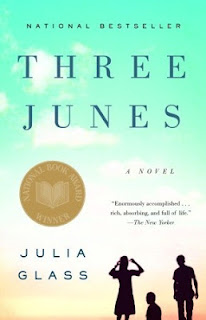 It's amazing to me the difference between reading a book and listening to that book. A good reader can elevate a not-so-great book, while a poor reader can make a great book seem tedious. In this specific case, I'm not sure I can explain the difference between my two experiences with Julia Glass's National Book Award-winning Three Junes, as both the book and the reader are good, but I suspect it's all down to two things: I am a more discerning reader now than I was ten years ago when the book was published, and books resonate more strongly at certain times than others.

My memory may be a bit faulty, but when I first read this book, I apparently never read the jacket copy, as I recall expecting this book to be about multiple women named June.  It's not.  Here's the lowdown, courtesy of the publisher:

In June of 1989 Paul McLeod, a newspaper publisher and recent widower, travels to Greece, where he falls for a young American artist and reflects on the complicated truth about his marriage.

Six years later, again in June, Paul's death draws his three grown sons and their families back to their ancestral home. Fenno, the eldest, a wry, introspective gay man, narrates the events of this unforeseen reunion. Far from his straitlaced expatriate life as a bookseller in Greenwich Village, Fenno is stunned by a series of revelations that threaten his carefully crafted defenses.

Four years farther on, in yet another June, a chance meeting on the Long Island shore brings Fenno together with Fern Olitsky, the artist who once captivated his father. Now pregnant, Fern must weigh her guilt about the past against her wishes for the future and decide what family means to her.


My first impression after listening to the first few tracks of the audio was, "Why the hell is the book being narrated in a Scottish accent?" I'd forgotten that family in question was Scottish, but it still surprised me that the non-dialogue parts were read in the accent.  It took a little getting used to, and on at least one occasion it required listening to certain words or phrases more than once to understand them. To wit: when Paul is visiting Greece, somebody starts talking to him about the "dunkies," or so I thought.  I had no idea what dunkies were, and it was only later in context that I realized that the character was actually talking about donkeys.

I'm ashamed to say that I could not identify how real the narrator's accent is, but he switched back & forth with relative ease between American and Scottish accents (to be honest, they all sounded a little bit faked to me. Faked well, but faked). There were only a few muddied passages where the dialogue switched quickly between characters and the narrative and it was difficult to distinguish who was speaking because the accents became conflated.  John Keating really did a great job of reading this audio, and there were times when it was his storytelling, rather than the story itself, that moved me to tears, although of course sometimes it was both.

My favorite section of the book was Fenno's, though I also really liked the first section that focused on his father, while the last section left me feeling mostly lukewarm. I think it's an interesting choice on any writer's part to impart more knowledge to the reader than to the characters, and I think that's what frustrated me most about the last section. I kept waiting for the other shoe to drop, in terms of what unfolded between Fenno and Fern, but it never happened.

While I remember liking this book when I first read it (I'd given it a 3* rating on Goodreads, for example), I kind of fell in love with the book while listening to it.  There are some seriously gorgeous passages that for whatever reason didn't jump out at me the first time I read it--of course, I can't quote them here because I was driving while listening to the book this time around. This is a mighty fine novel and I'm so glad that I decided to buy it on audio when I saw it at my local record store for $5.  I've since upped my Goodreads rating to 4*, and if I had liked the last section as much as I liked the first two, it might even have earned 5*.

What about you?  Have you had different reactions to the same book when reading it in different formats or when encountering it at different times in your life?
Posted by As the Crowe Flies and Reads at 9:04 AM