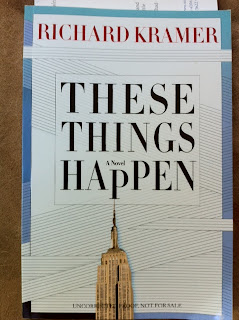 I met Richard Kramer at BEA when I was hanging out in the Unbridled booth (a great indie publisher of good fiction and nonfiction) with my buddy Wallace.  This fellow walks up and Wallace introduces us, but I didn't know the name Richard Kramer, so I made the usual polite how-do-you-do conversation that one makes when meeting people at BookExpo. Only later did I find out that Mr. Kramer has won Emmys and Peabodys for various television shows, like Thirtysomething and My So-Called Life. I picked up a copy and packed it into my suitcase to take home with me and promptly forgot about it.

Fast forward to last week: Late-ish one night I'm sitting in bed, having finished one book and not wanting to walk downstairs to get a new one to read, so I sift through the piles of books on my nightstand. Seeing the Unbridled imprint on the side of this one, I pick this one up.  I don't think the cover looks very promising--it looks like it might be a dull novel about Wall Street, no? In fact, it's immediately engaging and extremely funny and I must have read a full third of the book before falling asleep.

There is no summary on the back of the book, just some blurbs and the writer's previous TV creds. I never watched the tv shows this author wrote for, other than the occasional episode of My So-Called Life, so I didn't know what to expect. What I got is a novel told from multiple points of view, including two 15-year-old boys who are best friends, that explores adolescence, gayness, and what it means to be a parental figure. I'd say that it's a cross between the humor of Joss Whedon and the dialogue of John Green--which makes for good entertainment, if not always entirely realistic characters. I don't think there is a pair of 15-year-old boys living in the US who talk like that, but that doesn't mean I think this is a bad thing.

There's a point in the book, about 3/4 of the way in, where the story starts to dissolve a little for me, but the final chapter redeems a lot. I think that Kramer addresses gayness in a way that is new, at least to me. Yes, he explores the friendship between a gay boy and a straight boy, and yes, the relationship between a straight boy and his gay father & his gay father's partner--these aren't the new territories, but they're done well and convincingly. What seems to me to be new here is the inclusion of liberal, NPR-listening, Democratic-voting, organic food-eating, sophisticated denizens of New York who support gay rights, but discover to their dismay that they're not as accepting as they thought they were when it comes to ways gayness might "rub off" on their impressionable children.

To go into it much more would be spoilerish, but I'll give this brief summary of characters & events: the book opens with Wesley, who ended up being my favorite narrator and character. He's best friends with Theo, who announces to the school during his SBA-president speech that he's gay. Wesley's parents are divorced. His mom is a successful academic who has remarried an older man who is a good step-parent to Wesley and a good person all-around. Wesley's father, now out of the closet, is an important gay rights attorney and activist who is nationally much in demand and so not very present for his son. George is Wesley's father's partner who is an actor-turned-restaurateur who is more attuned to Wesley and his needs than any of the other parental figures, but George always feels unsure what role he is allowed to play as a non-married partner; incidentally he's my second-favorite character and narrator. Not long after Theo's very public coming out, he and Wesley are pretty viciously beaten up in the basement of their very progressive private school where such violence and hatred are supposed to be unknown, and the aftermath of their attack is what frames the second half of the book.

A few passages for you:

Wesley, on the nature of his friendship with Theo: "He saw my point. He always does, as I see his. And his are solid, I feel. I don't know what he thinks of mine, but one can only assume that he finds them solid, as well, because we hang out, text frequently, and dislike the same people (4)."

George, being self-defeating, when his partner has just said that of course someone like him would know what Whitsuntide is and when it's celebrated: "So another small talent I'm embarrassed by, meat thrown to the Shame Buzzards; I know holidays from around the world and the festive foods that go with them, most of which involve almonds (49)."

George, if not exactly a thing of beauty, is definitely a joy forever.  He's full of pop cultural references and he can break out into any Broadway song at a moment's notice.  He feels that Maggie Smith lives inside of him, and he's kind of fabulous, and I want him to be my friend.

And here's Theo, reflecting on his coming out: "Wesley doesn't know if George and his dad are going to get married, even though his dad is always fighting for the right for Gays to do so and helped make it happen in New York. The Gays; that's one thing I'm a little nervous about, being part of a capitalized group all of a sudden, like the Hmong, or Sioux or Abstract Expressionists, whom my mom's writing a book about (104)."

This books is a very quick read--it's a slim tome and the events take place just over the course of a few days. It feels fresh and of our time, and the multiple narrators are carried off very well. In short, this is a very funny book with a few moments of gravitas that was a real treat to read.
Posted by As the Crowe Flies and Reads at 7:57 AM