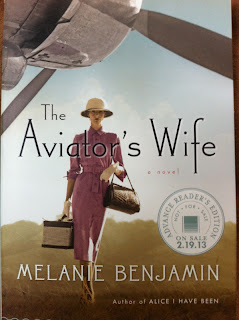 A few years ago I picked up a book called Alice I Have Been, an interesting novel of the imagined inner life of Alice Liddell, the girl behind Lewis Carroll's famous books, and liked it very much. Thus when I heard that the author, Melanie Benjamin, had a forthcoming book about Anne Morrow Lindbergh, I was excited to read it.  Even now that I've finished with it, I'm not sure what, precisely, my thought are.

The Aviator's Wife started out to be both a serious drag and a disappointment: poorly edited, with lots of bad grammar unbefitting a 1920s woman who is both an ambassador's daughter and a Smithie, for such was the young Anne Morrow. After about 80 pages or so, I even put the book down with the intention of not finishing. Charles Lindbergh was an arrogant asshole and a troubled man raised to believe that showing any emotion was a sign of weakness, and I never was convinced why Anne Morrow instantly fell in love with him.  But apparently the story was sticking with me more than I thought, and I kind of wanted to at least get to the kidnapping part of the story, so I picked the book up once more over breakfast and that's when the interest level kicked in for me.

Anne Lindbergh still made me want to slap her on every other page. She's smart and bright and articulate and from a socio-economic background that could let her accomplish *anything*, yet she wastes her life complaining to herself that she lets her husband control her and push her away and mistreat both her and her children.  I had so very little patience for her.

She could write, she could fly, she could have used her power as one of the most famous women alive to wreak some good during international times of strife, and there wasn't a door in the world that wouldn't have opened to her if she'd asked.  Instead, she lurks in her husband's shadow, utterly incapable of forming her own opinions of things, even going so far as to incorporate his isolationist, anti-Semitic feelings into her own worldview, despite knowing they're morally insupportable.

On the other hand, she was often a sympathetic character: the kidnapping of her first born, the utterly foolish and asinine way her husband dealt with the kidnapping, the death of her beloved sister and father, learning about the existence of her husband's multiple secret families, and having to live the rest of her life with grown men writing to her, pretending to be her missing son, and wondering why she never searched hard enough to find them. It was truly a life where personal heartache balanced out her privilege.

So I have to wonder if maybe that's exactly what Melanie Benjamin intended all along: to present a problematic character and invoke reader sympathy just often enough to get them through the book. If so, then well played, Ms Benjamin. Well-played, indeed.

This book will be published by Delacorte in February 2013 and I received an advance reading copy upon my request from one of my sales reps.

Posted by As the Crowe Flies and Reads at 1:51 PM