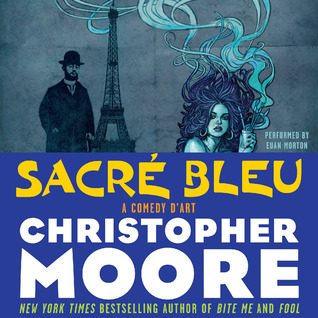 Summary from Goodreads: It is the color of the Virgin Mary's cloak, a dazzling pigment desired by artists, an exquisite hue infused with danger, adventure, and perhaps even the supernatural. It is... Sacre Bleu. In July 1890, Vincent van Gogh went into a cornfield and shot himself. Or did he? Why would an artist at the height of his creative powers attempt to take his life... and then walk a mile to a doctor's house for help? Who was the crooked little "color man" Vincent had claimed was stalking him across France? And why had the painter recently become deathly afraid of a certain shade of blue?
These are just a few of the questions confronting Vincent's friends - baker-turned-painter Lucien Lessard and bon vivant Henri Toulouse-Lautrec - who vow to discover the truth of van Gogh's untimely death. Their quest will lead them on a surreal odyssey and brothel-crawl deep into the art world of late 19th century Paris. Oh la la, quelle surprise, and zut alors! A delectable confection of intrigue, passion, and art history - with cancan girls, baguettes, and fine French cognac thrown in for good measure - Sacre Bleu is another masterpiece of wit and wonder from the one, the only, Christopher Moore.

While I do think that Sacre Bleu has a fascinating jumping off point (imagining another reason behind Van Gogh's death), color me completely underwhelmed by this book. However, I cannot pinpoint if it was more due to the content or the audio experience.  I thought the reader himself was pretty good--Euan Morton, whose performance of Fool, another Christopher Moore book, I enjoyed--though the fake French accent was occasionally grating and also inconsistent. It's odd to me how a book with dozens and dozens, perhaps even hundreds, of individual sentences that were so funny that they made me laugh (or at least chuckle) out loud could be such a dull book overall.  If I hadn't had this book on audio, I would have put it down after the first few chapters to read something else, or at least heavily skimmed it to get to the end, but as it was the only book I had to listen to on my commute, it was just tolerable enough to finish.

Mostly I found the story tedious. Jokes about penises and how they can be used to scare off the housemaids only go so far, you know? Another thing that annoyed me is the inconsistency of the third person narrator in referring to the painter known as Henri Marie Raymond de Toulouse-Lautrec-Monfa. Sometimes it was Henri. Sometimes it was Toulouse. Sometimes it was Toulouse-Lautrec.  These were not characters, mind you, calling him by various names; it was the third person narrator. And sometimes the reader would slip more into a British accent than into a French-person-who-speaks-English accent. That being said, I did feel that I learned a little about some of the celebrated paintings of the day, and in this aspect the audio is inferior because I believe that every historical painting referenced in the novel was printed in full color in the book itself, or at least in the hardcover version.

I'm not ready to write off Christopher Moore just yet, but I won't be rushing off to read his next book, either. I don't particularly mind crude, but the two Moore books I've listened to seem to specialize in an overbearing, heavy-handed, and pervasive crudeness, when in my opinion a lighter counterpoint of crudeness would be more effective and render a funnier and more overall enjoyable piece of fiction.

NB: I asked for, and received, a complimentary copy of the audio book from my wonderful Harper sales rep.
Posted by As the Crowe Flies and Reads at 9:00 AM