Anguilla, or There and Back Again, Part II

While I do not strictly identify as a morning person, I transmogrify into one when I’m in Anguilla.  There’s something about the brightness of the morning, the clarity of light, that makes me rise with the dawn. Sunday was my first morning waking up on the island, and there was a light shower right after sunrise, so I turned off the a/c, threw the windows and balcony doors wide open, and got back into bed so I could listen to the raindrops on the palm fronds outside. 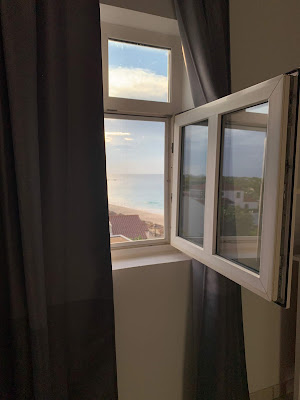 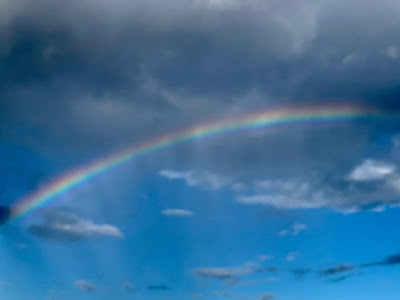 I made coffee and sipped it while reading in bed. A little after 7:00, the rain stopped so I got dressed and went for a walk. My early venture was rewarded with a beautiful rainbow.  With the breeze, I was actually just the tiniest bit chilly and wished I had brought my coffee to the beach with me.

Sidenote: I had the most glorious weather on this trip of any of my many trips to the island.  This was my third November visit (I think) and it was sheer perfection.  There wasn’t a single time where I felt uncomfortably warm, no matter where I was on the island.

After a walk along the beach, a swim, and hanging out under the umbrella to read, it was time to get cleaned up for lunch. My destination for the afternoon? Straw Hat for an early lunch and then to while away a few more hours reading in their complimentary chairs. As always, the staff was so welcoming and solicitous of my comfort. 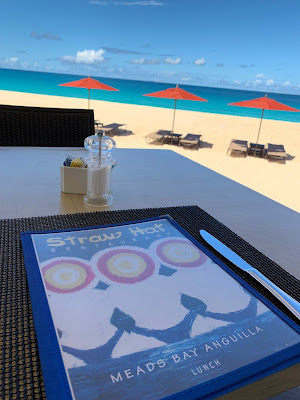 After much deliberation, I decided to order the blackened lobster and and shrimp tacos with mango creme fraiche and chipotle aioli.  It was just as amazing as it sounds.  I also enjoyed some iced tea (I wanted to hydrate but avoid ordering bottled water) and two ti punches whilst enjoying my book. 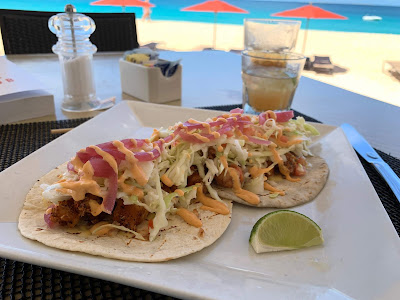 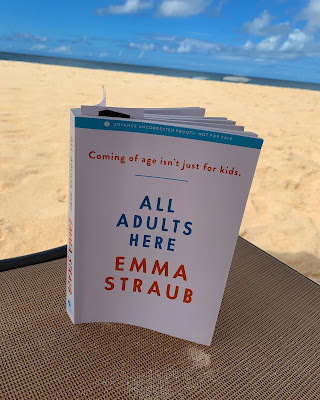 Emma Straub is a fellow bookseller and a very good novelist.  Her new book will be published in May 2020, so request it from your library or indie bookstore now! Pulling off a coming of age story for three generations of a family is no small feat and Straub manages it with style.  Whether we have family who aren’t really friends, or friends who are definitely family, we all need second chances at forgiveness, not least of all for ourselves.

After a few hours enjoying everything that Straw Hat has to offer, I ambled back to Turtles Nest for a brief nap before sunset.  Thanks to a tip from somebody on the TripAdvisor forum, I walked east on Meads to get a better vantage point in order to see the sun set into the sea instead of behind the Four Seasons. Well, aside from the fact that I neglected to put any bug repellant on my legs, it was totally worth it.

The face of Meads Bay has changed considerably since my first stay there in 2009, when Carimar was my home base. At that time, Turtles Nest stood out a bit like a sore thumb, taller than any other structure on the beach. Now, though, there are humongous luxury villas that intimidate the beach in the same manner, plus the new accommodations under construction at Frangipani which loom a tad higher than Turtles Nest does. 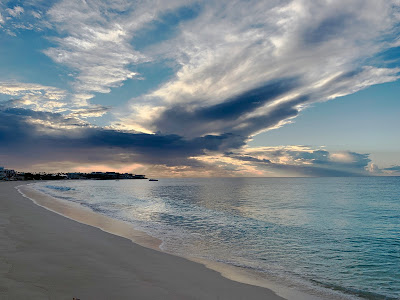 What at first promised to be a somewhat subdued sunset turned into a true spectacle.  I think it’s one of the best I’ve seen in many trips to the islands, and I even caught a tiny glimpse of the green flash!  I’ll include a video here, but I’m not sure how worthwhile it is.  It gets rather shaky in spots because I was alternating standing on one leg while scratching my leg with the other foot because the sand fleas find my ankles delectable. 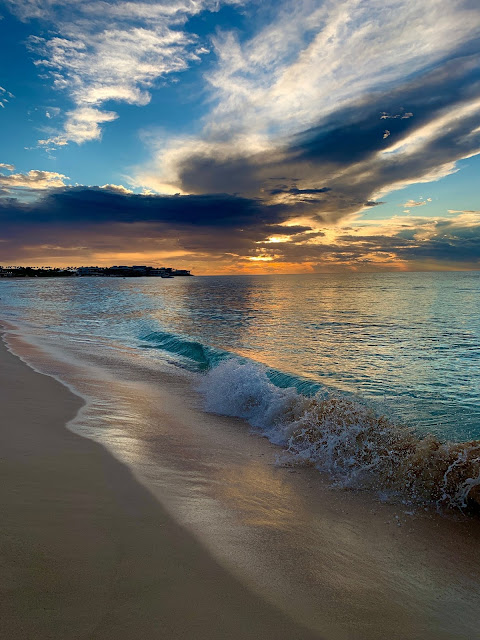 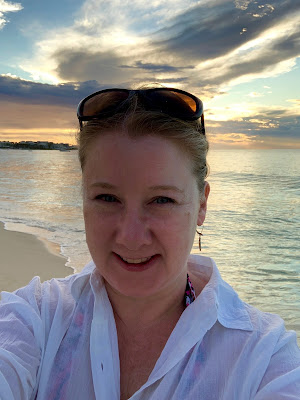 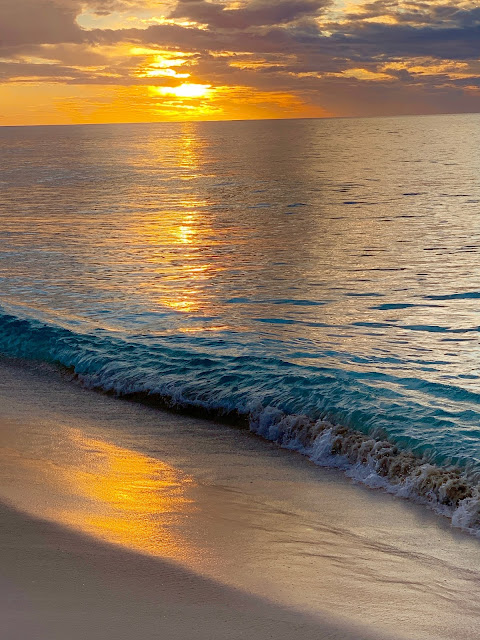 As soon as the sun sank below the horizon I walked double-time back to Turtles Nest just to keep those damn sand fleas off of me.  I had time to enjoy a glass of the complimentary white wine and to clean up from my beach time before heading off to Dolce Vita for dinner. This was the first dinner reservation I made for myself back home before the trip when I carefully laid out my grid for where to dine on which night. Abbi, the owner, wrote me back the sweetest and most gracious confirmation, so it was with a true spring in my step that I drove to Sandy Ground for my first real dinner on the island.

So imagine my surprise when I walked in to see a young couple being seated at my table. My surprise turned to shock when the host could find no record of my reservation at all.  He rushed to assure me that they could accommodate me, but I was just bewildered and a little bit mortified that they would think I’d just show up for dinner unannounced, as it were.  I grabbed my phone and quickly skimmed through my emails to find proof, when my jaw dropped.  Apparently I’d made my reservation for Monday night.  Mystified how I’d made that mistake, I checked on the website and realized: the little calendar that one clicks on to select the desired date for a reservation runs Monday-Sunday, not the usual Sunday-Saturday that many Americans are accustomed to.  I hadn’t checked closely enough to see what date I’d selected; I used visually reckoning to select what I thought was the first Sunday of the month but inadvertently clicked on the first Monday.

Though disappointed not to have one of the beachfront tables (which were being reserved for people who weren’t too idiotic to book the correct day of the week), I had one nice consolation: I was seated in the second row underneath one of the lamps that gave me ample reading light. I sheepishly explained to Argen, my server, what my gaffe was and he was very kind about it and was very attentive for the rest of the night. 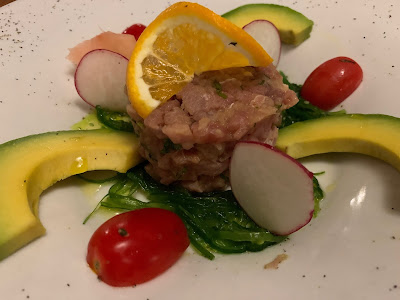 I usually opt for the arugula and bleu cheese salad to start. Not only is it delicious, it’s a sure-fire way to ensure I actually eat a few vegetables. They had no arugula, so I decided to try the tuna tartare.  Alas, it was not for me.  The tuna was a little stringy and the avocados were just shy of being ripe. I ate about half of it before deciding that was enough.  Besides, I had the world-famous lasagna coming for me entree, and we all know that it’s filling enough on its own. 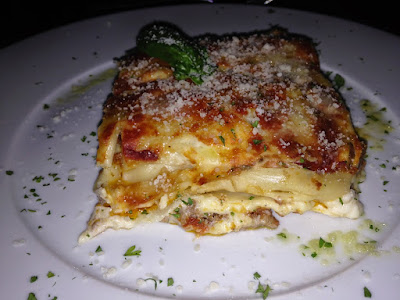 Despite not completing my appetizer, I was not able to finish this delectable bundle of meat, cheese, and béchamel, so I wrapped it up to take home for leftovers later in the week. Which is not to say that I was too full for dessert.  No, sir!  I ordered the pear poached in red wine and accompanied by a white chocolate mousse. 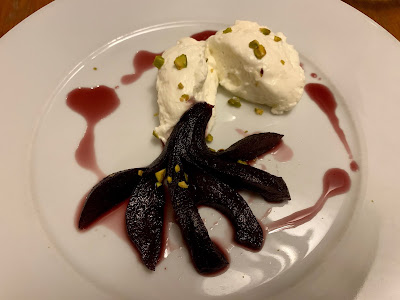 It may not be much to look at, but it’s my favorite dessert I’ve ever had at Dolce Vita and one of the best desserts I’ve ever had on Anguilla, full stop.  It was the perfect ending to a perfect day, and it completely redeemed the lackluster tuna tartare as far as I was concerned. I drove back to Turtles Nest with the windows down to enjoy the feel of the night breezes on my skin, where I tumbled into bed to finish my book.  Yes, I could definitely get used to endless days like these.

Posted by As the Crowe Flies and Reads at 9:35 PM