Anguilla, or There and Back Again: Part I 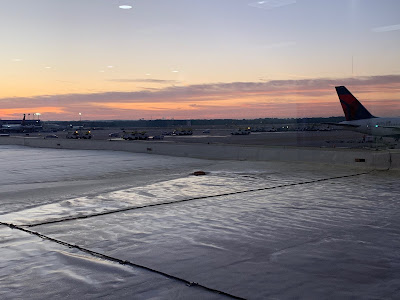 Earlier this year, my boyfriend and I visited London for the first time. It was a magical trip - it was his first trip to Europe and our first major international trip together, and we discovered that we travel well with each other.  Upon arriving home stateside, however, my wanderlust was rekindled in a really strong way.  Due to budget and circumstance (my best friend’s wedding, a new job, a major move), I hadn’t been able to visit Anguilla, my favorite spot on earth, in nearly three years, but a quick check of my frequent flyer account confirmed that I had enough miles to get me to St. Maarten. A quick conferral with my boyfriend determined that whereas I had sufficient paid time off for a week long getaway, he (alas) did not, so I booked a solo return trip to Anguilla.

Which means that from May until November, I had the fun of planning and anticipating my entire trip. The most fun of which was determining where to stay - do I return to my beloved Barnes Bay and rent one of my usual places there or try someplace new? Despite getting a free flight, I still needed to be budget conscious, but because it was a solo trip, I also wanted to feel secure and not stay in a remote location. I considered the apartment at Roy’s and the ever-popular Ferryboat Inn, but in the end I chose Turtles Nest on Meads Bay. Since Meads Bay was home for my first ever trip to the island, it felt like I was coming full circle to stay there for my first solo vacation there.

Since my last trip was in 2016, I was eager to see what changes Hurricane Irma had wrought on the island, but come November 1, the airline had slightly different plans for me.  My originating flight was delayed by 7 hours, and since Delta only has one daily flight to SXM, my vacation began one day late. Thus it was a mere 29 hours of travel time by the time I landed in St. Maarten, where I grabbed a boat to Anguilla. I hadn’t made a reservation, instead opting to take either the public ferry or one of the shuttle boats, depending on who was leaving soonest and Calypso was the winner.  $65 later, and about one hour after landing, and we were racing across the channel to Anguilla, but in the mean time I sat back and enjoyed the ride with my complimentary rum punch in hand. 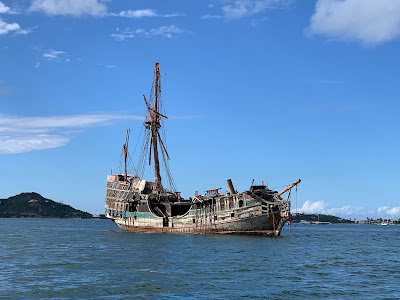 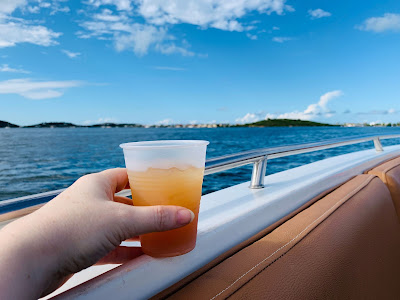 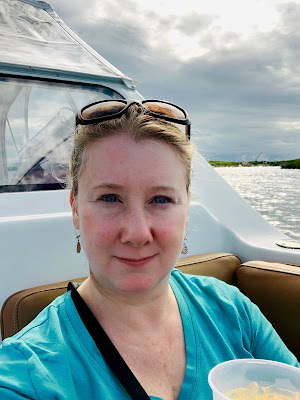 I was glad to get off the boat for multiple reasons, but not least of which was the preponderance of ugly Americans sharing the ride. Badly behaved and giving the rest of us a bad name, there was one couple and a family of four on my boat who were the very picture of entitlement. They outright refused to tip the luggage guy even after he came up to them asking for one (and he handled a LOT of bags for them) and they sat and groused loudly about the boat not leaving on time (we left a few minutes late) and how they weren’t paying good money to sit around waiting.

I cleared immigration in record time and walked out of the new-to-me ferry terminal to find my rental car from Ronnie Bryan and then made my way immediately to Turtles Nest.  Jacquie was working in office when I arrived, so she walked up to my room (all the way to the 4th floor!) and showed me around.  I’d booked a studio, which turned out to be spacious, and upon advice from other travelers I’d requested one with a view, and so I’m happy to say that unit 4BW’s views amply compensated for walking up all those floors to get there. Jacquie also provided me with a complimentary rum, which I sipped while unpacking and changing into something more beach-appropriate.

I arrived at the right time - the light was just turning golden so I walked the beach and considered my great good fortune at being back in my favorite spot on earth. 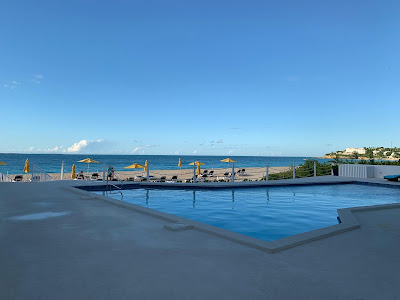 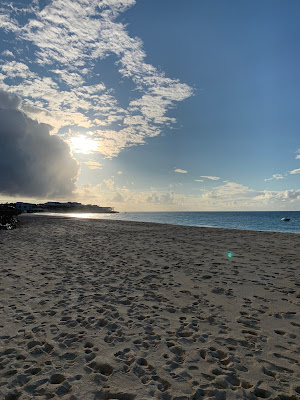 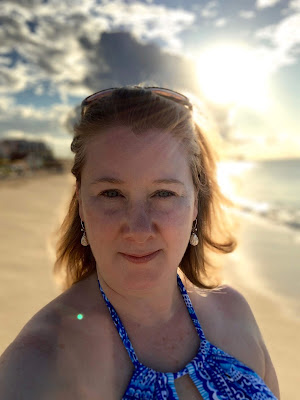 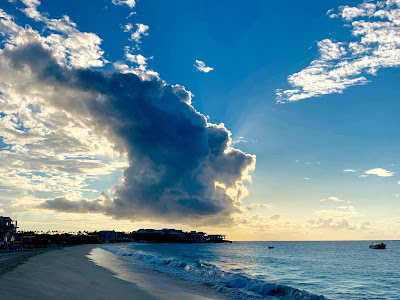 As you can see, the beaches are hideously crowded. That gorgeous water was calling to me so I took a quick dip before heading back up to the room.  I’d originally been planning to have a casual beach dinner at Blanchards Beach Shack, a 7-minute walk up the beach from Turtles Nest, but apparently they were closed for the phenomenal private wedding taking place at Four Seasons. Instead I ran up to Best Buy for some cheese & crackers to nosh on with the complimentary bottle of wine that Turtles Nest left for me in the room, along with some breakfast essentials for the upcoming week. 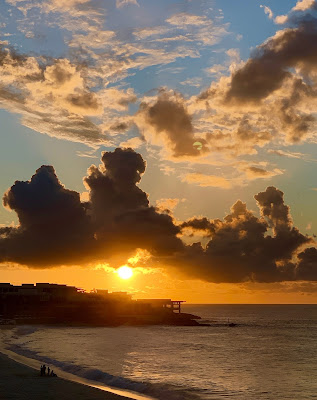 The sunset was beautiful and the perfect backdrop to my first meal on the island, and since I had been awake for roughly one billion hours and the wine was having its wicked, wicked way with me, I decided to make an early night of it.  The air conditioner chilled the room to perfection and I fell asleep reading with the distant sound of the waves in the background. Home at last. 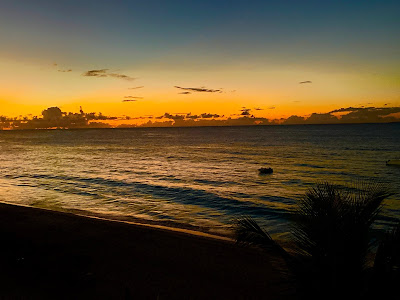 Posted by As the Crowe Flies and Reads at 5:13 PM