Usually I don't sleep well on my first night on the island--it's part of that bizarre combination of exhilaration and exhaustion that brings on a fitful night's sleep--but not this time.  The mattress in our room was excellent, so when the streaming sun woke me at 6:00, I dutifully snapped a photo with my phone and then grasped at my sleep mask to doze for another hour.

We cooked breakfast and ate in the villa that morning, having ascertained via Facebook that Geraud's was, in fact, still closed for the season.  We'd gotten our hopes up the day before when Stacian told us that Geraud's was open, as she had driven by that day and seen the doors open, but alas, they were closed for renovations. The doors were open to accommodate the workers.  Le sigh.


But it's hard to be down for long when you have a day at the beach in front of you. We packed up a bag full o' stuff and selected two beach chairs from the villa shed (they provide chairs, umbrellas, snorkel gear, noodles, water shoes, you name it) and off we went to Rendezvous Bay. We had hoped that The Place was open, but when we found the gate barred, we settled for some palm shade in front of Anguilla Great House instead. 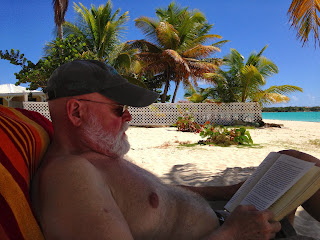 I say "settled," but it's not like it was a hardship or anything. More than anything else we were disappointed not to visit with Moe and Dave.  Well, that, and we didn't want to have to eat lunch at Anguilla Great House.  I trust I take nothing away from that fine establishment when I say that their sandwich fare leaves a little to be desired. Not long after we've adjusted our chair positions to keep in the shade, we notice a couple of guys and a wheelbarrow walk by in an easterly direction.  Though I kept the thought to myself, I was hoping that it was Garvey of the Sunshine Shack fame.
It was. So around 12:30 I poke DH, who had nodded off, and informed him that I was feeling a mite peckish, and was he up for a short walk up the beach in search of nourishment? He turned around to head to AGH but I said, no, I had a hunch that Garvey's was open and would he take a chance. He was game, and as we walked up, an extremely handsome man with an outstandingly gorgeous smile greeted us: Garvey at last.

Nobody else was there, as it was only the third day he'd opened for the season.  We grabbed a table in the shade (where else?) and Garvey recited the lunch menu: whole red snapper, grilled chicken, or grilled ribs.  All served with cole slaw, green salad with avocado, and rice & peas.  Sounded great to us, but that was our big misstep of the day: not being able to see menu prices. You'll see what I mean in a minute, but I have more photos and more gushing before I get to that point. 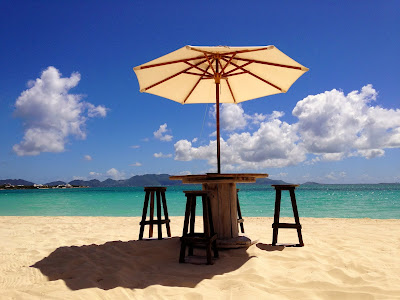 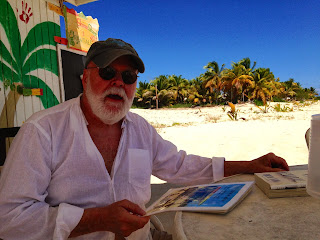 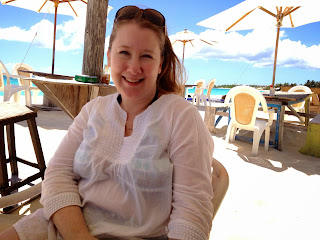 DH ordered a grilled combo platter and I selected the whole red snapper. While we waited, he mixed us a rum punch, but only after I interrogated him about how sweet it was.  He said not very, and I asked him to make it not sweet at all, and hold the cinnamon, please.  He laughed at that and soon presented us with some rum punches before rushing off to tend the grill. 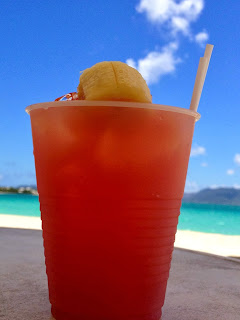 Turns out that it was still a little too sweet for my taste, but not so unpalatable as to actually prompt me to get up and ask for more lime juice.  WAY to much effort.  Besides which, I was mesmerized both by my book and by the scenery whenever I happened to look up.  I ask you now, what's a little too-sweet rum punch in a setting like that? Not a thing. Merely a trifle. In fact, DH and I shared a third one by the time our food was ready.

I was already congratulating myself on trying Garvey's for the first time--and in a rather sublime mood--so I was enjoying the thought of the food before it ever came. Feet in the sand, the surround-sound of the surf, excellent book and even better company. So when the food came and it was actually really fresh, really tasty, I almost couldn't stand the perfection of the moment...little did I know.  Dunh, dunh, dunh!

The snapper was very flaky and I picked the skeleton as clean as I could without actually sucking on the fish head.  The bbq combo platter was better than any others we'd sampled on the island, including B&D's. Maybe it's because it was our first day and we were so glad to be back in Anguilla, or maybe it was the setting, but at the time it was one of our most memorable lunches on the island.  Alas, in retrospect, what makes it most memorable is the price.  Two lunches, three rum punches, two small bottles of water, and one non-alcoholic frozen fruit drink brought our lunch to a sizable $92, including a clearly marked service charge.  Mind you, we were lucky to have that much cash between us. That was definitely more expensive than our lunches at Cap Juluca (which admittedly was sans alcohol) and Trattoria Tramonto, which until that point were the most expensive lunches we'd eaten on Anguilla.

I'm not saying don't go to Garvey's Sunshine Shack.  Not at all.  We loved our time there--and if I break it down, it technically only cost us about $20/hour.  I'm just suggesting that if you're not the owner of your own private jet and/or yacht, you may want to ask about prices before ordering if no menu is provided.  Then bring a wheelbarrow full of cash with you. That's all I'm sayin'. 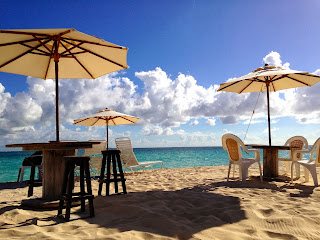 Around 5:00 we packed our beach bag and walked back to the car and on the way home we debated about dinner.  We had been thinking about going to B&D's bbq, but now that we'd essentially already eaten that for lunch, we wanted to try something else. Once we were back at the villa, I called around to several places, trying to determine whether they were open for the season or not.  After Veya and Dolce Vita were operating under different dates from the official Open-Closed list, I was taking no chances.  I'm frankly astonished that more restaurants didn't have appropriate outgoing messages on their answering machines or voicemail (I'm looking at you, DaVida and Big Spring!).

I started thumbing through the Yellow Pages in the phone book and called places I wasn't even that interested in, like Barrel Stay and Sand Bar and Ripples. I really didn't want to go back to Ferryboat Inn after our bad prior experience and we were on the verge of calling the Corner Bar for a pizza when I remembered Ocean Echo!  The phone book we were using was too old for them to be listed, so I looked them up online and called to make a reservation. In the meantime, we had a quick dip in the pool before our cocktails.

Excited at the possibility of seeing Andrea, who works at OceanEcho for lunch, we pulled into an almost-empty parking lot.  Again, we were the only diners with a 7:30 reservation. Andrea was not only not working that night, she was on vacation and not on the island at all, but we enjoyed chatting with Tina, our server. The menu was slightly different from what we saw in June and it was labeled Lunch and Dinner Menu. 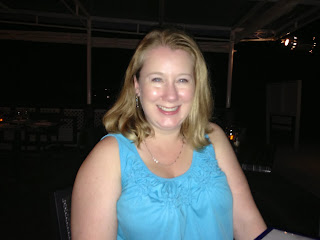 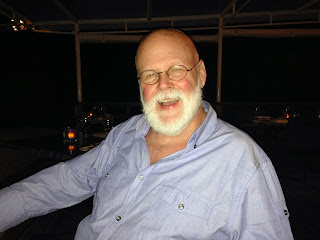 I ordered a mango and strawberry cocktail called a Tequila Sunset, which turned out to be disappointingly pedestrian--I should've just had a gin & tonic or a glass of wine. Anyway, I ordered the Rasta Pasta with sautéed shrimp and DH had the Caesar salad with grilled shrimp. Both were good--fairly standard, but quite solid and fresh-tasting. No wow factor, per se, but then again, we weren't looking for that, nor were we spending wow-factor prices. I ate all of my shrimp and about half of my pasta, bringing the rest of it home with me. We ended up picking the remaining veggies out of it to put in an omelet the next morning for breakfast!
I didn't think we wanted to order dessert, but I'm always interested in cataloging what's on offer for future reference.  DH's ears perked up when Tina said they have a banana & chocolate spring roll--my sweet husband can't pass up a dessert with bananas, so we ordered one to share.  It was good, served with vanilla ice cream and the perfect size for us to split. More than that and we would have been WAY too full.

We also ordered a bourbon to sip with dessert, and by that time there were a few more tables filled in the restaurant, which made us feel good.  While I always love my beaches empty, I start feeling pretty bad when the restaurants are.

The drive home was short & sweet.  I'm a little surprised that I didn't miss the turnoff to the villa in the dark, but having the Cuisinart entrance as a landmark sure helps! We tumbled into bed with our books, eager to see what the next day would bring.

Coming up next: Storms from the east, a mis-adventure at Meads Bay, and a new place for dinner...
Posted by As the Crowe Flies and Reads at 12:18 AM