More Bookish Things, or Why I Love My Job

Oh, y'all.  I will never, ever get rich in the traditional way. I don't have a 401-K and I will probably have to work until I am so old that I can no longer stand up without assistance. But I have a job that I love, one that provides me with free books and opportunities to meet and know (and in one specific case, fall in love with and marry) authors and illustrators.  Yes, I work in a bookstore, but it's not just retail.  I'm fortunate to work in a place with interesting people, all of whom value ideas and literature and art and the force for good that they can all bestow on the world.  I present you today with two recent and one not-so-recent bookish events that make me love my job, despite the long hours and the not-precisely-rewarding pay.

So, back in June, Bob Werner, my sales rep for Macmillan, invited me to a posh shindig in Boston because Tom Perrotta, one of Macmillan's authors, was being honored by 826 Boston for his contributions of time and talent to the organization. I didn't know anything about 826 before that night, but now I am enthusiastic admirer of what they do, which is to encourage literacy and develop writing skills for public school kids, ages 6-18. Macmillan sponsored a table for the 826 award gala and fundraiser and thus it was that I got to attend an event that is seriously above my pay grade.  Thank you, Bob and Macmilan! The other booksellers at the table and I had a grand time and it was fun watching the live auction fundraisers.  I even put in a few bids, safe in the knowledge that I could bow out well before the bidding stopped.

Bob and his friend Cedric invited me to ride out to Boston with them for the evening, so not only did I have a great time at the gala, I had the pleasure of being in the company with two fabulous fellas, with lots of book talk and discussions about teaching, urban living, travel, and that inner call that Cedric and I both occasionally hear to move back south (he's from NC, I am from MS).

More recently, just over a week ago I attended the NEIBA (New England Independent Booksellers Association) fall conference in Providence, RI.  Though it runs for three days, I was only there for one day and evening, but in my opinion I was there for the best parts of all: a day of education, a speed-dating book session over lunch, and the author cocktail reception. It's also the time when I get to reunite with other New England booksellers whom I only see a couple of times a year at such gatherings.
It also happens to be the place where I put my foot in my mouth for the second time with an author I quite admire, and for the second time, he proved himself to be The Most Gracious Author In The Entire World. I speak of Wiley Cash.  I generally acquit myself with a shy kind of aplomb when it comes to meeting & greeting authors.  I'm not the most gregarious person in the world (by a long shot!) but I generally feel comfortable in small groups with authors and illustrators and other bookish folk. But for some reason, Fate would have it otherwise when Wiley's and my paths cross.
Still reeling from my first foot-in-mouth episode from a year ago, I cheerfully determined to make it up to him this time.  So when Wiley and I ended up at the bar at the same time, I offered to buy him a drink. He demurred, I insisted, and all was well.  That is, until he quipped that he probably needed alcohol to make him more interesting.  To which I laughingly replied, "Oh, come on. Nothing could make you more interesting." [awkward pause, in which we both realize what I just said actually means the opposite of what I intended.]

Ahem. My face now the color of my shirt, I try to stammer out an apology/explanation/ retraction, but Wiley was the very portrait of graciousness. 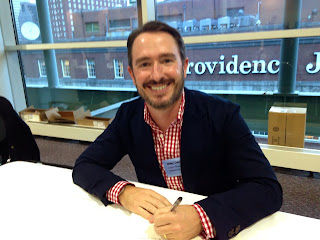 Naturally I ended up sitting next to him at the dinner following the reception. Naturally. HarperCollins sponsored a dinner for six of their authors and it was pretty amazing.  Wiley was there, plus debut author James Scott (who incidentally is practically my neighbor), the non-fiction writer Simon Winchester, and Christopher Moore, on whom I now I have a total reader crush.  They were all terrific, telling the stories of their books and how they came to be published, but Christopher Moore reminded me palpably of my high school classmates from MSMS, the Mississippi School for Mathematics & Science: bright, funny, articulate, a little geeky, and the slightest undercurrent of introversion. He made me feel like I was among my people again, and I'm not sure there's a higher compliment I can pay. (How I managed not to snap photos of him or the rest of the other authors, I have no idea, especially since I apparently thought the desserts demanded documentation not once not twice, but three times. Totally my loss.) 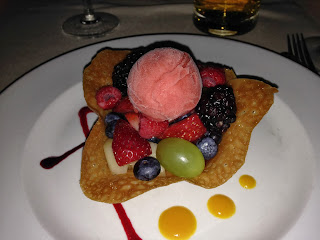 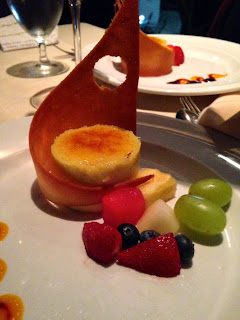 The last bookish event that I'd like to mention was the night before I left for vacation last week, so it happened in a bit of a panicked whirlwind.  That same day, I had to schlepp a car full of books down to Springfield to sell at a conference for the Center for Human Development (how's that for a vague name?), then rush back to the store to prepare for the author event.  There aren't a lot of books that I re-read--Jane Austen, Harry Potter, and The Lord of the Rings comprise most of the short list--and it's pretty rare that I would read a book twice in the same year, much less three times, but that's exactly what I did with The Rosie Project by Grame Simsion. This book is funny, y'all.  Seriously funny.  Laugh-out-loud funny. Smartly funny.  It's easy to do dumb-funny. Humor is pretty cheap, after all. But smart funny? That's damned difficult to find.
Graeme Simsion is from Australia (and incidentally was the second author from Oz that my little bookstore hosted in as many weeks) and while it's already a best-seller in his homeland, The Rosie Project is on the cusp of being an international sensation. He's sold the rights in three dozen countries, as varied as Brazil, Latvia, Israel, and Japan, and a film is already in the works.  What he's done is written a 21st century romantic hero, and while the idea of opposites attract is as old as love itself, what he presents to the reader is an entirely fresh and tantalizingly funny take on that meme. Don Tillman is a geneticist on the Asperger spectrum--he's bright, loyal, and handsome but possessed of behavioral quirks that most women find off-putting.  He's been on dozens of first dates but no second ones; longing for a life partner, he puts together an insane questionnaire with the sincere but misguided belief that scientific method will succeed where traditional arenas for dating have failed. Then along comes Rosie, who totally fails the questionnaire: she smokes, she drinks, she works in a bar, she's habitually late, she wears makeup and dyes her hair, she's vegetarian, and she's in need of Don's help to identify her birth father through DNA testing. You know where the book will end, but what you cannot possibly predict are the delightful and poignant moments you pass through on the way there.
In less careful hands, Don could have been a caricature of himself, but instead Simsion's kind and generous handling of the character renders a remarkably real and rather tender portrait of a man searching for love. I think this is a book with an appeal that is as close to universal it gets.  To have a book with universal appeal AND for it to be so funny it will make you snort is a rare thing, indeed. My mom, my husband, and my three coworkers (with quite divergent tastes, thank you very much) all fell in love with Don and Rosie, and I think you will, too.

Just read it. You can thank me later.
Posted by As the Crowe Flies and Reads at 2:32 AM