I do not understand why Jill McCorkle doesn't have more of a national readership.  She's admired and read widely in the South but most of my Yankee friends, co-workers, and customers have never read her. Personally, I think she is a national treasure AND her latest novel makes me want to hug her.  I love it.

I think it's swell when my feelings towards a book are so simple and uncomplicated that I can use that simple declarative: I love it. I also love Algonquin, McCorkle's long-time publisher, for their cozy packaging and brilliant marketing campaigns.  I can't think of another publisher, large or small, deeper pockets or not, that does a better job supporting their authors.

NB: Basically this post will be one big lovefest. So consider yourself forewarned and forearmed and whatnot. (Aside: "forearmed" is a strange word, no? Wouldn't anybody who possesses a full, and thus lower, arm be "forearmed?")

Life After Life is set in the small town of Fulton, North Carolina, and more particularly within the microcosm of Pine Haven Estates, a retirement community where most of the characters live, work, or visit. Which means that Jill McCorkle has written the first book I've read this year that features the final frontier of reading -- older people. I've said it before, but I think it bears repeating: it's easier to find a good piece of fiction written about a bi-racial, gay, born-again Zoroastrian fundamentalist (or insert problem set of your choice) than it is to find good fiction written about the over-70 set. While I'm pleased that large sections of the populace once deemed as "other" by the average reader are now well represented in contemporary fiction, I'm puzzled why we don't have more portrayals of septua- or octogenarians when, if luck and health are on our side, we will all cross over that nebulous boundary into senior citizenship.

But I digress.  What I love about novels set in small towns is the ridiculous diversity they can provide. I don't say this very often, but I entirely side with Mrs. Bennet over Mr. Darcy on that point. In Life After Life, the reader meets: Abby, the heartbreaking little girl who, caught between her own unpopularity at school and her parents' fighting at home, chooses to spend her time amongst the gentler souls at Pine Haven; Stanley, the desperate man who pretends to dementia after his wife dies in order to release his younger son from the responsibility of taking care of him; Sadie, the former teacher and now Pine Haven resident who believes that the secret to unlocking your own happiness lies in communicating with your inner third-grader; Rachel, the Yankee who moves south after her husband dies so she can be amidst the surroundings of her one great love, only to discover that her lover was not the man she had built him up to be; CJ, the young mother trying to make ends meet as the cosmetologist to the seniors; and Joanna, who makes amends for her early life's bad decisions by dedicating the second half of her life to hospice care, ensuring that nobody in town need die alone.

McCorkle offers a hodge-podge of styles to carry the story forward. Many of them are third person narratives that flit about from one character to another, but she also employs excerpts from the notebooks Joanna keeps about each of the people she has sat with at the end of their lives, interspersed with a few first person narratives that reflect the state of mind of those dying individuals. It's true that because of these narrative jumps the novel felt a little disjointed to me at first, but once I became adjusted to their rhythm I reluctantly had to admit they served the story quite well.

One of McCorkle's greatest strengths is her ability to simultaneously show that while there really is nothing new under the sun, people (even those whom you think you know well) have an endless capacity to surprise. She gives warmth and sparkle, wit and dignity to her characters and embraces them wholly, despite, or perhaps even because of, their flaws. In short, she plumbs the depths of the human heart with compassion and precision.

Here are some random passages that I marked as I read; I include them to give you a flavor of her writing.

p. 124: "Marge is negative about everything, her doughy face permanently etched in a frown, every suggestion and thought negated unless it involved her relationship with Jesus, who to hear her tell it, thinks she walks on water."

p. 104:  Regarding some people's notion on the segregation of heaven (not racially, but according to levels of worthiness): "'Well," Mrs Silverman said, "I think that if there is a heaven, then it has to be a socialist society; otherwise it wouldn't be heaven but just more of the kind of unjust hell you're always describing.' No on, not even Mr. Stone, said anything after that and Abby decided she would try to use everything she learned from watching Mrs. Silverman -- hands on hips, one eyebrow raisesd, little words like if made to sound big and powerful."

pp. 57-58: "Some have many hands reaching from the bedside and others have none, and yet in that final moment, the air heavy and laden as molecules regroup and reshape in preparation for the exit, it is all the same. It is like the moment when a snake enters the yard and the birds go silent. The silence begs your attention; it's time to go. The journey is over."

Sadie, musing on her final days, p. 306: "She always wanted some days of the week underwear, but that seemed so extravagant, especially for someone who was married and taught school. But then she got Lynnette some and Lynnette never wore the right day at the right time, but that was okay. Lynnette was a child who hears that different drummer and Sadie is proud of the fact that she never tried to change what the child was hearing but instead encouraged her to do her best and be happy. IN the middle of a dark night she liked to plant her open palm on Horace's back and draw in the heat and the she would move her hand in slow steady circles. He will call soon. He always calls and she is always right ready to answer."

NB: I read an advance reading copy of this book provided by the publisher, Algonquin.  They will published Life After Life on March 26, 2013. I may also post again about this book after the Winter Institute dinner, where McCorkle will be one of the stars. 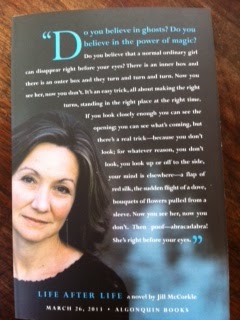 Posted by As the Crowe Flies and Reads at 8:16 AM