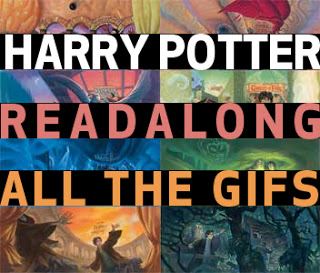 Again, I am not at all sure why I had dismissed this book in my memory as so "eh."  Sure, there's a LOT of setting up for the series, but I raced through the book this time almost as quickly as I raced through the audio on my first experience with the story. It makes me full of feels. I didn't have quite as many dogeared pages in the second half as the first half--again, probably because I was feverishly turning the pages to get to the end. Here's what I noted:

Chapter Ten, p. 164: Harry gets his broom. As long as we (and by "we" I mean "JK Rowling") are talking about the lack of Slytherin's fairness, let's address something.  First years aren't allowed to have brooms. Unless you're a Gryffindor named Harry Potter. And since Harry didn't buy it for himself and since he doesn't have a proxy guardian in the wizarding world, somebody would have needed Harry's permission to use his money to buy his broom. Which means that a professor, either Dumbledore or McGonagall, bought Harry's broom for them. As in either the headmaster or the deputy headmistress/head of house. How is that *not* blatant favoritism? Cf: This moment with CoS when Draco gets on the team and his father buys the team new brooms and everybody gets ALL up in arms about it. The school showing favoritism to one boy over all others and flouting the rules to do it vs. a parent buying equipment for his son's entire team.

Chapter Ten, p. 178. McGonagall only takes five points away from Hermione for trying to go after a troll. Cf: later, catching the golden trio out of bed past curfew, she takes away 50 points each. WTF? I mean, I get that Gryffindor had to be in last place for the House Cup for JK to play her final card, but for realz? I don't think so.

Chapter Eleven, p. 183. Harry decides that it's Professor Snape who's after the stone and for the first time (but not the last) in the series, it's Hermione who is the Voice of Reason: "I know he's not very nice but he wouldn't try and steal something Dumbledore was keeping safe." That's right, Harry and Ron.  Not Nice doesn't equal Evil. Don't they know that he is the very model of the anti-hero archetype?  Everybody sing along!  (Edited to add: btw, that's a whole song filk done to the tune of "I Am the Very Model of a Modern Major General" from The Pirates of Penzance. Why aren't you people commenting on its brilliance? It is g-d funny. Pure comic genius.)

God, don't I wish there were a gif of that? I guess this will do:

Chapter Eleven, p. 186. Okay, quidditch is awesome.  But having Lee Jordan commentate on this match is about as fair and balanced as Fox News is when discussing Obama. Enough with the blatant anti-Slytherin bias, people JKR! Later, on p. 188, McGonagall finally gets angry enough to do something about it.  She's supposed to be the fair one and it took her long enough.

Chapter Twelve, p. 194: This just makes me happy.  Little do the Weasley twins know that in going after Quirrell, they're actually pelting Voldie with snowballs.  Well done, boys.

Chapter Twelve, p. 201. I just love this description of the invisibility cloak: "It was strange to the touch, like water woven into the material." I'm not sure that could be bettered. And let's pause for a second to acknowledge how difficult it must have been to give this back to Harry. After all, he had two out of the three deathly hallows in his position. He must have known that it would only be a matter of time before getting the third. Just goes to show how far the man has grown.

Chapter Twelve, p. 209. Oh, I think I cried here when Harry's seeing his family in the Mirror of Erised for the first time: "He had a powerful kind of ache inside him, half joy half terrible sadness."

Chapter 16, p. 271. Here we have foreshadowing of the end of HBP. Hermione and Ron insist on helping Harry go after Snape in order to protect the stone, Harry acts surprised about their being willing to go with him. I freely admit that I choked up at this point, too.

Chapter 16, p. 283. Ahh, the great chess match.  I'm sure this will figure heavily in today's readalong.  This is Ron at his best and it's the Ron that we see less and less of as the story goes on.  It shows bravery, strategy, and knowing the importance of the endgame, both literally and figuratively.  This is the Ron who might be worthy of Hermione one day.  It makes me sad that this Ron rarely makes appearances in later books. Something I'd like to mention, that I don't think I've ever seen anybody note before, is that takes another kind of bravery for Harry and Hermione to move on after Ron falls. It goes against almost every instinct they have to remain on the board and play the game to the end, and then move on again to the next obstacle before being able to go back and fetch help.

Chapter 16, pp. 285-287. God, where to even start?  That's our girl, cool and calm, solving the logic problem. She's smart, loyal, brave, and cunning in almost equal measure, truly embodying all four Houses. And then JKR gives her one of the worst, anti-feminist lines in the entire series: "Books! And Cleverness! There are more important things -- friendship, and bravery." Um, yeah, Hermione. You've just brilliantly demonstrated your own friendship and bravery ALONG WITH your bookish cleverness.  What the problem here, girlfriend?

Chapter 17, pp. 288-297. OMG, it's Quirrell!  Yes, I admit I totally bought into the whole "Snape-is-Evil" the first time around. I was as surprised as Harry was when it turned out to be poor, stuttering Professor Quirrell. And it was *totally* brilliant for Dumbledore to enchant the Mirror here to thwart Voldie.

Chapter 17, pp. 298-300.  Harry's conversation with Dumbledore, in which Dumbledore conveniently forgets to tell Harry that Snape never would have been in danger in the first place if it weren't for James & his friends. Dumbledore has just told Harry that he might not answer his questions, but he wouldn't lie to Harry, but I think he just did: "I believe he worked so hard this year to protect you because he felt that would make him and your father even."

But later, p. 304, when Hagrid gives Harry the photo album?  Again, I have all the feels. "Harry couldn't speak, but Hagrid understood."

But, oh, this is the worse part. Page 305. The hall is decorated with Slytherin colors because they've won the House Cup (aside: why does Hufflepuff have so few points?  That doesn't make sense. I get that they're in third place, but that seems extreme.) If Dumbledore didn't want to foment the Gryffindor/Slytherin rivalry, AND if he wanted to keep what happened with the stone somewhat secret, he shouldn't have whipped the rug out from under the Slytherins.  That's just sick, you bastard. He could have easily given Gryffindor those points the day before. 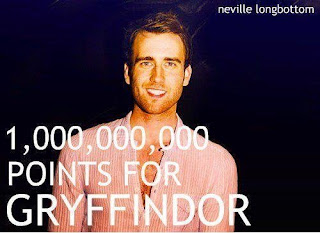 God, I loved this book.  There are many things I took issue with (obvs), but I loved it.  I love this world, I love these characters.

If you want to read more bloggers' thoughts about these books, please check out Alice's blog at Reading Rambo, because it was her brilliance that brought us all together.

Posted by As the Crowe Flies and Reads at 11:09 AM