Book (P)Review: Me Before You by Jojo Moyes 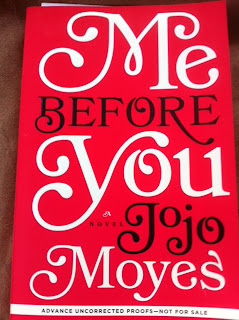 I find it interesting that within the course of two short weeks, I saw a film (the brilliant "The Intouchables") and read two books about wheelchair-bound patients and their caregivers, becoming just another instance of book synchronicity. One of the two novels was Me Before You by Jojo Moyes, whose previous book was the wildly popular (at least in the UK) The Last Letter From Your Lover. I said it once before, but it bears repeating: while I don't mind romance as a by-product in my fiction, I rarely turn to books where it is the raison-d'etre. This book is not only a romance, it's a tragic one, but that's not giving anything away if you've already read the back jacket (which proclaims that it's "a Love Story for this generation"). Which means, basically, that while it shares much of the same subject matter with "The Intouchables,"it lacks that film's pure joie de vivre.  Man, I am apparently all about using the French phrases today.

This novel should come with a warning: do NOT pick this book up unless you have a box of tissues by your side and several hours to spare. Because once you start reading it, you're not going to want to put it down, and once you do put it down, you're going to be a soggy, wet mess. Believe me, my cat Murray was quite concerned with my state of mind. Then again, anything that interrupts the administering of chin scratches concerns him.

Up until the motorcycle accident that made him a quadriplegic, Will Traynor was both a go-getter and a player--wealthy, handsome, charismatic, and a thill-seeker to boot.  Lou, on the other hand, is from an economically challenged working class family--bright enough to have gained university admittance, but required to join the workforce to help her family pay the rent when her sister gets pregnant and her father gets laid off. When the cafe where she's been working as a waitress for the last several years closes, she desperately accepts a six-month contact taking care of Will. Will and Lou couldn't be more different on the surface, so when they form an uneasy alliance that grows into the truest friendship either has ever known, nobody is more surprised than they are.

The catch, and of course there's a catch, is that Will and his mother are keeping a secret from Lou, and when she discovers what it is, she reacts with her characteristic passion, matched only by her pigheadedness.  But might Will's secret haunt Lou to the point she makes the biggest mistake of her life?

Let me clear: this is not a book with complicated twists and turns that will keep the reader guessing.  If you pick this book up to read, you will have a fair idea of the story-arc before you're even fifty pages into it, as it's the story itself that pulls you in; but the class issues, the family relationships, and the importance of having somebody to believe in you when you no longer believe in yourself give this book a heft that matches its heart.

NB: This book is already available in the UK, but it will be published in the US in January 2013 by Pamela Dorman Books, a division of Viking.  I read an advance reading copy of the book provided by my sales rep.
Posted by As the Crowe Flies and Reads at 12:39 PM