Book Review: The Colour of Milk by Nell Leyshon 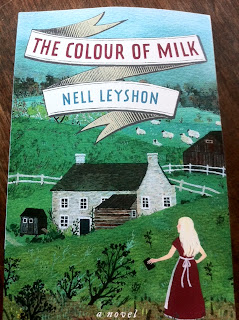 Warning: This review of Nell Leyshon's The Colour of Milk will be chock full o' spoilery goodness.  If you'd prefer not to know about finer plot points and what happens in the last 50 pages, don't read much further beyond this sentence, in which I tell you that the author has created an original and compelling voice that is the perfect counterpoint to the better-known drawing room narratives of (or set in) the Regency era.

Each section of the book begins, "this is my book and i [sic] am writing it by my own hand," and thus the reader comes to know our protagonist, Mary, who tells us more than once in her first person narrative that her hair is the colour of milk.  She is a teenager of indeterminate age when the novel opens in 1830, born with a bum leg, possessed of a backtalking mouth and something like an inability  to speak without giving offence. Her mother, three older sisters, and most especially her father have no use for her at all beyond the hard work they can get out of her, and as a farmer's daughter, there seems to be no end to such work--even to the point where she is forbidden to sit down during the day unless she is milking the cows.

The one source of kindness she knows in life is from her grandfather, a once-robust man whose legs have been crushed and who has been reduced to being a permanent invalid. Mary's father is a man of violent tempers who thinks no more of beating his wife and daughters than he would have thought of whipping his oxen if they weren't plowing properly. Mary herself is clearly possessed of a native intelligence that comes from close observation of her natural world and reflection thereof, though utterly uneducated and illiterate. Thus, she knows exactly what is happening one night when she wanders through the barnyard and sees one of her sisters copulating with the vicar's son, but she has no real idea of what social consequences could arise.

It comes with much displeasure but not much surprise when her father tells her one night that he has essentially sold her into slavery at the vicarage: Mary will leave home to work for the vicar, the vicar will pay her father.  Because, y'know, that's fair. Life turns out to be not quite as awful at the vicarage; Mary actually is treated mostly with kindness, thanks to the vicar's wife who values her very much. But the fact that it is not her choice to be there rankles her and her resulting impertinence gets her in trouble more than once.

Okay, here is the second spoiler alert.  If you keep reading on from this point, don't say I didn't warn you.

The thing about being a woman in the first half of the 19th century is that you are at the mercy of the men in your life.  It's bad enough if you're like Elizabeth Bennet, who at least is assured of her value within the family sphere; if the western world's favorite heroine had been assaulted during the course of Pride & Prejudice, we know that her family and the neighborhood, and most importantly, the law would have taken up her cause.

Not the case if you're born the fourth daughter to an impoverished and illiterate farmer in the west of England. In this way, the author aligns herself with the long literary tradition of heroines who are not only at the mercy of the men in their lives, but the victims of the men's perversity.  The very figures who should have been most protective of Mary, namely her father and the vicar, and the ones who abuse their position over and over.

When the vicar's wife succumbs to her weak heart, it's not long after that the vicar dismisses the second household servant and invites Mary into his study to drink tea with him on a nightly basis.  There he  takes the first steps in teaching her to read using The Holy Bible, and once the indecipherable black code resolve itself into recognizable letters, Mary is hooked on learning more.  Unfortunately, the vicar is hooked on Mary and utterly unhampered by any scruples that would prevent his preying on a young woman in his care. He starts touching her and sneaking into her room at night, claiming loneliness as his right to rape her, in exchange for teaching her reading and writing.

Mary decides to accept the exchange and never puts up any resistance to his unwanted fumblings until the day she decides she has learned enough from him and no longer needs to participate in his sordid quid pro quo. The vicar seems truly bewildered at her decision. One can practically hear his inner monologue: "You mean it wasn't good for you, too?" But no matter, he forces her anyway, and this time with true violence in his hands and vengeance in his heart: how dare she make this difficult for him?  Doesn't she know who he is?  He's the goddamned vicar, for crying out loud, and he deserves her respect, nay her obedience, no matter how depraved his demands.

Little does he know that Mary, good farm-raised girl that she is, has a wiry strength and an emotional detachment when it comes to the dispatching of animals. Little is he aware that in the pocket of the apron she was wearing when he raped her for the last time, there was a wire for cutting hard cheese.  Little does he suspect she would ever use it to garrote him when he passes out from post-coital rapal exhaustion.

Of course, he can go to the grave resting in the easy assurance that no court of law would ever find in Mary's favor for his murder, and that is what makes this book the utter counterpoint to the Regency novels we know and love. Every time I sit down to revel once more in the exploits of Eliza Bennet or the Dashwood sisters (and I do love them), my readings will forever be altered, because for every Miss Bennet or Miss Dashwood, I fear there were hundreds more of girls like Mary.

NB: I read an ARC of this book, which is already available in the UK and will be published in January 2013 in the US by Harper Collins. I would also like to thank my coworker, Caitlin Caulfield, for planting the seed that Mary's story was the darker side of the same literary coin as Austen's novels.

Posted by As the Crowe Flies and Reads at 12:09 PM