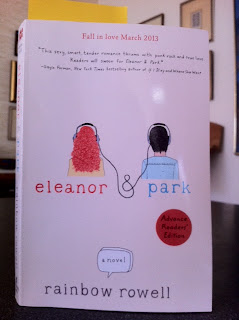 Having read Rainbow Rowell's first book for adults, Attachments, and found it mostly harmless but also without a lot to recommend it, I didn't imagine that I would be feverishly turning the pages of her new book for YA in the wee hours of the morning. But then my coworker Marika pressed Eleanor & Park into my hands a few days ago and said that she thought I'd like it, and I vaguely remembered that Alice over at Reading Rambo (if you don't already subscribe to her blog, do it now. it's the funniest one i follow) had said she also loved it, so what could I do?

Apparently, I could read the book in one sitting, that's what. I had finished a different book called The Colour of Milk last night around 9:00 (about which, more here) and then grabbed this one, thinking I'd read for an hour or so and then call it a night because that's the kind of wild nightlife that I have.  Four hours later, full of bittersweetness, I turned the last page and then turned out the light. God bless sleep masks and my husband's willingness to wear them so that I can read as long as I want to without disturbing him.

What Attachments lacked in substance, nuance, and pacing, this book makes up for in spades. It's wildly funny, but it lacks the current trend for snark that seems to dominate YA dialogue these days (I'm looking at you, John Green), which is refreshing, because while I actually like Snape snark, teen novels do seem to have gone overboard in that direction. The book, set in 1986, also captures the magic, uncertainty, and explosion of the senses that accompany first love, and if you're like me and also fell in love for the first time in the 1980s, then you'll be rewarded with wave after wave of nostalgia as you turn the pages.

So, what is it about, I hear you clamor? It's about love and adolescence and the agony of high school when you don't fit the mold du jour. It's about finding a connection with somebody and having the courage to nurture it instead of retreating. It's about maintaining dignity when the Mean Girls flush your clothes down the toilet during gym class, or when your father is disappointed in you because you're not the son he was hoping for, or when your mother is so in thrall to your hideously abusive stepfather that it takes all the strength of character you can muster to maintain even a shred of self-worth, or when you're so poor that you have to steal a toothbrush in order to maintain dental hygiene. It's about making yourself as invisible and unattractive as possible while you pray that your stepfather won't do what you've been dreading he would do.

I really, really liked this book and it's one of my favorite YA reads for the year, despite some of the dialogue anachronisms and the shifting point of view between Eleanor and Park (though I'm grateful that at least it's a third person narrative and not a 1st person POV).  Ultimately, I think this book captures both the headlong rush and tentativeness of first love, and its sweetness and inevitable ending will break your heart.

Here are some excerpts that I wanted to share:

Eleanor's thoughts after holding hands with Park for the first time: "How could it be possible that there were that many nerve endings all in one place? And were they always there, or did they just flip on whenever they felt like it? Because, if they were always there, how did she manage to turn doorknobs without fainting? Maybe this was why so many people said it felt better to drive a stick shift."

"He put his pen in his pocket, then took her hand and held it to his chest for a minute. It was the nicest thing she could imagine. It made her want to have his babies and give him both her kidneys."

After Park has just been in a fight: "One of his eyes was swollen shut, and his nose was thick and purple. It made her want to cry. And to kiss him. (Because apparently everything made her want to kiss him. Park could tell her that he had lice and leprosy and parasitic worms living in his mouth, and she would still put on fresh Chapstick. God.)"

About one of the school's Mean Girls, whom Patrick used to "go with" in 6th grade: "Are you kidding? Tina's a monster. She's what would happen if the devil married the wicked witch, and they rolled their baby in a bowl of chopped evil."

When Park misguidedly suggests that Eleanor might be the one penning the awful things she finds written on her school books: " 'If I were going to write a note to myself, calling myself a dirty slut," she said it matter-of-factly, "you're right, I might not use capital letters. But I would definitely use an apostrophe...and probably a period. I'm a huge fan of punctuation.' "

NB: I read an ARC of this book, which will be published by St. Martin's Griffin in March 2013.
Posted by As the Crowe Flies and Reads at 10:44 AM

Email ThisBlogThis!Share to TwitterShare to FacebookShare to Pinterest
Labels: book review, YA novels