My husband and I have a travel tradition of thumbing our noses at hurricane season and traveling to the Caribbean during his academic fall break.  Two years ago we traveled with my mom, and for the last two years we have traveled with two of our granddaughters, because one of our other traditions is to go someplace special with the children in our family once they hit their teen years.  Granddaughter #5, Casey, is the one who traveled with us to St. John this year.  We originally picked the USVI for two reasons: we found outrageously inexpensive airfare AND we weren't sure that Casey's passport would arrive in time (as it turned out, it did arrive two days before our departure).
We were headed down the interstate to a hotel near the airport after dinner the night before our 6:00 am flight when we realize we've left our roll of cash at home.  Oops!  Since we were planning to use that for most of our activities, including a daytrip, we had to turn around to go get it. We finally check into the Doubletree by the airport around 9:30 and hit the sack so we can get a little sleep before our 4:00 wake up call.  At the BDL airport we try to get put on standby list for earlier flight out of MIA, but we lack status on American Airlines and told we can only ask at the gate in MIA.  The BDL agent assures that there is room on the flight, however.

Flights both fine,  we sleep on BDL-MIA leg and arrive in MIA 10 minutes early and hustle down to the gate for the earlier MIA-STT flight.  A somewhat gruff gate agent fellow tells us we can only fly standby for a certain fee per person.  Paying to fly standby?! I've never done that before, but admittedly most of my FF miles were with Northwest, now Delta. Fine.  Our original flight price was so incredibly low that even paying the extra per person fee, we come out ahead of what we thought we'd have to spend on airfare. 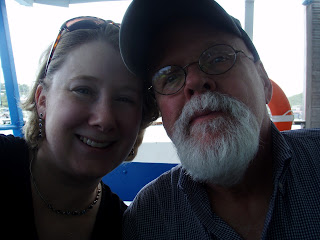 Arriving in STT at 1:00 instead of 3:00, we get a welcome shot of rum--but yuck! turns out to be coconut!  We pile into a taxi and find out the hard way that it's not a private taxi and that not everybody is going to Red Hook like we thought.  Yikes!  We're getting a little upset since we planned to eat at the little bar next to the ferry 'cause we were all hungry, but we have to stop at Sugar Bay and one other place before we get to Red Hook with approximately 2 minutes to spare.  Luckily I still had some trail mix that we snacked on once the ferry embarked. Ferry ride was $6 pp and $2.50 per piece of luggage.  Quick trip, made lots of photos.  Had big grins on our faces.  St. John, here we come!

A few thoughts: Other than downtown Charlotte Amalie, which is a small city, I didn't think St Thomas looked particularly built up--at least nothing like I was expecting to see after all of my reading.  It was lush and lovely.  Certainly busier than my usual preference, but not an island that I would avoid like all costs, as I had imagined.
We had arranged with Gallows Point for them to meet the ferry, so we were a little surprised when we walked off the ferry dock to see the GP lorry pull away with nobody on it.  So I called the hotel again and let them know we were there.  They apologized and within 5 minutes the lorry was back to pick us up for the short drive to GP.  Lovely property.  Surprised how many units in use considering it's low-low season.  Surprised how busy St John is in general in early October.  Definitely would never travel here in high season--too many people! And what exactly is that monstrosity on the hill beyond the ferry dock?  That large and incomplete eyesore?
Our room is great--we booked a "classic" upper harbor view, which means that the interior decor hasn't been redone, for which they waived the $50/night extra person fee to use the sofa bed, so on top of the 30% rack rate discount they were running for Sept and Oct, it was actually pretty affordable for us.  It was a nice size unit with loft bedroom and a/c throughout.  Big louvered doors and windows to throw open to the harbor and breezes (incidentally, our side of the property was breezier during our stay and we probably could have done just fine without the a/c, but it's nice to have at night nonetheless).
Since we arrived two hours earlier than we originally expected, we changed into bathing suits and grabbed our snorkel gear for Casey's inaugural snorkel, which was pretty decent.  We weren't sure we could book the daytrip with Bad Kitty until we had seen how comfortable she was in the water, but everything was fine.  She's certainly not a snorkeling fiend like her older sister is, but she enjoyed it and was quite comfortable with it.

At 4:00 I went back and met with the concierge at Every Ting to arrange for the rental car and by 5:00 I was back in the room with a few snacks for immediate consumption as well as some breakfast foods for the week.

We decided to take the easy way out that night and make reservations for dinner at Zozo's, right on the Gallows Point property.  Sunset was around 6:00, the time of our reservation.  We don't usually eat a lot of Italian food in the Caribbean, but I, at least, seemed to hit all the right notes on the Zozo's menu.  DH had the orange salad, Casey skipped a first course, while I opted for the divine spinach salad with roasted beets and a honeyed truffle vinaigrette.  Mine was superb and about as perfectly dressed as a salad can be.  Moving on, DH selected the roasted eggplant with ricotta and toasted pinenuts, Casey had the housemade tagliatelle with spicy sausage, and I had the gnocchi with peppers, sweet peas, and arugula pesto--all of which were appetizer portions.  Casey, unfortunately, found her pasta so spicy as to be inedible, and DH's bouche was only mildly amused with his dish, but mine was scrumptious and the perfect portion not to overwhelm.  I don't eat a lot of pastas/starches like that in the Caribbean because they tend sit so heavily in de belly, but these were light fluffy pillows of gnocchi and were divine. For dessert the three of us shared the warm chocolate tart, served with vanilla ice cream and topped with a rich caramel, which redeemed the dinner in Casey's eyes.  She said it was one of the best desserts she's ever had.  My own personal rating of this restaurant would be A-, but DH and Casey's experience bring it down to about a B/B+ overall.

After dinner we hit the hottub for about 20 minutes to relax at the end of the day.  DH was asleep by 8:45, DG and I soon after.  Which is just as well, since we planned to be on the beach very early the next morning.
Coming up next: Trunk Bay, Maho Bay, and exploring St. John
Posted by As the Crowe Flies and Reads at 2:30 PM