Book (P)Review: The Midwife of Venice 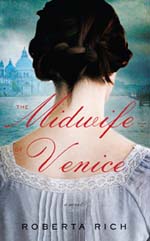 Lordy, it's been so long since I wrote a book review that I'm a little ashamed.  My most recent posts have all been travel related; on the other hand, they also earned me more hits on my blog than all of my book posts combined.  Not sure what to make of that.

But I digress. Last night I finished a book that I had started reading before vacation but didn't take along with me 'cause it was already half-read and who wants to waste good reading time on vacation finishing a book that they'd already started?  Or maybe that's just me, then.  I'm speaking of Roberta Rich's The Midwife of Venice, a somewhat commercial work of historical fiction that is slightly outside the realm of my usual reading.  It's a quick and easy read--in fact, I'd be tempted to call it light, but for the darkness the author occasionally frequently dips into.

It's the story of Hannah, a Jewish midwife living in...wait for it...Venice in the last quarter of the 16th century.  By decree, Jews are not allowed to assist at the births of Christians, but when a certain noblewoman is on the verge of dying in childbirth, the Comte himself visits Hannah and begs her to help his wife. (For somehow Hannah's reputation as a miracle-birther has made its way out of the ghetto and to the ears of the royalty of Venezia.  Yup. That's right.)  Hannah's Rabbi forbids her to go, but help she must.

Meanwhile, Hannah's husband Isaac is telling his side of the story in alternating chapters.  He's sailed for Levant to seek their fortune but instead has been taken prisoner in Malta and sold as a slave.  Nobody thinks it will end well for Isaac--not the wickedly cruel slave trade who buys him nor the slightly-suspect nun who tried to buy him back, not the silkworms incubating in his pocket nor the hot-cha-cha educated lady of Malta who lusts after him.

Meanwhile, back in Venice, Hannah does attend the Comtessa's birth, saving the lives of both mother and babe.  Happy ending, right?  Wrong!  Because the birth of the babe now cheats the Comte's villainous and conniving brothers out of the inheritance they consider rightfully theirs.  Bad things ensue for both Hannah in Venice and Isaac in Malta.

Basically this book is chock full of the good stuff (or possibly the bad stuff, depending on how un-cliched you like your fiction).  It's got slavery, villainy, plotting, scheming, anti-semitism, misogyny, courtesans, accusations of witchcraft, the plague, murder, daring rescues, Ottoman wetnurses, and even the Inquisition--which I actually was half-expecting because, you know, it's Venezian and not Spanish.

As I said above, this book is eminently readable if not exactly literary.  I fully expect to hear soon that the film rights have been sold and that lots of beautiful people have been cast and that it will win awards for best costume, etc. I received an advance reading copy of this book from my lovely sales rep John Muse and it will be published in the US by Gallery Books in spring 2012.  It has already been published in Canada by Random House.
Posted by As the Crowe Flies and Reads at 8:57 AM