This week's book blogger hop, sponsored by Crazy for Books, asks who our "all-time favorite book villain" is.  I'm not crazy about the wording here--I'd rather pick best villain over favorite villain, but for once, I'll try to quit quibbling over semantics.

I think Thomas Harris' Hannibal Lector from The Silence of the Lambs, is one of the best, most chilling villains ever created.  And when Sir Anthony Hopkins brought him to life on the big screen, he played him to perfection: courteous, brilliant, engaging, cunning, and devastatingly sick & twisted. 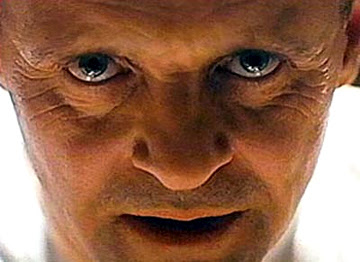 However, one of my favorite fictional characters, whom most readers thought of as a villain for longer than anybody with sense really should have, is Severus Snape from the Harry Potter series.  Admittedly, I'm a Snape fan, have been since book one, and, possessing the ability to differentiate "not nice" from "evil," I've rested comfortably in the knowledge that my convictions would play out in the end.  Much to the chagrin of all the Snape-haters who then had to furiously backpedal and do revisionist histories of Hogwarts when they discovered he was not actually evil after all.

And as with Hannibal Lector, it certainly doesn't hurt that Alan Rickman plays Severus Snape in the film adaptations of the series!

Posted by As the Crowe Flies and Reads at 10:58 AM