Call Me Ish: A Tale of Kazuo Ishiguro and His New Book 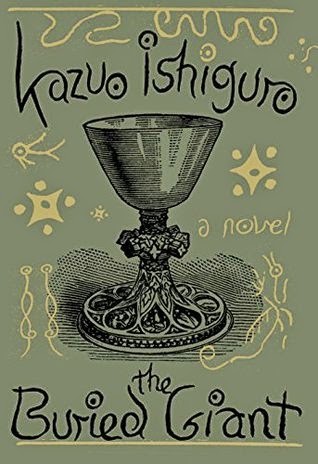 I read Kazuo Ishiguro's most recent novel, The Buried Giant, a few months ago. I'm not a completist when it comes to Ishiguro, but I know enough to admire him greatly for being a different writer out of the gate, every time. I read When We Were Orphans and Never Let Me Go, and I've seen the film adaptation of The Remains of the Day, three radically different kinds of works. Thus, I was pretty excited to read his new book to see what he would do next.

The Buried Giant has a very different narrative style, which is fitting, considering that he's tackling the interrelated philosophies of memory and forgiveness, but placing them in an early medieval context.  His is a world peopled with Angles and Saxons and Britons (oh, my!), one generation after the death of King Arthur. With the exception of very few individuals who seem immune to it, there's a fog over the land that obscures memory.  When we meet Axl and Beatrice, our two older adventurers in this book, they have been struggling to remember their son. They have the feeling that something went terribly wrong, some time ago, without quite remembering what led to their estrangement, and they would like to travel to his village to see him one last time before they die.

On their journey, they encounter some amazing and mysterious and creepy things, including a village that is harboring more than one dark secret, a soldier-warrior on a quest, and the last of King Arthur's Knights of the Roundtable, who, doddering though he may be, is in dogged pursuit of the last task that his liege had set for him many decades ago.

There were many points during the reading where I was strongly reminded of both Beowulf and The Lord of the Rings (with hints of humor that occasionally pointed to Monty Python), but that quite possibly points at my own deficiencies as a reader, as much as anything. I read medieval literature in grad school, but I'm not  particularly well versed in contemporary fiction where dragons and quests cohabitate with knights and monsters, so there may be more appropriate comps out there.

More than anything else, though, this novel is working on many levels, both literal and allegorical.  I enjoyed Ishiguro's book, but I'm not sure that I understood it, precisely.  I tend to be a bit too literal a reader to grasp nuance on the fable level, and as I turned the last page, I wasn't quite sure what I had read.  But these months later, there are still images and passages and ideas in this book that haunt me. I feel that Ishiguro is a giant among his peers, and I'd vote for him as Most Likely To Be Read In 100 Years.
Which is why it was such a great pleasure to spend some time in his company this past weekend. My co-worker, Nancy, and I drove to Boston with a carload of more than 300 copies of The Buried Giant to get signed for our store's First Editions Club.  Mr Ishiguro was there with his wife, Lorna, and they were both so lovely.  Almost in one voice, as Nancy and I introduced ourselves, they exclaimed, "Call me [him] Ish." Biting back an urge to add "-mael, " I did as they requested.

Some readers like to be on a first name basis with writers.  Not me.  I think I prefer to be on a monosyllabic basis.

Anyway, we spent our time passing books to Ish to sign, and packing them back up in their boxes, all the while chatting about his tour, the rise of the importance of social media, "power readers" vs casual readers, the Oscars, and whatever other tidbits of conversation came up. They were so gracious and charming that I was sad when Ish signed the last book so soon.

Here are a few photos of the signing and of the book itself, which vies for most beautiful trade book produced this season (Aquarium by David Vann, published by Grove Atlantic, is the other).


NB: This book was published by Knopf in the US a few weeks ago, and I read an advance reading copy that was provided upon my request by my wonderful sales rep.
Posted by As the Crowe Flies and Reads at 8:31 PM