Book Review: The Invention of Wings by Sue Monk Kidd 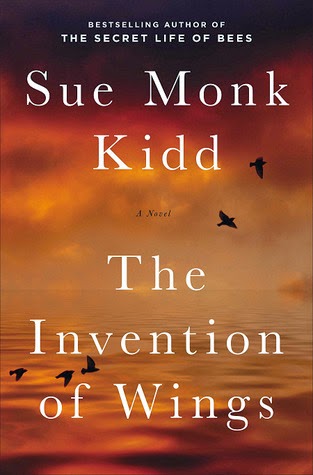 I'm not sure why, but when I heard last year that Sue Monk Kidd would be publishing her novel in January of this year, I wasn't especially excited about it.  I'd read The Secret Life of Bees and liked it pretty well, so I'm uncertain where this feeling of disinterest stemmed from, other than after dissecting Kathryn Stockett's book, The Help,  I was a little leery of another one of those Southern novels where white women become the heroes in the story of black women's struggle. (Full disclosure: I loved The Help but I was fully aware after reading just how much the author had appropriated someone else's story in a not-so-nice way.)

But then I read a review of The Invention of Wings on Alice's blog, Reading Rambo, and it totally changed my mind about this book. For starters, Alice gave me a better understanding of what the book was about--I'd no idea, for example, that the Grimke sisters in this book were actual historical figures of great import in the abolitionist and proto-feminist movements. The thing is, these Grimke sisters did some pretty kick-ass things, so how is it that I'd never heard of them before reading Alice's review and then reading this book? In fact, I'm pretty sure my review here is mostly just gonna be a summary of the story and how much I liked it, so please read Alice's review to get a better sense of things. She's way funnier than I am and you'll enjoy it more. She's basically already said everything I want to say anyway, including excerpting one of the same passages that I'm going to use and commenting on how the Australian book cover is infinitely superior to the US one.

So, The Invention of Wings opens in Charleston in 1803 and is told in alternating points of view from Sarah Grimke, a daughter of one of the city's most prominent families, and Hetty/Handful, the little slave girl who is given to Sarah on her eleventh birthday. I don't know if it's white guilt, or our contemporary inability to truly grasp the horrors of slavery, or the general disinclination of writers to describe terrible things happening to children, but Sue Monk Kidd avoids the temptations to backpedal that other writers before have succumbed to.

In other words, she doesn't simplify the relationship between Sarah and Handful, even when they are children. In their own words:

Sarah: "I saw then what I hadn't seen before, that I was very good at despising slavery in the abstract, in the removed and anonymous masses, but in the concrete, intimate flesh of the girl beside me, I'd lost the ability to be repulsed by it. I'd grown comfortable with the particulars of evil. There's a frightful muteness that dwells at the center of all unspeakable things, and I had found my way into it (115)."

Sarah's first act of defiance is to try to free Handful on the first night she's been given to her, but her family, who owned seventeen slaves in their Charleston house alone, not counting the ones working on their Low Country plantation, will not hear of it. Her second act of defiance is teaching Handful how to read, and these bold courses of action as a girl lay the groundwork for the woman she eventually becomes.

Handful, on the other hand, keeps a weather eye out for Sarah's mother, a rather harsh mistress, and learns at her mauma Charlotte's right hand how to sew and how to channel the feelings of rage and impotence that are a slave's birthright into something productive: making a story quilt and secreting money away to buy their freedom. Charlotte, clever and talented in equal measure, gets up to her own acts of defiance until one day she's caught, with truly terrible consequences.

Sarah's and Handful's chapters alternate seamlessly, and Kidd serves both voices well. Eventually both girls grow up and their lives take on radically different directions; Sarah's to the North, where she falls in with the Quakers, and Handful's to the new, radical African Methodist Episcopal church where both slaves and free blacks secretly work to create an uprising in Charleston.  Both moves turn out to be disastrous until each woman decides, with a certain grim determination, on the course of action she must take.

The book ends in 1838, twenty-five years before Lincoln signed the Emancipation Proclamation into law, and by the time Kidd concludes her story, there have already been many inroads made against slavery in the United States, thanks in no small part to the tireless efforts of one Sarah Grimke, upon whom half of this novel is based. While I wouldn't say that The Invention of Wings is particularly literary, it does exactly what literature is supposed to do: inform, entertain, disturb, and engulf the reader in a story that is not the reader's own. I loved this book and found it nearly impossible to put down. I unreservedly recommend it to anybody who likes historical fiction, novels with strong female characters, and stories with a true emotional heft.

NB: Viking published this book in January 2014 and I read an advance reading copy that was sent to me at the publisher's initiative.
Posted by As the Crowe Flies and Reads at 8:48 PM