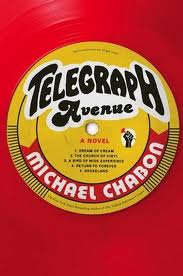 I just want y'all to know that I am a dedicated hostess for this here readalong.  Now in some circles that might be grounds for assuming that I've made cucumber sandwiches with the crusts cut off, at least two kinds of tea, and mini-cupcakes (or some such) because the emphasis would be on the word hostess.  Please redirect your attention to the word dedicated, for as I type, this is the view I'm looking out at: 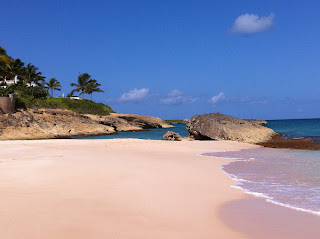 It's my last full day of vacation, and yet I've somehow remembered through the fog of reading, sun, & snorkeling that tomorrow is the first official post in the Telegraph Avenue readalong, which means I must figure out how to do the linky thing.  Wish me luck!

So let's talk about this book and this author and all of our hopes and dreams for the readalong, shall we?

Before I picked up Telegraph Avenue, I had only read one Michael Chabon book before--his collection of essays called Manhood for Amateurs, which I apparently never reviewed here because I read it before I had my blog.  But I rather liked it, despite not being a man.  Funny how that goes.  Somewhere in my house I'm pretty sure I've got a signed first edition of the Kavalier & Clay book (which I've never read), because I was lucky enough to join a first editions club where it was the monthly selection,  and lurking nearby is a first printing of Mysteries of Pittsburgh, which I somehow recall picking up to read without managing to retain the recollection of it--perhaps I didn't finish? Oh, and I also watched the film adaptation of Wonder Boys, and that is the extent of my Chabon experience.  So I think it's safe to assume that I am not a leading Chabon scholar, though I do know how to pronounce his last name, which is actually more than some putative scholars know.

In preparation for hosting this hop, I also googled the names of each of the book's sections to see what they mean or perhaps to see if they were song titles.  Because that's just the kind of in-depth research and analysis I'm prepared to give this month.

I'm not gonna get all spoilery here for the actual discussion bits of Telegraph Avenue, but I did want to share with y'all a summary, paraphrase or two, and one direct quotation from Chabon's breakfast address at BEA.  He is a very good speaker, both earnest and funny, and I wish I had an actual video clip to show you, but apparently he's one of two breakfast speakers at BEA (the other one was Zadie Smith, who was also quite good) who did not get recorded because, you know, apparently it was far more important to record Jimmy Fallon and Kirstie Alley that morning for posterity. (They were the deadliners headliners.)

So anyway, Chabon takes the stage after Alley introduces him (and Alley was actually pretty funny, not a deadliner at all, but that was what my fingers accidentally typed the first time around) and he proceeds to tell us all why he chose to write Telegraph Avenue.  The short version is that he grew up in a planned neighborhood with lots of black & white people living in harmony but then he became an adult and moved around in mostly affluent white circles, when he realized that his teen self most likely wouldn't have approved of his adult self.  The long version starts with the black & white communities' very different reactions to the O. J. Simpson trial, moves on to the institutionalized racism that he'd unwittingly become a part of, and ends with the "apartheid of consciousness" that very much still marks the American landscape.

In other words, Michael Chabon was talking about race in America in a very open and honest way at 8:30 in the morning, and that was enough to get me to sit up and take notice.  You see, most people don't really address race in America, openly and honestly, at any time of day, much less over breakfast.

Tune in next week when we talk about the book itself.  Be there or be a rhombus with equal sides and equal interior angles, y'all!

Telegraph Avenue will be released in September 2012 by HarperCollins, who provided the ARCs for this readalong. If you're already intrigued and would like to pre-order a copy for yourself, please click here.

If you're participating in the hop, please post the link to your post below!
Posted by As the Crowe Flies and Reads at 12:01 AM