My husband took a wrong turn at Albuquerque 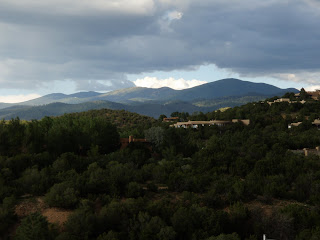 Storm in the Sangre de Cristos mountains
Nothing wrong with channeling Bugs Bunny! So when I had the chance to join my husband in the southwest for a couple of days while he was teaching at a week-long workshop, I jumped at it. And quoted Bugs, who, after tunneling underground across the US, sticks his head above ground, looks around, discovers he's in the wrong spot, and exclaims,"I musta taken wrong turn at Albuquerque." Which he pronounces like "Albakoikee." You with me? No? Oh, well, never mind. When my husband was late to pick me up at the airport at ABQ, it was because, in fact, he had taken a wrong turn in Albuquerque.

It was my first time to visit New Mexico, and unless you count Sundance, UT (which I think is just full-on West and not Southwest), it was my first time in the American southwest. Santa Fe is as charming a small arts town as I've ever seen. I should know; I live next door to Northampton, MA, and those two towns vie for the #1 spot on the various best-of lists for small towns & the arts. My husband has been making the week-long pilgrimage in August each year for almost as long as I've known him in order to teach at the Image conference at St. John's College. He's made some life-long friendships there, and it's also a place that renews his spirit in a way that no organized religion could. He fondly (and perhaps a little self-consciously) refers to himself as a deeply religious agnostic reprobate. Race & religion are the two main defining factors in his life, and growing up in pre-civil rights era Tennessee, you can imagine it wasn't an easy juxtaposition. 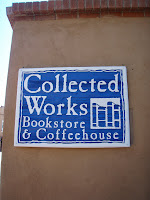 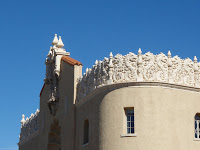 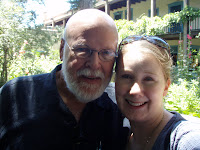 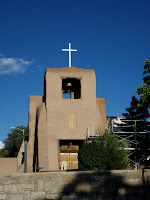 Clockwise from top left: a great bookstore, the local theatre, the oldest continuously
operating church in the US, and a double self-portrait over lunch 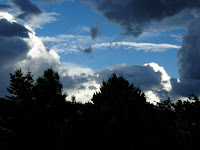 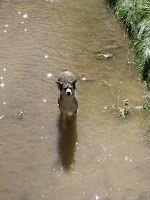 Intense clouds behind the college, a cute pooch playing in
the "river" that runs through the downtown. 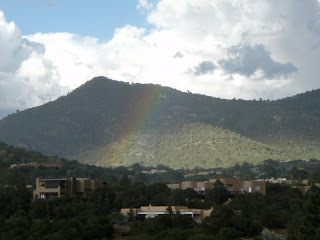 Apparently there's a pot of gold at St. John's College!
Posted by As the Crowe Flies and Reads at 9:00 AM