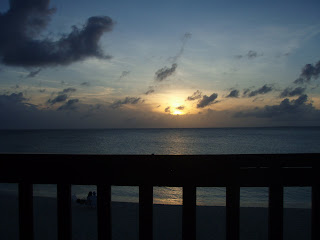 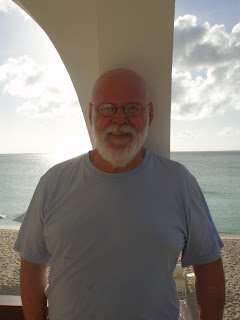 DH on balcony at Carimar. 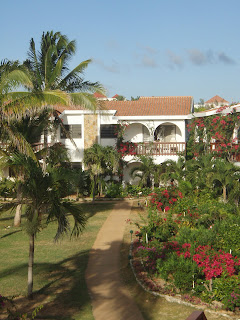 Breakfast in the villa again, this time a light one in preparation for lunch out. So we had toast, coffee, and fruit and spend the morning swimming and reading at the villa. Around noon we moseyed down to Spice Island Beach Resort, which is quite possibly our favorite place to lunch on the island. We got there a little early so we sat at the bar to sip a couple of Tings until they were seating. I had a chicken dish served with rice & peas and DH had the octopus and squid salad. Mine was very good, his was marvelous. We shared some sorbet. Two Tings, a gin & tonic, a frozen fruit punch, plus tax & tip brought our total to about US $55.

We had originally planned to go back to Morne Rouge for the afternoon but decided that it wouldn’t be worth it to rent beach chairs for just two and a half hours. So we headed back to Turtleback instead. I swear, we usually get out and explore a LOT more than we did on this trip, but this time the siren call of the villa was just too strong for us to resist. We were acutely aware that this was our last day in Grenada, and despite having our time in Anguilla to look forward to, we were sad about leaving. Because of the awful schedule from American Eagle, 6 nights in Grenada is really only 5 days and in retrospect I should have just planned a longer stay there.

That night we gussied up a bit and headed to the Aquarium for dinner. Service was just lovely, the setting is beautiful, and the food was excellent. For only the second time on the island I ordered an entrée instead of 1-2 appetizers and it was delicious—mahi mahi prepared with garlic & butter and served with a variety of veggies. DH started with the crab claws and then moved to the seared tuna, both appetizers. We shared a wonderful brandied banana crepe for dessert. Three cocktails and one fizzy water brought the total to EC $191.

This trip we noticed that overall, ordering 1-2 appetizers per person is a more economical way to dine out, with the bonus of having just the right amount of food. I can’t tell you how many times I’ve strained to consume larger entrée portions in the past and came away from the table feeling bloated and heavy. Yeah, I know. You’d think it would be common sense not to overeat, but it’s a constant struggle, I’m afraid.

Started and nearly finished Beowulf on the Beach.

We had to ask the villa owners for a wake up call because there is no alarm clock in the villa—unfortunately, because of the awful American Eagle timetable, this meant that Sharon had to wake up at 4:45 a.m. just so she could wake us up. But when your flight is at 6:45, what are you gonna do?

Our flight left Grenada on time, leaving us with about 3.5 hours in SJU to cool our heels. The food situation has only slightly improved with the addition of a Cinnabon. So we settled in to share a pecan roll and then alternately read or watched folks come & go in the terminal.

Our flight to Anguilla was delayed by over an hour, so we grabbed a personal pan pizza from Domino’s to share before the flight. Once we were in the air, minor disaster struck. An old man in the row across from us passed out and had to be administered oxygen immediately. Apparently he was diabetic and had very low blood sugar and the flight attendants made a panicked inquiry for a doctor or nurse on board, but eventually he came to. Fortunately he was recovered sufficiently to leave the airplane under his own steam by the time we landed.

We rented a car from Avis online and requested picking the car up at the airport, but when our confirmation came back by email there was no mention that we’d have to take a taxi to the car rental facility. So US $20 poorer (!), we struck out on our own in a new looking Hyundai. At the car rental place we were given a map that reminded us of our time on Vieques: in the upper corner it read, “Not to be used for navigational purposes.” Thus, between the map and the lack of street signs we took two wrong turns finding our way to Carimar. Still, it was fun getting the scenic tour of the island, and almost 12 hours exactly from the time we woke up that morning, we found ourselves at Carimar to check in.

The two LaVernes at check in couldn’t have been more warm or welcoming and soon we were settled into #603, an upper beachfront unit. It was open and airy and larger than it looked online. They considerately start you out with one large bottle water, two cans of Coca Cola, and a small bottle of rum. We couldn’t have been more pleased, especially knowing that our rooms were larger, closer to the beach, and about half the cost of those at the neighboring Malliouhana.

For dinner that night we made our way to B&D’s BBQ where we gorged ourselves on ribs, chicken, slaw, fries, and rice & peas. One beer, one water, and one Ting brought the total to US $24, not including tip. It was a real treat and one of our favorite ways to dine—food was being prepared at someone’s home, with a few tables & chairs set up around the food. Grab your beverages from the cooler, make small talk with the local folks who’ve come for takeaway, and bliss out to our first meal in Anguilla. We made a brief stop at Christine’s for a couple of provisions and even made it back to Carimar to watch our first Anguillian sunset. It was rather subdued but we were thrilled nonetheless to be able to watch it from our balcony with cocktails in hand.

I started and finished Vikas Swarup’s Q & A, which was made into the film the world knows as Slumdog Millionaire, which I quite enjoyed. Though the intricacies of the book’s plot were vastly different from the movie’s, I was happy to note that the spirit of the book was preserved in the film. 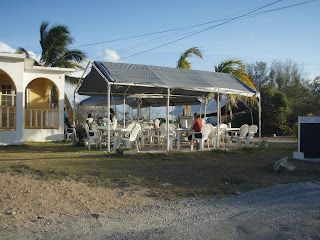 View of B&D's BBQ from across the street. We missed dining next to Mr. Ford and Ms. FLockhart by exactly one week, apparently. DH was disappointed, as he had met Mr. Ford at one of his gallery shows in LA a number of years ago, and would have liked to see him again. 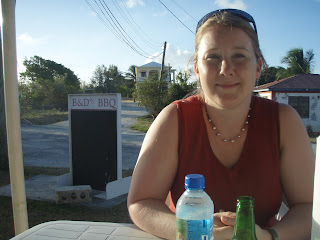 Good--you can't tell how much my mouth is watering while I'm waiting for the big ol' platter of food!
Posted by As the Crowe Flies and Reads at 11:36 PM