Caitin Moran Readalong: How To Build a Girl, the Middle, but not the Middling 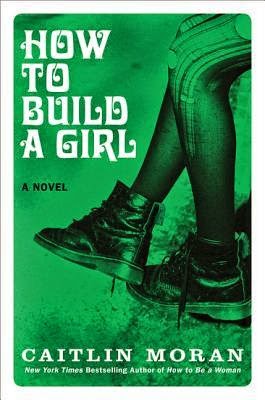 Welcome to the Great Caitlin Moran Readalong of 2014.  A nifty group of bloggers are discussing her novel, How to Build a Girl, almost in a play-by-play mode.  We're all thankful to Harper Collins, who is sponsoring this pre-publication readalong. This book isn't published in the US until September, but if you like what you see, we'd love for you to pre-order a copy here.  Beware: ahead, there be spoilers, so read at your own peril!

When we left off last week, Johanna had just mortified herself on live television by imitating Scooby Doo, landing her entire family in a world of humiliation and teasing.  She had just decided that she wanted to die. Luckily for us, she meant that in an entirely metaphorical way, and she spends the opening chapter of this week's portion trying to decide what name would best suit her going forward. In her own words, "It's got to work in print -- it must suit black ink -- but it also needs to sound cheerful when shouted across a bar. It must sound like a joyful yell."  Juno Jones, Eleanor Vulpine, Kitten Lithium, Laurel Canyon, Belle Jar, and Dolly Wilde.  Which one will she choose?

Having chosen "Dolly Wilde," she seeks out her fortune amidst the goths of Wolverhampton, only to be rejected. She tries to connect with her goth cousin but that's a no-go: "I shift awkwardly. I'm pretty sure I've read this correctly -- that this is the outpost for loners. That, culturally, this is what I should be filed under...People with no upper body strength, who read poetry. These are my people. I am wearing a black waiter's jacket, black boots, black tights, and so much eyeliner that I look like a puffin. Given this effort, I thought the counterculture would just . . . let you in. I didn't know there was an interview process."
Later at a family reunion, though, that same goth cousin ends up giving her a piece of valuable advice: fake it 'til you make it. The rest of chapter eight is an exploration of Dolly's goth phase and the phrase "I am the bastard son of Brendan Behan," which makes no sense to me because I do not understand the cultural reference, even after doing a Google image search. Help?

Eventually she gets a second piece of valuable advice from an unlikely source: her father tells her she should write, not just talk about being a writer.  Totally obvious on the surface, but *so* much more difficult to live by.  She gives it a pretty good shot, though, and puts together a pretty impressive body of record reviews:
We also get the lowdown on the history behind her father's injuries and inability to keep a job.  I'm telling you, Caitlin Moran can do more with two small paragraphs to sum up a character's backstory than just about any other author I've read recently:


"If you want to know why we're poor, and why Dadda doesn't have a job, here's why: back in our house. By Dadda's bed. A big, white pot of pills. Daddy's pills.

Daddy was in a band, and when they didn't make any money, he got work as a fireman, and one day -- it was a very bad day -- he got trapped on top of a burning factory. And when he woke up in hospital, they told him he'd broken nearly a quarter of all the bones in his body when he jumped."

In chapter 9, we've moved forward abruptly two years, and the narrative switches (also abruptly, but just temporarily) from Johanna's first person POV to a close third person focusing on Dolly Wilde. In fact, it feels less like third person per se and more like Johanna has simply started referring to herself in the third person as Dolly Wilde.  She goes to an interview in London with Disc & Music Echo (D&ME) for a music journalist position.  She somehow flubs the interview, but in the next chapter she's got the assignment, so I think I missed something, somehow.

In chapter 10, Johanna/Dolly is back to narrating in the first person and she gets her first real gig: covering a Smashing Pumpkins concert in Birmingham.  This leads to her first review being published, her dropping out of school, and her being invited to do her first musician interview...in Dublin.  Things are clearly happening for Dolly, but are they all good?  Can she really just drop out of school like that? And is there not some UK equivalent to the GED that she could sit for?

Tune in next time, when we see what happens in Dublin and beyond!

NB: Y'all, I'm sorry that this post is so simple this week, but we had some troubles with our dog and one of our cats this weekend and the time I had set aside for reading our chapters and then responding to them was otherwise taken up by the animules...

Posted by As the Crowe Flies and Reads at 12:12 AM