Harry Potter and the Half-Blood Prince: Part the First

Harry Potter and the Half-Blood Prince is one of my favorite books in the series -- it's got the most Snape action, you see. It's been several long weeks since I fully participated in Alice's Harry Potter Readalong, so I'm very happy to have the time to do it this week. She is officially the bestest for hosting it.

Chapter One: Info dump.  Bor-ing.  Though I always enjoy getting chapters written without the dubious benefit of the Harry Filter.

Chapter Two: I think we can all agree that this chapter is made of undiluted awesomeness. If I didn't already love Snape, this chapter would still make me swoon.  Bellatrix's passionate hatred met with Snape's snarky parries each time. "Of course, you weren't a lot of use to him in prison, but the gesture was undoubtedly fine."  And the interplay between Bella and Narcissa--so terrible, so revealing about each sister.  There's very little I don't love about this chapter. But it makes me wish quite desperately that Narcissa had reached out to her other sister before it was too late. I think it's clear that Narcissa has no allegiance to the Dark Lord at this point--her not reconciling with Andromeda is one of the missed opportunities in this series that makes me most sad.

Chapter Three: So much good stuff in here, and I'm not saying the Dursleys don't deserve it for their legacy of abuse toward Harry, but it seems to me that Dumbledore is engaging in a bit of muggle-baiting here.They're terrified of Dumbledore and don't trust to eat or drink anything from a wizard, thanks to the twins, but the glasses of mead keep rapping against their heads in an increasingly violent manner.  Poor form, Dumbledore.  Poor form. But the phrase "but sadly, accidental rudeness occurs alarmingly often" is pure gold. But this one is one of my favorites in the entire series: 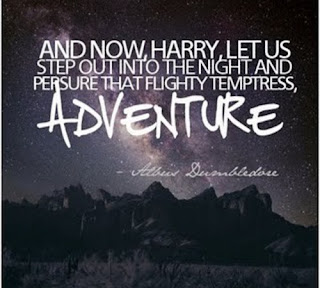 Chapter Four: How did Dumbledore know that Slughorn was still there, transfigured?  Does he know Slughorn's style so well, or is it that he was picking up on some sort of magical signature from his black, deadened hand? Probably both.

Chapter Five: Mollywobbles. I don't even want to know what bits of Molly that were so appealingly wobbly that Arthur made it his pet name for her.

Every time I think of Hermione as brilliant, she does something so insanely un-thought out that I want to shake her.  Trying to learn more about that opal necklace is one of those times.  But of course her foibles make her much more real than most of the other characters.

Chapter Seven: As if we didn't know Neville's sexual status of virgin, he proudly declares that his wand is made of cherry and unicorn hair.  If Book Neville looked like Film Neville, this joke would be meaningless. 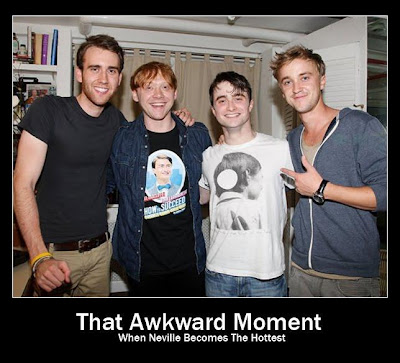 But on to more serious matters: Luna.  Oh, Luna.  Harry, you're blind not to value her as much as you value Ron and Hermione.  Neville, too, for that matter. But at least in this book you're learning, vis a vis his response to Romilda Vane.

Also Chapter Seven: Who the hell throws a luncheon party on a train like that?  Slughorn fawns over Harry the way Lockheart used to fawn over himself.  But at least Ginny keeps on being the coolest kid on the block, so there's that.

Okay, seriously.  There's something I have to say.

If I could turn back time: the Weasley twins are this generation's Marauders.  I missed out on most of the OotP discussion, so please pardon my digression.  If y'all did discuss this, please let me know so that I can check out your posts and respond in the appropriate places.

Anyway, I think we have a pretty good idea what James & Sirius might be like if we had the chance to read their stories: Fred & George.  I've always liked the twins' comic relief in the series, and though I think the application of their intelligence is often misguided, I think they may be the smartest characters in the series.  Perhaps even moreso than Hermione, but I'm not 100 % certain.  Anyway, they blithely stuff Montague in a broken vanishing cabinet for the sake of 10 house points.  Maybe a total of twenty (10 per twin). A broken vanishing cabinet where he could have died of dehydration or starvation, I might add (In the twins's own words: "That could take weeks. I dunno where we sent him."). And while Umbridge no doubt would have expelled both of them for far less, I'm not at all convinced that Dumbledore would have. So there you have the parallel: two bright Gryffindor boys who value their own cleverness almost condemn to death a Slytherin boy. Montague had to try to apparate out of it. Since you cannot apparate on Hogwarts grounds, one can only imagine how he managed to do that... ("he nearly died doing it," Malfoy will tell us later in this book). Fred and George might not have known precisely what would happen to Montague, but it's clear that they knew something would. Weeks? A student missing for weeks?!  But if it's just a Slytherin, then it doesn't really matter, does it?

JK Rowling claims to be anti-bully and that's why she doesn't like Snape, but it seems she can overlook terrible bullying in her Golden Gryffindors. (True: a teacher bullying a student is a different magnitude from a student bullying another student, but why are all of the exceptions made for Gryffindors?
Posted by As the Crowe Flies and Reads at 7:43 AM