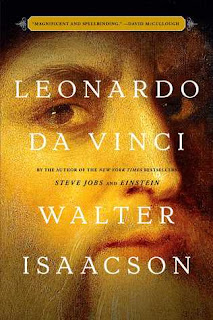 It has been a long time since I’ve read a straight-up biography.  I read lots of narrative nonfiction in the forms of memoir, sure, and I even dabble in history and science.  But I’m trying to think of the last time I read a biography, and according to Goodreads, it was back in 2011 when I read Harriet Reisen’s book on Louisa May Alcott.  Reading Walter Isaacson’s incredible book on Leonardo da Vinci was a welcome reminder that good biographies on interesting subjects are well worth the time invested.

My Simon & Schuster rep gifted me with the audio book for my birthday late last fall, which was ideal now that I have a long enough commute to make listening to audio books worthwhile. It’s read by actor Alfred Molina, who does a great job, and the audio version comes with a separate CD full of PDFs of the art described in the book (presumably the digital audio also comes with downloadable images).  However, I was only two discs into the 17-disc set before I realized that I would also want the physical book, and I was fortunate that Simon & Schuster obliged by by sending me one of those, too. The book is beautiful, printed on heavy paper with full color plates.

I’ve never read Isaacson before, so I don’t know if this is a signature style or a one-off, but rather than employing a chronologically linear narrative, he employs a style that I’d call vignette-like.  This means that occasionally the narrative circles back to an earlier period of history, but with a subject who is as far removed from our time as Leonardo is, this makes sense to me.

Did I have much of an impression about Leonardo before tackling this book?  Not a big one. I took a survey of western heritage class in college that gave an overview of his art and I think it was a class in high school where I learned more about his bent for science and engineering, but other than a general impression that the term “Renaissance Man” might have been first used with him in mind, I couldn’t tell you a lot about the guy. My only personal experience was on a college choir trip to Milan, where we were able to view his fresco of The Last Supper in small groups.

Thus it was a total revelation to learn about this remarkable man with not just a towering intellect, but an insatiable curiosity about the world. Although he is probably best known today for his art (his Mona Lisa is quite possibly the most famous painting in the western world) Leonardo himself wished to be known as an engineer. Although not formally educated, he was a meticulous observer of nature and combining his curiosity with the scientific method means that he was decades, and in some cases centuries, ahead of his time.  There’s hardly a branch of science that didn’t interest him, and Isaacson explores Leonardo’s notebooks to share with the reader his groundbreaking research and theories for physics, optics, fluid mechanics, anatomy, geology, astronomy, even cosmology.

I also enjoyed the way Isaacson brings out the human side of Leonardo, quoting from his shopping lists, or describing his penchant for richly-colored tunics (fuchsia was a favorite) and for beautiful young men, or outlining why he opted for a vegetarian lifestyle.  And those times when Leonardo’s paths crossed with the Borgias, Machiavelli, Brunelleschi, or Michelangelo?  I actually said “whoa” out loud in my car when Molina was narrating those moments. Kind of a who’s who of Italian Renaissance history, eh?

This is a marvelous study of a man who, arguably, possessed the greatest mind of his time -- possibly the greatest mind of any time -- whose drive to always ask “why” should be an inspiration to every single reader. I can’t recommend it highly enough.
Posted by As the Crowe Flies and Reads at 7:54 AM