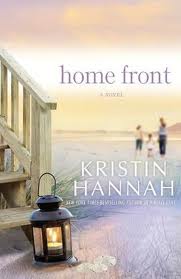 I should be clear up front that a book like Kristin Hannah's Home Front would never be one that I would pick up to read, but I'm less particular about what books I listen to on my daily commute.  There was a complimentary CD version of Home Front (read by Maggi-Meg Reed) available to booksellers and I made good use of it.  It is definitely not my cup of tea, but I do understand what many readers find appealing about her.

Home Front is a story about a family, more specifically about a couple, Michael and Jolene.  Michael is a high powered criminal attorney with little time to devote to his family.  Jolene is the perfect wife and mother of two girls Betsy and Lucy Lu (not to be confused with Lucy Liu, as I first heard her name), but she is also a Blackhawk pilot in the National Guard.  When her unit is called to serve in  Iraq, everybody's life changes.  Before she leaves, Michael tells Jolene he doesn't love her any more and naturally she hardens her heart against him as a means of survival.  At this point, spoilers lie ahead, so be forewarned. I just cannot be arsed to do the whole hide-by-highlighting-the-text bit:  Meanwhile back at the ranch, parents have flip-flopped their roles and Michael becomes a full-care parent with the aid of his own mother, while Jolene becomes more and more distant, both literally and figuratively.  Jolene's helicopter gets shot down, leaving one crew member to do on site and both Jolene and her best friend gravely injured.  Jolene loses her leg and (eventually) her best friend, launching her into full-on depression, but apparently nobody notices or cares enough for her to get counseling.  I mean, who are these people?  Why doesn't someone take note of her mental state? And oh, yeah, she's got PTSD, which her husband conveniently recognizes because his big case is defending a young Marine who shot his wife. Michael & Jolene: will they or won't they reconcile?  Will they become a family unit again? Will bratty Betsy buck up?  Possibly. Will obnoxious Lucy Lu ever stop being obnoxious? Possibly not.

If I sound flippant, it's because I have two major gripes with this story: it's both overwrought and repetitive.  If I read (well, heard) a version of "her old way of life was lost along with her leg" once, I heard it a couple dozen times.  Hannah is, unfortunately, a master of tell, don't show, and apparently telling things once isn't enough for her.  The story is patently formulaic and utterly predictable, which I don't always object to, but it is pretty emotionally manipulative, which I think is a greater sin.  What could have been  a truly interesting book exploring modern gender roles, taking hard look at how PTSD can affect soldiers & their families, and moreover about the way our country has abandoned those soldiers to their own devices without proper mental and psychological care has turned out to be very trivial, indeed. There is a line near the end of the book that I'm paraphrasing, something like, "How can it be more difficult to return home than it is to go off to war?"  I wish Hannah had crafted a more substantive answer to that very compelling question.

(I also wish the book had been better edited.  For example, at one point in the third person narration it says "Michael was literally at the end of his rope."  Why, no he wasn't.  He wasn't literally at the end of any rope--not hanging from one, not being pulled by one. It bugs me when people use "literally" incorrectly and any editor should know better than that, even if the writer doesn't. So in this case, not only is the language trite, the usage is incorrect. Gah.)

This was clearly not the book for me, but I would still listen to more of Kristin Hannah's books if I could get them for free, so I suppose there's that.  After all, I listened to the entire book, and I found myself crying in traffic on more than one occasion. Several, actually--I was drawn emotionally into the story in a way that I wasn't expecting, but that might have as much to do with the good reader as the story itself; it's so hard to say. The author clearly has a strong readership, and I suspect that people who are drawn to Nicholas Sparks' stories (which I also find overwrought, but plenty of people like 'em for what they are) or to Jodi Picoult's style of storytelling would really enjoy Kristin Hannah's novels.

Have *you* read Kristin Hannah?  Are you a fan? Tell me what I'm missing!
Posted by As the Crowe Flies and Reads at 8:42 AM